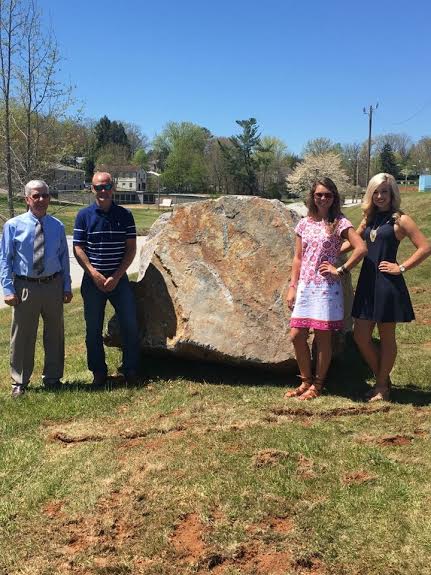 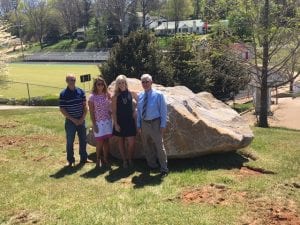 After a lot of planning, organizing, and determination, Franklin High School can finally say that they have a spirit rock.

“This spirit rock can mean many different things,” said Ashlyn Carruthers. “It’s about school spirit but to me it also symbolizes a place that is solid, and a place high school students can call home for four years. We live in such an amazing small town where we have people willing to help make this such a great place to live.”

The process to secure the spirit rock began in September, but has been something that students at FHS have talked about for years.  After getting it approved by staff and the school board, Carruthers met with Gene Farmer three or four times at the rock quarry. “I was able to actually pick the rock I wanted, Gene made it happen, and I got with Brooke Watson and asked her dad to deliver and place the rock at our school,” said Carruthers.

“This spirit rock can mean many different things to lots of people, but overall, Carruthers says it serves as a symbol of school pride – a solid foundation that students call home for four years. “FHS is the center of many facets for our town, and we are so blessed to have such great support,” said Carruthers. “It is hoped that future generations can appreciate this and many new traditions can begin. Traditions such as possible spray painting, writing sports achievements and special recognition for seniors every year. FHS was one of the last few who didn’t have a spirit rock. There are a few special people who deserve recognition for allowing this to happen. Gene Farmer at the rock quarry who donated the almost 35,000 pound rock. Kevin Watson of Watson Contracting, who picked up, delivered and placed the rock at our school. Sports Zone donated the plaque and Habitat for Humanity donated a smaller rock in which the plaque will be placed on. The plaque dedicates the rock to the Class of 2016 and also thanks the people behind the scenes that helped me make it happen. We plan to have a day in which students, coaches, and staff can come together to add landscaping and lighting and make this project complete and beautiful.”

Carruthers said that as Student Body President, she wanted to do something that would make students feel proud of their school. “Being part of the spirit programs, it is so clear that the town of Franklin supports the sports programs of our school and having a spirit rock to display that makes more traditions begin and just can bring us closer as a student body and family,” she said. “I also felt like FHS deserved to have something special like this like most of the other high schools in our area.”

Carruthers and her classmates are now thinking of the best way to leave their mark on the school through the rock. “We have some possible ideas for fundraisers, possibility of making “in memory of” bricks for a walkway, and also looking into the possibility of spray painting the rock and allowing the class of 2016 being the first to do so,” she said. “I know some say it’s just a rock. But it’s more than that. We spend four years of our life here, it’s a meaning of a place that is “solid” and a place to call our other home. It’s a symbol of coming together, traditions, and something that we can make memories and show our Panther Pride in.”