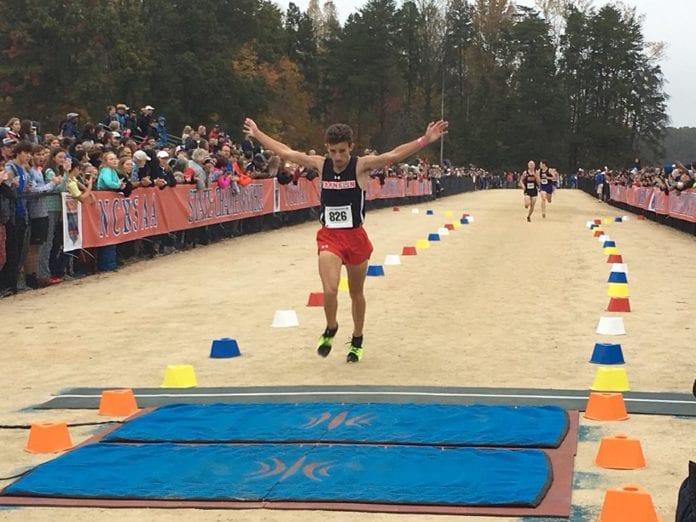 After finishing in sixth place at the 2-A State Cross Country meet last year, Franklin High School cross country runner Nathan Richards spent the months leading up to the 2017 state championship training to improve. His hard work paid off over the weekend when Richards took first place at this year’s State Championship.

Richards is the first individual state cross country champion from FHS in 23 years since Chan Pons won it in 1994.

Richards is a senior at Franklin High School and lives in Franklin with his grandparents. When he isn’t running, he likes to spend his free time reading. With his senior year nearly over, Richard hopes to attend college this fall and hopes to continue running to help pay for his college.

“Nathan Richards had a phenomenal senior season,” said Sarah Lowell, Richards’ FHS cross country coach. “He remained under 17 minutes [3.1 miles] all season even on the toughest courses including our home meet.  He was the conference champion and dipped under 16 for the first time and did it solo with no competition.  It was amazing that he was able to accomplish this by himself.”

Richards won the state title with a time of 16:05, just six seconds faster than this personal record of 15.59 for a 3.1 miles race. Richards spent the entire 3.1 mile race battling for first place and it wasn’t until he was in the final stretch that he was able to secure first place. Right before the finish line, with second and third place runners at his heels, Richards kicked it in high gear and was able to sprint into first place, six seconds ahead of the second place winner.

“The 2-A state championships  was something right out of a movie,” said Lowell. “Dakota Mendenhall of Forbush High School is the all time 2A cross country record holder and was the heavy favorite going into the state championships. The race played out as predicted with Dakota leading the field with Nathan close behind and several other 16:00 [minute] runners in tow. With 400 meters to go, Dakota and Nathan passed me one last time. I cheered for both and headed to the finish line to congratulate them.  There were hundreds of spectators at the finish line so I could not see them approach. The announcer came on and said, ‘here comes our 2017 2A State Champion Nathan Richards.’   I screamed, ‘what?’  We watched the race video the next day and saw Dakota completely give out, he totally collapsed and tried to get up and could not finish with 100 meters to go.  When Nathan crossed the finish line he ran into my arms and he said, ‘coach, I think I’m the state champion.’  I have attended three Olympic Games and have never seen a more stunning or exciting finish. It was a moment in life I will never forget. Seconds later, team mate Grayson Jones crossed the finish in 16:44 for 13th place and congratulated his team mate.”

Richards credits Lowell, Jones, and his other teammates for his victory.

“I would have to say the only reason it was possible is because the non-stop support from everyone including my grandparents and family and mainly my coach, Sarah Lowell,” Sid Richards. “Also the Athletic Director Coach J and of course my team mates like Grayson Jones. I was very pleased with the season after I got rid of all the I injuries and it was great to be able to win conference regionals and state all back to back.”

“Nathan had a great senior year,” said athletic director Jay Brooks. “I am so proud of him. He has put in a tremendous amount of work to accomplish this.  He has had some great teammates that have been accountability partners for him. The Cross Country program as a whole, men’s and women’s have had an awesome year. Great job by our student athletes and coaches.”

Jones was a senior team mate of Richards and also ran a huge personal record at conference, clocking 16:37.  They went 1-2 with a commanding lead over the rest of the field to earn All Conference Honors.

“Regionals was our best team meet of the season,” said Lowell. “Our younger runners including Ethan Stamey and Liam Graham both dropped almost a minute and sophmore Chandler Redoutey also had a major personal record.  Freshman Nathan Stamey had an excellent race as well. Nathan Richards was almost 30 seconds ahead of the next finisher to become Regional Champion.  Grayson stayed under 17 and ran third overall.  Both runners earned All Region honors for the effort.  Our team was ranked 7th going in and finished 12 points out of second.  The determination of this team to do what needed to be done to qualify for state is something I will not soon forget.”

“Junior Seth Gurney also had a stunning finish as he clocked 17:11 to finish 31st,” said Lowell. “This ranked him 5th in our conference and 8th in our region.  Amazing for someone who’s first sport is soccer. The Stamey twins, as well as Liam and Chandler, all ran solid races and now have a state championship race under their belt.  All ran times comparable to Nathan Richards’ freshman year performance at state, something they all take pride in.  They also understand now the work that needs to be done in order to become the best runners they can be.”

Lowell said Richards embodies what hard work means, especially in terms of high school sports. When Richards first started running, he was the bottom of the barrel, but with hard work and dedication to the sport, he earned the top spot.

“Nathan Richards has had an incredible career in high school cross country,” said Lowell. “This is a person who ran his first high school race in 27 minutes and came in almost last.  He was very small and unsure of himself.  During the course of that first season, all that began to change.  Each year he became faster and stronger.  His sophomore year he began attending summer running camp and running year round.  Nathan has become a student of running. To cap off his senior year as Conference, regional and state champion was a dream come true for both of us.  He has worked hard and will continue to grow as a runner. I could not be more proud of him and the entire team for an amazing season.”

Panthers move into second round of state playoffs