Franklin High School (FHS) began its winter sports schedule recently with both wrestling and swimming programs starting regular seasons in mid-November. Men and women wrestling teams are coached by Coley Tyler, who also happens to be a retired Lieutenant Colonel from the U.S. Army. According to Tyler, the season has been, and probably will continue to be, challenging given the limited availability of wrestlers.

“We have a very small team and can only fill seven of 14 weight classes when we have everyone healthy and eligible,” said Tyler.

In total, nine boys and four girls make up the teams. On the positive side, Tyler also stated that while currently 1-7 in dual matches (one team vs. one other team), “[FHS] has competed in three individual tournaments and brought home three 1st places, one 2nd place, four 3rd places, one 4th/5th place each, and one 7th place.” These records are evidence that while a smaller overall team compared to some programs, FHS wrestling participants are so far placing respectfully in matches. While the regular season is made up of 18 matches, only three will be hosted by FHS, which presents its own challenges for Coach Tyler and the Panthers.

The past week’s meets included a Dec. 10 men’s (Nation Call Out Duals) at Pisgah and women’s (Falcon Frenzy) at West Henderson, plus a Dec. 13 quad meet hosted by Franklin that included Tuscola, Pisgah, and Robbinsville. The men took third and fourth-place team finishes at Pisgah, while the Lady Panthers were led by Abby Carpenter, who took first place (individual) in the 126 lb. weight class; her total point score was 9-2, which she won by a fall over Angelique Zaleski (North Buncombe).

While not yet a sanctioned sport, according to FHS Athletic Trainer Lynette Gibson, “next year in the state of North Carolina, it (women’s wrestling) will be an official sport, although many schools are already including it as part of their sports programs. In 2023 it will be a completely separate sanctioned sport.”

Coach Tyler revealed the blueprint he is using to build up the program.

“Following three years coaching the middle school wrestling program, I took on the high school head coaching position this year.” That change affords him the opportunity to both coach current freshmen-senior wrestlers but also will allow him to again teach, train, and guide the incoming students he coached previously. While he admits Franklin is not yet at the level of some other Mountain 7 wrestling programs, such as Robbinsville and Pisgah, Coach Tyler sees progress every match and strongly believes each year will bring improvement for Panther wrestling. He emphasized that working together with Jimmy Barnett, the head middle school coach, creates a great environment for the students.

“I accepted this position with the design of having a group of people who have coached together at every level of wrestling in Macon County from high school to middle school and also with youth,” said Coach Tyler. “We’ll have kids now who are both used to the way we (FHS) wrestle but also are connected and familiar with the different levels of wrestling.”

With six matches so far, Tyler indicated he is hopeful the team can learn as they grow with some more wins and pins along the way.

The wrestling Panthers are conducting their team community service project of collecting food and winter clothing this week. If interested in donating, boxes are set up in the high school main office through Thursday, Dec. 15. 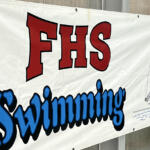 FHS swim teams are midway through their regular season as well. The team recently competed in the fourth of seven scheduled season meets on Dec. 10 with the Candy Cane Classic at Murphy. Franklin swimmers broke numerous freestyle records during the meet. Specifically, sophomore Gavin Rinker surpassed a time previously held by a Smoky Mountain swimmer 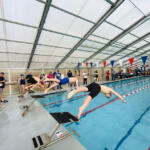 With the relatively sparse availability of indoor pool space throughout the Mountain 7 conference, Franklin will actually end up hosting nearly half of the meets for the season (three), with Buncombe hosting three, and Murphy just the Dec. 10 meet. An additional challenge faced by swim teams is the times and days pools are open for use. This resulted in the Panthers traveling to Asheville for a meet on the evening of Friday, Dec. 2, only to then host a meet the next day at the Franklin Fitness Center.

The FHS swimming program has been led by Dina and Dwain Picou for the past 20 years, providing plenty of continuity and experience for the Panthers. Each meet normally consists of at least 22 events, while two more can also be added for diving when facilities permit. Out of the four meets held thus far, FHS has finished first in overall combined team scores each time. The Panthers’ combined team score was the best out of five teams Nov. 19; four teams Dec. 2; two teams Dec. 3; and six teams Dec. 6. The head coaches have high hopes for finishing on top this season and so far, so good.