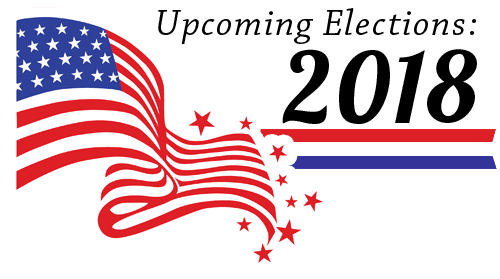 Election season will officially kick off next Monday when filing opens for the 2018 elections. Nearly a dozen local seats will be on the ballot this November, and starting next week voters will have an idea of who to expect as potential candidates. Macon County residents will have 10 races on the ballot including Congress, NC Senate, NC House of Representatives, District Attorney, three board of commissioner seats, register of deeds and clerk of court. Incumbents in every single one of those races have already announced their plan to seek re-election.

Congressman Mark Meadows was elected to office five years ago and plans to file for re-election to continue serving WNC.

“I’m running because I still believe Washington is in serious need of leaders willing to stand up, challenge the status quo, and return power back where it belongs – in the hands of the American people,” said Congressman Mark Meadows. “In my nearly three terms in Congress, I’ve been committed to helping fill that void of leadership – to fighting for Western North Carolinians and advocating for conservative principles, such as smaller government, lower taxes, and reducing regulations on local businesses and families. There’s no disputing that Washington is a mess, and we certainly have a long way to go – but I believe we’re making tremendous progress in the fight. I’m determined to continue.”

Jim Davis is in his eighth year in the North Carolina Senate and plans to file for re-election on Feb. 16, as he is currently in Raleigh.

“I am seeking reelection to continue the work of tax and regulatory reform,” said Davis. “As Senate chair of transportation I have opportunity to positively impact transportation needs in the state.  Also, we have more work to do regarding the opioid epidemic, e.g., how we deal with pain clinics.  There are many other reasons but those are the priorities.”

Kevin Corbin is in his freshman year in the House of Representatives and will be filing for re-election.

“I have enjoyed my freshman term and have gotten a lot done for Western North Carolina, despite being a ‘newbie,’” said Corbin. “Now that I am not a freshmen, things will be easier and even better.  I have a passion for WNC and its people and take great joy in sharing which district in N.C. that I represent.  House leadership has suggested to me privately that I am being considered for a couple of leadership positions. I am not counting on that but would consider that an honor to achieve that in my second term.”

Macon County Board of Commissioners

Jim Tate is in his seventh year serving on the board of commissioners and plans to file for re-election next week.

“To be honest, I love and am committed to my home, Macon County, so the decision to want to continue to govern was easy; however, I couldn’t help but ask myself just how good of a job have I done and am I the best person to lead our county moving forward,” said Tate.  “Well, the answer to my personal question has been overwhelmingly answered as a ‘yes’ over the past few weeks, as I have been completely blown away by the tremendous amount of outreach and votes of support that I have received. I guess that I have been so busy with life and with Macon County, that I didn’t realize just how many friends and supporters that truly want me to see me continue to serve as commissioner.”

Ronnie Beale has served as a commissioner representing District 2 of the board of commissioners  for four terms, or 16 years and plans to file for re-election.

“I am seeking another term for several reasons,” said Beale. “First, I am very involved in seeking better and more consistent services  for our citizens seeking mental health and substance abuse help and we have made some progress. I worked to get Macon County a walk-in center. Our mental health task force continues to set the standard for the state in bringing all the stakeholders to the table for open discussions looking for ways to better serve the most vulnerable in our community. Second, I also want to be involved in our capital building plan. I think we can do the most needed projects including the upgrades to the schools with no tax increase. I think my input as a general contractor on these projects can save the county money as we did during the construction of our new schools.

Third, to continue to work to improve the services to our citizens is all departments.  As liaison to several of our departments including the Sheriff’s Dept., Senior Citizens, Building Inspections, Macon Program for Progress and  others, we work very hard in improving these services and maintain spending levels without having to raise taxes and lastly, I enjoy trying to help any citizen with any problem they might encounter with county  government. I am accessible and look forward to working to improve our community even more during the next four years. These are just a few of the reasons I seeking a fourth term. I believe my record shows my main objective has been and will continue to be regardless of  political party I am ready to help all our citizens of our great county.”

Gary Shields is in his first term as a commissioner and plans to file for re-election next week.

“Being an elected Macon County commissioner is not a job but an opportunity to be of ‘service’ to the citizens of Macon County,” said Shields. “In the past three years, as your county commissioner, I realize the time and energy needed to go forward with county business. I had opportunity to work with numerous groups and seeing these volunteers give their time in an unselfish manner, I conclude, volunteers are the ‘glue’ that holds our county together. In conclusion, being a commissioner your service is never done. I would like to accept the challenge to venture forward in problem solving activities with my colleagues in making Macon County the regional leader in all facets of going forward.”

Robert Holland has served as the Sheriff of Macon County for 16 years, first being elected in 2002. He first started with the sheriff’s office in 1991 as a volunteer and later was hired as part time detention/deputy. He was hired full time in 1994 and  worked his way through the various departments of the agency.

“I absolutely intend to file for re-election. I look forward to asking the citizens of Macon County for the opportunity to continue serving as sheriff.  The sheriff election comes only every four years and I look at this time as being my personal employee evaluation completed by the people for which I proudly serve. I look forward to seeing the results of what my community thinks that I, along with my staff, have served Macon County. For my entire 27-year career with the MCSO, I have always been passionate about serving my community and working diligently to make a difference for all our families.  Being elected as sheriff has not changed that.  I am as committed today as I was my very first day in office. While I am proud of the dedicated men and women that serve our community and of all our accomplishments under my leadership I also recognize there is still work to be done. I am confident I am the man to continue leading that charge. I have the knowledge and the experience with proven results to get the job done. I can guarantee the citizens of Macon County that if I am given the opportunity to continue serving as sheriff they will always get the very best of Robby Holland and all who serve at your Sheriff’s Office.”

Vic Perry has served as the Macon County Clerk of Court for 11 years. He plans to file for re-election next Monday.

“After spending 29 years working in the judicial branch, I still enjoy the work,” said Perry. “This is a busy office that does a ton of good work for the citizens of Macon County, and I get satisfaction from coming to work each day and making a real difference in people’s lives.”

The filing period for the 2018 Primary Election will begin on Monday, Feb. 12, at noon and will end on Wednesday, Feb. 28, at noon. For further information, visit the board of elections website, facebook, or contact the Board of Elections staff at (828)349-2034 or mthibault@maconnc.org.