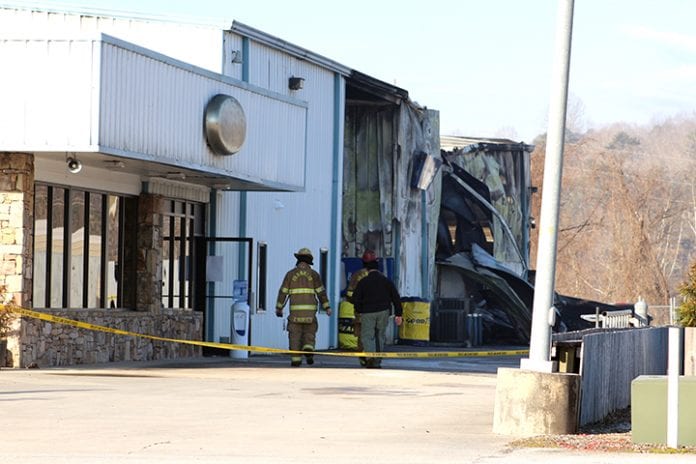 Nine local fire departments and more than 100 firefighters could not quell a raging fire at the Ford Dealership on Sylva Road early Friday morning. The fire was called in to 911 by a motorist who reported seeing billowing smoke from the body shop at 3:37 a.m.

“The fire was fed by a significant fuel load, and was heavily involved by our initial arrival,” said Franklin Fire & Rescue Chief Matt Breedlove, whose nine fighters at first entered the parts department, where it appeared the fire started and was quickly consuming highly flammable materials such as tires, liquids and vehicle parts, making the structure unsafe.

“The fire was too intense, an evacuation was given, and we moved to a defensive mode and continued to attack the fire from outside the building,” he said. Chief Breedlove called for back-up from Macon, Rabun and Jackson counties, who provided additional manpower and water tankers.

Cullasaja and Mountain Valley fire departments were among the first on scene. Otto Fire and Rescue was called to provide a mobile cascade air system so that firefighters’ air tanks could be recharged on site. No firefighters or civilians were injured battling the blaze.

With temperatures hovering in the teens, excess water used to mollify the fire froze on nearby roadways, leading the North Carolina Department of Transportation to dump five tons of salt to prevent icing.

Breedlove said the fire took nearly four-and-a-half hours to contain and the parts department and body shop section of the structure was considered a complete loss, while smoke that passed through a breezeway damaged the showroom and sales offices.

“The fire damaged the dealership, the facility,” said co-owner Bryan Rauers. “We will rebuild, and we will be back.”

Rauers could not assess the damage firsthand due to the building’s unsafe condition and a police line protecting the site until state investigators arrived Monday.

Franklin Police Chief David Adams, whose officers secured the location until investigators took over, called the business a “staple” in the community, and expressed concern for the large number of employees impacted.

As of Saturday, the sales office was fully open and operating out of the nearby Kubota tractor store. Most of the dealership’s more than 30 employees were told not to report to work, but that they would be compensated.

“While we’re rebuilding, they will be paid,” assured Rauers, whose sales team was delivered a sub platter from Dooley’s Deli Saturday afternoon courtesy of Bob Crawford’s Smoky Mountain Chrysler Dealership.

Crawford said that’s just mountain custom. “To help these guys going through a tough time. It’s a big loss, a tough recovery,” he said. “It’s one thing to be competitors, but it’s just common courtesy – growing up here, that’s the tradition, looking after your neighbors.”

Rauers said there too many local businesses and individuals to name all those who had offered support.

“The outpouring of support from local businesses, dealerships, churches, the prayers that have been extended – we’re just overwhelmed,” he said.

“A lot of commercial structures do have fire alarms and detection systems in place,” said Franklin Fire Chief Breedlove. “We did not receive any alarm activations on this fire.”

Asked if his business had a fire alarm or sprinkler system in place, Rauers said: “I don’t think that’s a valid question.” He added, “Let the fire [department], the SBI [State Bureau of Investigations] and the adjusters worry about all that.”

Macon County Fire Marshal Jimmy Teem said the Ford Dealership did not have a sprinkler system or fire alarm. Teem noted that he had inspected the building in recent years and that a business occupancy classified building of its characteristics was not required to have such systems in place to meet state and county ordinances.

“From everything I have seen, it has met code,” Teem said, noting an investigation of a commercial fire for possible arson was standard protocol.

The North Carolina State Bureau of Investigation took over for the county Monday and gathered evidence throughout the day. A cause for the fire was not immediately determined.

The 911 incident report indicates that flames were reported through the roof, indicating an upper level fire early in the response. Officials did not provide a possible cause of the fire.

Local authorities said state investigations may take months to complete and sometimes not enough evidence is salvaged to identify a cause.

Tip-a-Cop event raises $7,000 for Shop with a Cop program