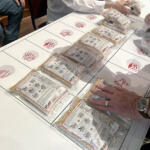 As many as 828 million people across the world do not receive enough nutrition to lead an active, healthy life, or provide for themselves and their families. For communities around the world, facing hunger affects their livelihood.  Without the right nutrients, the brain cannot develop properly, resulting in long term effects of learning abilities. Almost half of all 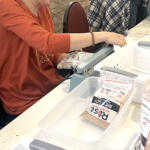 childhood deaths worldwide occur in children with malnutrition. Rise Against Hunger connects passionate volunteers with the communities they serve worldwide.

First United Methodist Church (FUMC) held its 12th annual (taking the year off in 2020) Rise Against Hunger Event last Saturday. Volunteers came together to pack 20,088 meals to send to countries in need. Bags of protein were carefully measured and placed into a funnel attached to 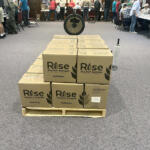 a plastic bag. That bag was moved down the production line where another team member added dried vegetables, rice and a vitamin packet.  A heat sealer insured the ingredients were properly stored for shipment.  Labels were then placed on each bag listing lot number, country of origin and use by date. The food is not seasoned as each country has their own unique ways of seasoning their meals. Completed bags were placed into boxes for shipment.  FUMC volunteers were placed at four tables with a crew of helpers at each table.  With some music for motivation, stylish hairnets and a warm heart, the folks at FUMC were able to package the bags of food in about two hours.

The cost for the more than 20,000 bags of food that FUMC purchased was $8,000. This cost includes the food, equipment to bag the food, and transportation to send the food internationally.  Some of the locations that the food is shipped to are Italy, India, Malaysia, South Africa and the Philippines.

In 2021, Rise Against Hunger impacted 2,720,700 lives; 15,451 metric tons of food was procured; 17 million meals were packaged; 27.3 million meals were distributed; 29 countries were served and 85,300 volunteers were engaged in the project.  Rise Against Hunger is growing a global movement to end hunger by empowering communities, nourishing lives and responding to emergencies. Targeting remote, last-mile communities within hunger pockets often overlooked by global media and other INGOs,(international non-governmental agencies) they work with local leaders to harness the strengths of their communities and tackle their own food and nutrition security challenges with agency, dignity and resilience. Their global impact includes the activation of millions of volunteers, donors and influencers each year through meal packaging, virtual experiences, and digital and social engagement.

Enjoying lunch on the square