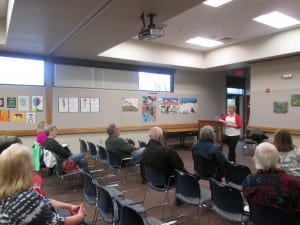 A very interested group joined author Debra Jenkins at the Macon County Public Library on Thursday, April 7, to hear “I’ve Always Wanted to Write a Book – Now What?” Her talk was informative and fun.

“Daydream with me for a moment. Imagine you’re going to pack up and move to California. You know where you are, and where you’re going, but you don’t know what amazing things are going to happen on the way to California. You might stop at the Grand Canyon, you might meet someone at a rest stop, you just don’t know yet,” she said. “This is similar to having an idea for a book but worrying that because you don’t know how you’ll get there you should never leave.”

Jenkins spoke from the heart as a first time novelist who was happy to share her insights. She recommended books such as “Don’t Murder Your Mystery,” “The Emotion Thesaurus” and “Self-Editing for Fiction Writers.”

“I learned that the adverb is not your friend. The –ly words,” because it stops the flow of the description. “Instead of getting hung up on one word or one thought or one scene, this is one of those books (“The Emotion Thesaurus”) I can just open up. Say I’m writing about someone who is jealous. Here’s two pages on envy. What does somebody do if they’re feeling envy? Staring, glowering, mouth turning down, lips parting slightly, flaring nostrils, sweaty hands … kinda neat, it gives you ideas.” She advised the group to watch people and try to think into words what someone is doing to describe what someone is feeling.

Transitions within the story can be challenging.

“I thought I had to start a new chapter every time I had a new scene or character. I had 50 chapters! I learned to use a page break to shift perspective, to start a new scene,” Jenkins continued. A page break can be a large space between paragraphs, a line of symbols or a fresh page.

While she had been worried that she’d never be able to write 50,000 words, a typical length for novels, she ended up with 130,000. She edited and formatted her book and was able to reach out to friends and family for input and editing.

“Because I was self-published, I could order five books at a time, and then ask people to read it and mark it up, find every typo, every word that’s not used how it should be.”

Jenkins provided valuable information about her experience with self-publishing.  She used CreateSpace through Amazon. While they have paid services for all the steps to pull together a book from a manuscript, Jenkins decided to do it herself. She said it was a great experience. She told stories about people spending thousands of dollars to end up having a publishing company only list the book on Amazon, which is a fairly straightforward process. She was happy with her decision.

She used FaceBook ads to promote her book, “In The Midst.” She explained how you can target certain areas on a map or choose anywhere in the world and how it’s possible to limit your advertising costs.

“I set mine at $5 per day, and my ad popped up on someone’s FaceBook page,” she said. Jenkins was surprised that she had readers in England and Australia who had found her book through the ads.

Ultimately, her advice was to start writing and the rest would come.

“I always remember the three R’s: Reserve some time, Remove distractions and Relax.”

Overlook Theatre bringing Tarzan to the stage this weekend