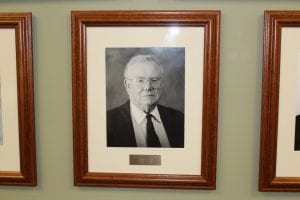 Former Franklin Mayor David Edward (Ed) Henson, known as “Doc” to many, due to his half-century career as a dentist, died Nov. 19 in Asheville. He was 84.

“Doc was one of the best mayors in Franklin, or at least in my opinion,” said current Franklin mayor, Bob Scott. His wife, Nancy, who served for 11 years as the first appointed woman to the Board of Aldermen, said she had the privilege of working with Henson. “There were four different mayors during my service. Ed was someone who saw ahead and liked to get things done. He didn’t just talk about what Franklin needed.”

Henson was born Sept. 20, 1934, in Jackson County. He received his Doctor of Dental Surgery (DDS) from the University of North Carolina, Chapel Hill. Besides serving as mayor of Franklin from 1983 to 1993, from 1995 to 1997, and from 1999 to 2003, he was also involved as a former president of the Cherokee Historical Association.

Remembered Nancy Scott: “Ed was very active in understanding Cherokee’s history and was pleased with Macon County’s ties with the Eastern Band of the Cherokee tribe.”

“He did so much for the town,” said Mayor Scott. “He lived and breathed any and all things affecting Franklin, and he was responsible for seeing so many things through.  For example, the new Town Bridge (named after him), under-grounding electric wires on Main Street, and festivals, which continue today. He was a true visionary and progressive when it came to moving Franklin from a small town to one of the economic leaders in Western North Carolina.  Franklin owes a debt to Doc Henson for all he did as mayor.”

The Scotts point out that Henson was also known statewide.

“He had many connections in Raleigh and with North Carolina state officials, which helped bring benefits to the area,” said Nancy. “He represented Franklin well everywhere he went, which resulted in him having a big impact on Franklin in a positive way.”

Henson was also active in the N.C. League of Municipalities, according to Mayor Scott. And Nancy Scott said he was instrumental in securing the Scottish Tartans Museum as a unique offering in Franklin.

Many considered Henson a “good friend,” said Mayor Scott. Beale, who said he served with Henson on the Macon Bank (now Entegra) board, agreed.

A moment of silence was observed in memory of Henson during the Dec. 3 Franklin Town Council Meeting.

Henson is survived by his wife, Helen Reed Henson; a daughter, Maria Henson Wells; a son, David Edward Henson, Jr.; a brother, Tom Henson; and grandchildren: Cody Wells and Jack Wells. Memorial contributions are to be made to CarePartners Hospice Center in Asheville.

Pickin’ on the Square kicks off new season of entertainment