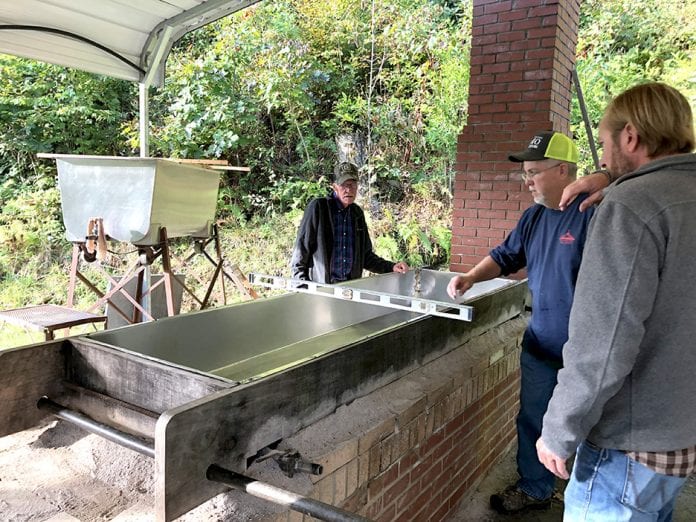 Since many residents of Macon County are either transient or seasonal, centuries-old local traditions are sometimes overlooked. However, if your name happens to be Fouts or Rickman or Tallent – or any combination of these or other original family names – you have known sorghum syrup making from the time you could walk and talk.

September is when the Fouts family and their extended family members, as well as friends and neighbors, gather to harvest sweet sorghum cane and then make syrup. They have been doing so for the last 100 years, with the exception of two interruptions, the 1943 death of then-matriarch Arbazena Leatherman Rickman and World War II. Without fail, the “patch of cane” has been planted and the “run of syrup” has been made in Macon County.

Arguably, family members believe sorghum syrup has been made in the area for even longer, since the settlers first established homesteads in the mid-to-late 1800s. The tradition is so important, in fact, that Fouts family members contributed to the writing and publication of “The Fouts Family Syrup Book,” which includes “a collection of stories, photographs, and recipes” to preserve a way of life that has mostly been lost.

“It was the only sweetener at times,” said Jim Fouts, who lives on the Burningtown Road farm in the Iotla community at which his grandfather, William T., and his father, Marshall, were raised.  “It was then and can be used now to sweeten breads, gingerbread, cookies, cakes … all sorts of things.”

On less than an acre behind the house, this year’s patch of cane was topped, stripped, and harvested Sept. 19. Immediate family and a bevy of cousins showed up mid-morning to help carry 8- to 10-foot cane stalks to the tractor. Next to Jim Fouts’ family home are remnants of the stone steps and foundation where the small family country store once stood. He pointed out that they must have sold homemade sorghum syrup.

All the cousins in attendance at the harvest were in agreement about why they show up every year to help cut and stack the cane: family tradition.

“It’s a glimpse into the past of Macon County,” said Harvey Fouts. “I don’t know of any other family in Macon County growing and harvesting cane and making syrup.”

“We definitely do it for the fun of it and for gathering,” said Jim Fouts.

Wrote William (Bill) Brian Fouts in “The Fouts Family Syrup Book”: “There must be more to it than the few jars of syrup that get passed out when we’re done. Two things come to mind immediately. The first ‘family.’ We in the Fouts family are truly blessed by God to be part of such an amazing family. In today’s society, lasting and strong family ties are rare… the second, well, it’s just plain fun. The whole family manages to pitch in whenever possible to make everything come together …”

Harvey Fouts explained that although many family members still reside on family land and at family farms, individuals who have moved away often return annually in September on harvesting and/or syrup making days.

The book teaches that sorghum is a cereal plant that most likely originated in Africa and was brought over by slaves. Cows love the cane plant’s starchy seeds and the sweet juice. It is the latter that has been the interest of the Fouts family for generations.

Seeds are ordered annually and planted around May 10. Like many other crops, cane requires adequate soil, rain, and fertilizer to grow properly. Plants have to be thinned out to about four inches apart a few times so that the strong stalks have room to grow. Before the stalks are cut, the leaves are stripped and the top seed pod is cut off.

“It was one of our best crops,” said Tommy Fouts during this year’s harvest. “The weather was good, and this year we got rid of aphids. And the way it’s standing straight is an indication.”

The sugar content goal is determined by Degrees Brix. Degrees Brix (symbol °Bx) is the sugar content of an aqueous solution. One degree Brix is 1 gram of sucrose in 100 grams of solution and represents the strength of the solution as percentage by mass. … The °Bx is traditionally used in the wine, sugar, carbonated beverage, fruit juice, maple syrup and honey industries. (Wikipedia)

“If it’s below 12 or 13 percent, it won’t hardly make syrup,” said Jim Fouts. “Should be at least 16 percent. And if we don’t pick it in time, if it gets past maturity, the sugar will turn to starch.”

After the harvest, Jim allowed his cows to enjoy what was left in the cane field so that nothing is wasted.

A few days later, on Saturday, Sept. 21, nearly 75 people gathered throughout the day – starting at 7 a.m. until early evening – to help with and experience the actual sorghum syrup making at the family farm in Cowee where siblings Harvey, Bill, and Katherine Fouts (Booker) have homes. The valley was originally settled by Merritt Rickman in the 1800s, and a 1926-built home, now owned by Katherine, was where she and her four brothers were raised.

Once upon a time, the cane grinding mill was operated in an open field by a mule. Modern times resulted in a gas-powered mill that grinds and presses the cane so that the juice flows through a hose and is gravity-fed into a vat, where it waits until it is ready to flow into the furnace, which is a long brick contraption with a chimney at one end and the furnace opening at the other. An important step is “sealing” the boiler with wood ashes so that the heat stays underneath and can be regulated properly. Then, when the boiler is filled with the juice, it heats up for many hours and the impurities are “skimmed” off of the juice. When the water evaporates, what is left is the syrup. The same wooden paddle, which hangs under the open metal shed, has been used for 100 years to push the resulting syrup into a spigot so mason jars can be filled.

This year, approximately 17 gallons of syrup were made from the harvested cane. It was given away as reward for another year’s job well done.

Part of the annual tradition of syrup-making involves, before meals, the saying the Pledge of Allegiance to the American flag and reciting the Fouts pledge to a created Fouts-family flag. Last Saturday, food was prepared for breakfast, lunch, and dinner. Katherine Fouts Booker is a major contributor to the annual syrup-making meals. Booker maintains a 1950-constructed barn that has been made into a sort of family dining hall/museum on the ground floor. Set tables awaited guests for the noonday and evening meals.

On the walls of the barn are original land deeds dating back to 1836, 1853, and 1879. A prominent family photograph includes her great grandparents, Rowland and Arbazena Rickman and their children. The property’s small granary and the spring/wash house still exist, and rocks were taken from the nearby creek to make the foundation for the current workshop/barn/grandchildren bunkhouse, also a museum of sorts, with tools, equipment, saddles, and more on display. The circa 1926 home, which has been updated somewhat, includes windows salvaged from an old section of Franklin High School, a 1941 organ with the original $12.50 receipt, the battery-operated radio that Booker said was what they gathered around weekly to listen to the Grand Ol’ Opry, and much more to pay homage to the family’s long history in the area.

For the family history book, Booker wrote, “Homemade Memories Sweetened with Syrup.” In it, she recalled the importance of the old way of life, much of which she sees continuing with sorghum syrup-making and other traditions.

“Everything was and is timed just right,” said Booker. “After the syrup was finished making, the women would have the apples ready and they would make apple butter using some of the syrup.

Winter storm forces 13th annual Cold for a Cause to end...