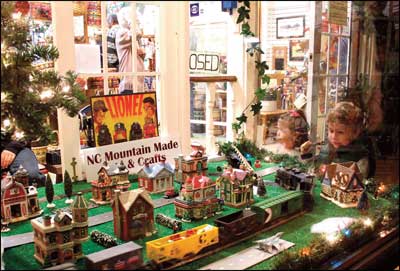 Roaming the streets of Franklin Saturday night, dodging in and out of the thousands of shoppers who flocked downtown, was the Grinch and his accomplice, Little Cindy Lou Who. With a heart three times too small, the Grinch slithered along Main Street all night posing for pictures with adoring fans, when in reality he was planning how to steal Christmas from the boys and girls in Franklin.

When it came time for seven-year-old Rylie Abel to help Santa light the tree for the first time this year, the Grinch had other plans. Tip-toeing around the gazebo, the Grinch attempted to destroy Santa’s plan of bringing Christmas to Main Street.

Lecture offers facts about the Cherokee and Revolutionary War

House proposes Medicaid expansion bill; Senate, Cooper not on board yet