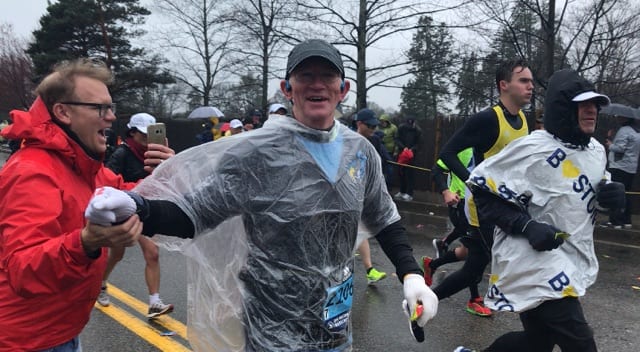 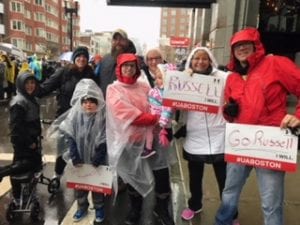 Slogging through a torrential downpour, with temperatures in the 30s and a near-gale gusts that blew the rain into the runners’ faces, Franklin native and local attorney Russell Bowling, 63, was faced with less than ideal conditions for his first-ever Boston Marathon, but despite weather that would have cancelled most other races, Bowling persisted and finished the 26.2 mile race in 4 hours and 15 minutes.

“I didn’t expect the conditions to be as adverse as they were. It made it hard to enjoy all aspects of the race,” said Bowling. “There were fewer spectators and it was nearly impossible to engage with the spectators.”

The Boston Marathon, organized by the Boston Athletic Association, is the world’s oldest marathon. It takes place on the third Monday in April, also known as Patriot’s Day, which is a holiday (in Maine and Massachusetts) that commemorates the famous battles of Lexington and Concord. The race garners around 30,000 runners from across the country each year and to be able to compete, runners must achieve qualifying times in sanctioned events. Bowling was able to improve his race time to be able to register for the next Boston Marathon.

While the rain deterred bystanders from lining the streets to encourage the runners along the way, Bowling’s fan club was strong in Boston, with family and friends braving the weather to cheer Bowling along every step of the way. Back in Franklin, fellow runners and friends followed Bowling by tracking his race only and sending him well wishes throughout the day.

“The most memorable part about running the Boston Marathon is that I had all of my family, including my wife, Rebecca Bowling; my daughter, Julia Jones and her husband, Jeff Jones; my two grandsons, Cooper Jones and Tanner Jones; my daughter, Jessica Eason and her husband, Parker Eason; and my granddaughter, Audrey Eason; my brother, James Bowling; and my friend, Andrea Lawley, who were all there share the experience of this special event in my life with me,” said Bowling.

Bowling’s first marathon was a historical moment for the race, which first started in 1897. For the first time in three decades and for the first time since the race became fully professional in 1986, the first American woman, Desiree Linden, won Boston. The weather was a challenge for some of the world’s best runners, many of whom who didn’t finish the race or finished out of the top spots for their career. The frigid temperatures, high winds, and piercing rain made the marathon even more challenging than the race itself.

“The weather made the Boston Marathon even more challenging than expected,” said 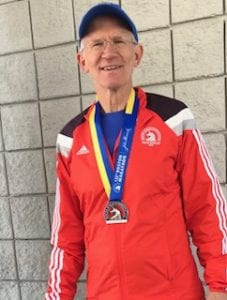 Bowling. “The night before the race I had to check the weather forecast constantly. The morning of the race, I put on five layers of shirts and two rain ponchos. I wore plastic shopping bags around my running shoes to keep them dry until I approached the starting line. However, after I removed the plastic bags, my socks were already wet by the time I started running. During the marathon, it rained the entire 26.2 miles, except for brief intervals. Many times, the downpour seemed torrential. It was a challenge to try and focus and block out the unpleasant weather conditions.”

Although he couldn’t prepare for the weather, Bowling did spend the weeks leading up to the race focusing and training more than the avid runner was already used to.

“Starting four weeks ago, I ran the Astro Marathon on Sunday, March 18, 2018, the Go Tell It on the Mountain 5K in Otto on April 1, 2018, and I also ran the Valley of the Lilies Half-Marathon in Cullowhee on Saturday, April 7, 2018,” said Bowling of how he spent the last few weeks training for the race.”

Several racers weren’t able to finish due to the conditions. Galen Rupp, who placed second in the Boston Marathon last year, was forced to drop out of the race between miles 18 and 19 and was later treated for symptoms of asthma and hypothermia. There were around 100 runners that were transported to local area hospitals during the race and more than 2,500 medical encounters by medical staff. Twenty-five elite athletes were treated, 90 percent of which suffered from hypothermia. Bowling said he was fortunate to have been spared any such ailments and never thought of quitting the race.

“I never thought about not finishing,” he said. “Fortunately, I didn’t have any serious cramping problems or hypothermia. I tried to focus and push through to the end of the race.”

After 26.2 miles and months of preparation, Bowling said the sprint toward the finish line was something he will always remember.