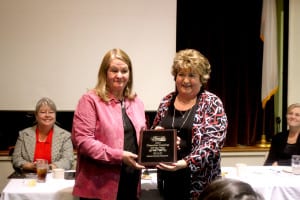 The Franklin Chamber of Commerce celebrated accomplishments from 2015 with an annual award banquet last week held at Tartan Hall.

The Franklin Chamber of Commerce worked to grow membership in 2015 by printing 15,000 copies of a visitor/relocation guide, coordinated the inaugural Mingle on Main networking event downtown, and continued to produce a weekly Chamber E-news for members to stay up to date and informed. The Chamber also installed a new awning and outside lighting in 2015, improving the Chamber’s current facility.
Witha  focus on tourism development, Chamber President Judy Chapman served as chairman of the Franklin/Nantahala Tourism Development Commission and Executive Director Linda Harbuck, served as a non-voting member of the Franklin/Nantahala TDC. Harbuck also travelled to South Florida in 2015 to attend and promote Franklin at the Gem Mining booth at the South Florida Fair.
Continuing to host special events for Macon County, in 2015 the Chamber hosted the 21st annual 4th of July Fun Day and Fireworks celebration, held two Gemborees, one in July and one in October, presented the 7th annual KCBS Mountain High BBQ Festival and Car Show in August and once again hosted the annual Christmas parade.
The Franklin Chamber added 35 new members in 2015 and welcomed and assisted 10,000 visitors to the visitor’s center. Through staff and volunteers, the chamber also performed and publicized 15 ribbon cutting ceremonies with new businesses in Franklin.
After a catered dinner prepared by Chef Connie Grubermann of Oak Hill Country Inn and served by students of the LBJ Job Corps Culinary Arts program, Dr. Steve Morse, WCU Director of Hospitality and Tourism was featured as the banquet’s guest speaker. Dr. Morse highlighted Franklin’s foresight in creating marketing materials such as a video crafted by 99 Hills and the Macon County Economic Development Center. The video combines the beauty of Western North Carolina with the economic offerings and advancements provided in Macon County. Dr. Morse has worked with Macon County Economic Development Director Tommy Jenkins to promote the video around the country and is being used as an example for other towns and counties to follow.
In addition to highlighting dedicated chamber members and local businesses, the Chamber of Commerce put the spotlight on people and programs that go above and beyond to ensure that Franklin and all of Macon County is a great place to live and work.
Awards presented at the banquet were:
– 2015 Chamber Member of the Year – BI-LO
– 2015 Club/Organization of the Year – Holly Spring Community Develpment Club
– 2015 Youth Rising Citizen of the Year – Miranda Williamson
– 2015 Duke Energy Citizenship & Service Award – Dave Linn
– 2015 Citizen of the Year – Alice “AB” Bradley

Grocery chain Food Lion will not confirm takeover of Franklin...