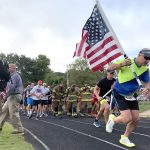 Macon County residents gathered in the Panther Pit Saturday morning to commemorate the 20th anniversary of the September 11 terrorist attack. Franklin Mayor Bob Scott and Macon County Commission Vice-Chair Ronnie Beale opened the 9/11 ceremony with remarks remembering the lives lost and showing appreciation for the first responders who continue to serve the community. 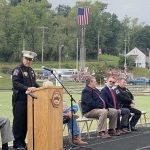 Franklin Police Chief Bill Harrell had the honor of introducing the event’s guest speaker, Retired New York Police Sgt. Pat Howard, who told of his experience on September 11, 2001, when he lost his brother George in the terrorist attack. 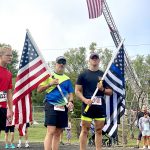 “The unthinkable was now our reality,” Howard said of the realization after watching the second World Trade Center Tower be struck. “America was once again under attack on our home turf. I say again, because in February 1993, there was a bombing at the same World Trade Center. It was a truck bombing that narrowly missed taking down that building.”

George Howard was an officer with the New York/ New Jersey Port Authority Police Department and was at home when the first tower was struck. After receiving a call from his coworkers, George left the safety of his home and went to Ground Zero. George was on the ground when the second tower collapsed. While attempting to escape the rubble, George was struck in the back of the head by a projectile from the World Trade Center as it was falling.

Pat, who relocated to Franklin after being born and raised up North, said that as President George Bush toured the destruction left in New York City after the terrorist attack, he kept close Pat’s brother’s badge, as a way to honor his sacrifice and service.

Pat stated that with the pain and suffering so many have experienced, he looks for inspiration and hope in other places. After moving to Franklin four years ago, Pat said he often finds that inspiration in different areas of the community and the people in Macon County.

Franklin’s new fire chief, Ben Ormond read the timeline of events on September 11, followed by a moment of silence to remember the nearly 3,000 people who lost their lives.

The event was followed by the first annual Never Forget 5K race which raised money for the Franklin Fire Department to help with equipment needs. The race featured 94 runners, with Logan Russo and Hannah Ludwig coming in as the top two overall finishers of the race. To honor the fallen, many of the runners, volunteers at various fire departments in Macon County, ran the race in full turnout gear.

After the race, the public was invited to attend a Public Safety Day hosted by the Franklin Police Department in the Franklin High School parking lot.

Children in crisis in need of advocates in North Carolina