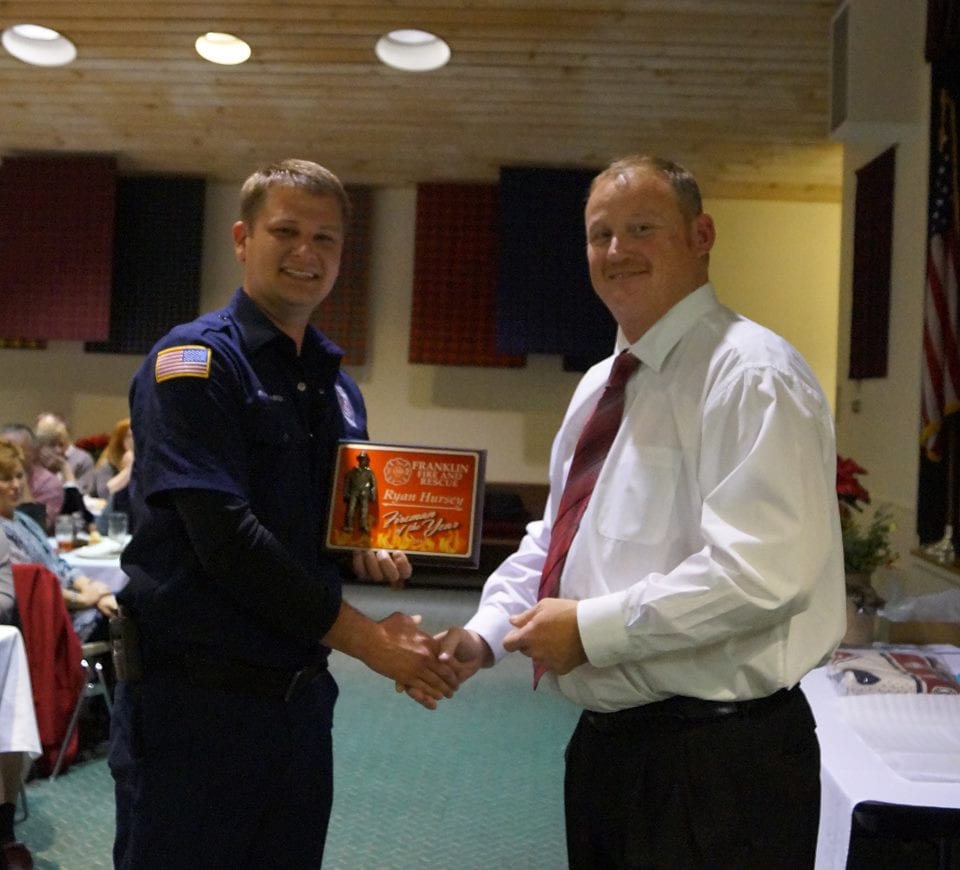 When he was just 15 years old, Ryan Hursey signed up with the Burningtown-Iotla Fire Department Cadet Program. Now, 16 years later, Hursey has built a career with local fire departments and last week was recognized for his efforts by being named Franklin Fire Department’s Firefighter of the Year.

Franklin Fire Chief Kevin Rohrer, who was hired by the town of Franklin in April, noted that the Firefighter of the Year award is significant because it’s voted on by members of the department.

“Firefighter of the Year is voted on by our peers,” said Rohrer. “Each year I ask the department to vote on a member who they think has gone above and beyond the call of duty. This year it was Captain Ryan Hursey. Ryan has been a volunteer since 2006 and has been a career firefighter for two years and is a valuable member. He manages different projects from vehicle maintenance to grant writing. Ryan has put in a lot of hours keeping our apparatus on the road this year. I would have to say the department did a great job this year on voting Captain Ryan Hursey Firefighter of the Year.”

Hursey has served with the Franklin Fire Department since he was 20 years old and signed up as a volunteer. He pulled double duty in public service also serving as a paramedic with Macon County Emergency Service.

“As a young kid I looked up to people working in emergency services,” said Hursey. “I thought of them as heroes. When the position arose to become a career firefighter with the Franklin Fire Department, I found it to be a good opportunity to be able to serve my hometown community.”

In 2012, Hursey was serving in Gwinnett County, Georgia, Fire and Emergency Services Department as a Firemedic, but when presented with the opportunity to return home, he jumped at the chance.

“Ryan is a very talented young man and the town of Franklin was very fortunate to have recruited him from a large career fire department where I believe he would have ultimately had a very successful career filled with many opportunities,” said Former Franklin Fire Chief Warren Cabe. Cabe served as Hursey’s Chief at Franklin Fire Department for four years and worked with him when he served as a paramedic as well. “I am sure he will be very successful in the years ahead and he is a perfect example of the type of people needed to guide public safety into the future.”

Hursey noted that in his line of work, the hardest part of what he does everyday is responding to emergency calls involving children. There isn’t any way to prepare for those encounters and more than just being a firefighter, those calls require you to be empathetic, a friend, someone to offer hope in a time of tragedy.

With 16 years of experience with local fire departments, Hursey not only serves as a career firefighter for the Franklin Fire Department, but on his days off he works with the Cullasaja Gorge Fire Department and played an instrumental part in the recent inspections that lowered the department’s fire ratings.

“I have known Ryan a long time and he is a great guy and excellent firefighter,” said Paul Corbin, Cullasaja fire chief. “Whenever we need something or when one of our guys are off, Ryan always steps up to help us out.”

Working with several departments and fostering a dedication to firefighting, Hursey said that he has been fortunate to grow up with tremendous mentors throughout his career that have helped to shape him and build him into the firefighter he is today.

Hursey has responded to countless calls over the last 16 years and in all the tragedy, he said that the most rewarding part of his job is being the good in someone’s day.

“The most rewarding part of the job is knowing that when someone is having the worst day of their life, they can call on my team and myself to save lives or protect their property and make a difference,” said Hursey.