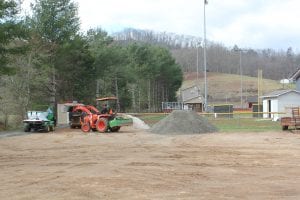 Since taking the reins of the Booster Club in November, Tom Westbrook, more commonly known as Coach, has hit the ground running with a long list of projects and program needs he has set out to address. As soccer season kicked off, Coach Westbrook made it possible for the Booster Club to providing $4,000 in funding for a new storage building at Macon Middle School for use by the middle and high school soccer teams.

“Six soccer teams were basically keeping all of their equipment in a closet and it was hard on those teams,” said Coach Westbrook. “So we purchased a new building just for the soccer team for all of the things they need to be successful.”

At the end of the day, Westbrook said that is what drives him and what led him to take over as president when asked. “It comes down to the kids,” he said. “I spent 46 years as a coach and I have seen the needs of different teams and what the athletes have to do just to be able to take the field. The Booster Club is a way to help those athletes and the coaches do what they do best. We are here to give them the tools they need to be successful.”

On a recent Friday morning, just before lunch, Coach Westbrook was at the middle school softball field helping a group of parents finish a fresh coat of paint on the dugout and the concession stands during a break in the rain. A parent told Westbrook they needed some additional supplies to get the job done and Westbrook offered to pay it out of his own pocket just to keep the work going before the next round of showers hit.

Coach Westbrook isn’t from Franklin, and said that a lot of people in the community may not know him beyond seeing him on the sidelines during Franklin football games in the fall or on the track during track meets. But that is something he is working to change. “You just have to get out and meet people,” he said. “When you sit down with someone face to face, tell them what you need and how they can help accomplish that, great things can be done, and really, that’s all I am doing.”

In the first three months, Coach Westbrook continued to build on the work already completed by the Booster Club and started to work on new member retention, growing the Booster Club from six members to 40. He worked out deals with Pizza Hut and Chick-Fil-A to provide food at concession stands for the different sports at the middle school and the high school and turn a profit for athletic teams.

While the Booster Club does generate some revenue on concession stand sales, the bulk of their monies comes from the sale of on-the-fence signs at various athletic fields.

“My goal is to line the outfield of the softball field with 20 signs,” he said. “The first year you have the expense of the signs, but then after that, what those businesses pay to keep their sign up is all profit that goes to our student athletes.”

Another big move Coach Westbrook prioritized was providing the Franklin High School Band with a steady revenue stream in the “away” side concessions at home football games. Rather than provide the band with a portion of the sales if band parents run the concession stand, Westbrook offered the concession management to the band so they will have a revenue source throughout the year to meet the needs of their growing program.

For the entire year, Westbrook has outlined goals he hopes to accomplish from continuing to grow the Booster Club’s membership, to ways to fundraise and help the 32 teams at the middle school and high school that the club is designed to support. He may have only taken the club’s top spot three months ago, but he has hit the ground running and is determined to do all he can to help athletes in Franklin.

State approves funds to raise bus driver pay across the board

South Macon has 99 problems and space is every single one...