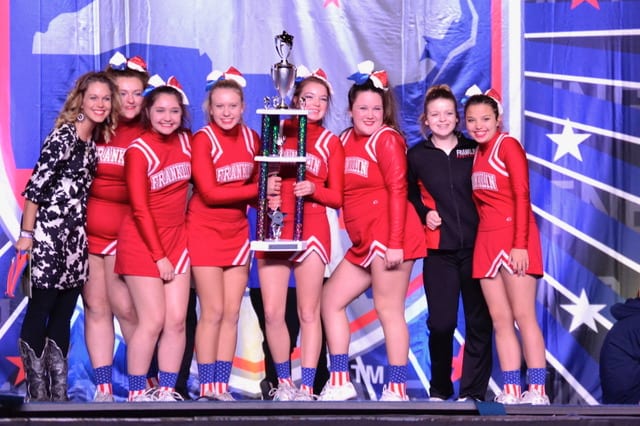 Franklin High School cheerleaders spent the first weekend in December in Raleigh for the North Carolina High School Athletic Association’s State Cheerleading Championship. The six member JV squad competed against four other teams in the Junior Varsity non-tumble D2 Division and walked away with the State Championship. The squad’s routine was complete with a Patriotic theme, and the girls wore American flag socks and red/white/blue bows.

“Oh my, I was in tears – tears of joy,” said Lynn Baker, JV Cheer Coach.  “These ladies have worked so hard, overcome adversity that would have broken down most anyone else, and showed everyone how awesome they are.  They competed against teams that were as much as three times their size in terms of team members.  This win was spectacular and a huge achievement.”

While the JV squad has six team members and one manager, the squad was down one member due to an injury, but was still able to persevere and come out on top.

“The JV Cheer Team has worked extremely hard preparing for the competition,” said Franklin High school Athletic Director Jay Brooks. Brooks made the trip down East to watch both the JV and Varsity cheer teams compete. “They had an awesome routine on Saturday.  We are very blessed to have the cheer program that we have at FHS.  I am very proud of both teams.”

The JV Squad have worked diligently to earn the top state spot, which opened up the chance for the team to compete at Nationals later this year at Disney.

“We had our choreography clinic, where we learn the bones of our materials, in mid-August,” said Baker of when the work began. “We work on learning new and progressive skills throughout the season and put them into the routine as we master them. This year we had to change the entire routine, that was designed for six, to make it work for five. This included changing all our stunts and formations last minute.”

After learning the choreography in August, the squad spent everyday over the next few months preparing for a chance at state.

“Much like any other sport, we train and condition daily,” said Baker. “Cheerleading requires a great amount of physical preparedness and being in tip-top shape is very important. We run drills, review material and work out every day to prepare. We have incorporated a training program into our conditioning that is similar to the cardio endurance that Crossfit programs use. It has been a lot of fun for the ladies and very successful in physically preparing them to go full out for two minutes and 30 seconds on the mat.”

Learning how to balance school, as well as the squad’s responsibilities to other FHS sports teams was a hard learned lesson, but the JV Squad made it look easy.

“We also cheer at football, volleyball and basketball games, as well as completing many hours of community service, all while also preparing to compete,” said Baker. “We have to prepare materials for each game and ensure that we keep up with the traditional aspects of cheerleading – leading the crowd and creating a great game atmosphere.  The team practiced at least three days per week and cheers at all their ballgames as well.”

Th JV team isn’t done yet; they have their sights set on another state title before competing nationally.

“We will compete at the North Carolina Cheer Coaches Association State Championships in February,” said Baker. “These ladies have earned two bids to the 2018 CANAM  Nationals at Myrtle Beach that takes place in March and we plan to compete there.  We learned late Monday night they have also earned a bid to the 2018 UCA High School Nationals that takes place at Walt Disney World. This is a true honor and to my knowledge something a JV team from Franklin has not received prior to this team.”

Despite the team’s small numbers, Baker couldn’t be more proud of their season thus far.

“At the beginning of this season these ladies established a covenant for themselves – RIC.  RIC stands for Role Models displaying Integrity and Character through all actions,” said Baker. “Being a small team, most people tend to not give you much credit or acknowledge you… but these ladies have worked hard, held strong to the covenant they established for themselves and not let anyone allow them to drop below their standards. There are not enough words to describe how proud of this team I am, or how honored I am to be their coach.”

The JV squad isn’t the only cheer team moving mountains at Franklin High School this year. The Varsity Cheer squad competed in Raleigh at state and will be headed to nationals as well. Franklin High School Varsity Coach Taylor Rogers said despite not placing in the top three teams, she is still proud of her 13 member squad.

“Due to a two point deduction-  the team dropped from 2nd place to 5th place,” said Rogers. “Although, we might not have agreed with the deduction, I couldn’t not be more proud of my team. They worked hard, hit their routine and they had a blast. I cannot ask for anything more from them. We never lose, we learn.”

FHS’s Varsity squad competed in the small varsity, non-tumble D2 Division against 13 other teams and have been working since August on their routine.

“The girls practice 2.5 hours, three days a week,” said Rogers. “We went to the Pre-State regional competition in October to get feedback from the judges to be able to make changes to prepare us for our future competitions. We received bids for nationals at both of the competitions we have competed at.”

The varsity will also be competing in the NCCCA in February as well as nationals.

“This is a great group of young athletes and I’m very blessed to be able to be their coach,” said Rogers. “They’ve done amazing things this year. each of them have such great hearts and goals for their lives. I’m proud of them all.”

Franklin High School Spirit Coordinator Jennifer Turner- Lynn said that she is proud of both teams and how far they have come this year.

“All year long we have been practicing the concept of embracing fearlessness,” said Turner-Lynn. “What I saw on the floor at State was fearlessness personified. For Varsity, the best is yet to come. They didn’t lose, they learned some important lessons that they can apply moving forward into the NCCCA State Championships and Nationals. With great success comes great opportunities of growth.”

Martin Truex Jr. asserts himself with convincing victory at...

Kyle Busch charges from the back at Pocono for sixth win