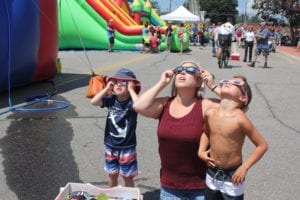 Ten of thousands of people flocked into Macon County over the weekend to experience the Great American Eclipse. While experts and algorithms predicted an influx of visitors anywhere from 10,000 to 100,000, the truth lay somewhere in the middle, with one certainty standing true, the solar eclipse was truly an unforgettable experience.

Visitors from all over the country began to make their way to Macon County last week, with the bulk of visitors arriving late Sunday night or early Monday morning. The roads stayed clear leading up to the eclipse, with minimal traffic delays. Both the Franklin Police Department and Macon County Sheriff’s Office ramped up patrols on the roads, on bicycles, on foot and in the air in Macon County.

“Our biggest concern was for the number of people viewing the eclipse from remote areas and limiting access to those areas due to vehicular traffic or parked vehicles,” said Warren 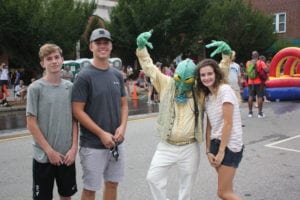 Cabe, director of Emergency Services for Macon County “We actually had very few problems. There was considerable traffic congestion especially on the major highways exiting Macon County but our problems were very minimal.”

Town officials estimated that 10,000 people descended on Main Street for the town-sponsored Eclipse Block Party. The town gave away a steady stream of eclipse glasses, with some still available by the time the eclipse started. Inflatables filled Iotla Street and Lazy Hiker Brewing Company set up a beer garden and yard games on the north end of the street.

“We spent several months in meetings discussing the ‘what if’s’ preparing for this with Macon County Emergency Management,” said Sheriff Robert Holland. “I feel that everything went extremely well.  A majority of our officers worked long hours starting on Friday.   Our Mobile Command Center was set up Monday at the old Walmart/Ingles location.  From there we assigned deputies to various zones throughout the county which included Nantahala, Scaly Mountain, Highlands and at the request of their police chiefs both the towns of Highlands and Franklin. We knew there was the possibility of traffic issues on 441 North and South due to visitors exiting at the conclusion of all festivities.  From the location of the old Walmart, deputies were able to get to various areas of the county without having to get on the 441 bypass if it locked down.  As we all know 441 North did gridlock.  Our officers were still able to respond to calls by taking alternative routes via Highlands Road as well as Holly Springs.   We had an airplane available to us piloted by one of our deputies who is a certified pilot.  Deputy Cody Mitchell was able to take to the sky multiple times and give us some real time feedback as to the road conditions and hazards ahead of responding deputies.  By air our deputy was able to confirm that at one time Hwy 441 North traffic was backed up from I-26 in Asheville all the way to the 441 South exit in Franklin.   He was also able to assist officers on the ground in locating a suspect and a stolen vehicle.  As far as the eclipse… I am very glad we all had an opportunity to witness such a spectacular event and share our beautiful county with so many visitors… but I’m glad that it is over and I’m proud how all the various agencies and employees handled every situation they encountered.  True professionals and our community should be very proud.” 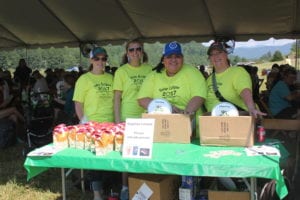 Entegra Bank invited the public to their corporate headquarters and not only treated visitors with a spectacular viewing area for the big event, but had popcorn, drinks, and eclipse souvenirs for free.

Franklin’s Chamber of Commerce sold hot dog lunches and continued to sell eclipse glasses and souvenirs leading up to the event. The vacant parking lot at Holly Springs Plaza was flooded with eclipse viewers with tents for shade and telescopes for optimal viewing. A couple from England set up shop between he parking lot and the Chamber, utilizing the air condition cover of the chamber and the open field with a view of an eclipse they had chased all the way across the pond.

The Smoky Mountain Center for the Performing Arts had a DJ spinning tunes leading up to a free performance by Summer Brooke and the Mountain Faith Band on an outdoor stage. Inside the theater, visitors could purchase snacks and souvenirs or view the progress of the eclipse for free on the big screen.

Founders Park in Highlands was packed with visitors, offering a chance to watch the eclipse a little closer on the plateau’s 4,119 feet.

The U.S. Forest Service had its hands full throughout the weekend, according to District Ranger Mike Wilkins. While the focus was on keeping roads cleared for emergency traffic, Wilkins said a car count gave officials an idea of just how many people packed into the national forest for viewing. Wah Bald had 255 cars stuffed at the top from just below the portal sign up. The Wayah gap area on state road 1310 had 243 cars parked east to west. Cars parked all the way down to our Crawford Cove Road. Whiteside Mountain had more than 180 cars parked along the state road in addition to the parking lot. Albert Mountain had more than 150 cars parked along the road from the end of the road accessing the Appalachian Trail down. Rock Gap to the backcountry bulletin board had 100-plus cars; Hurricane Primitive Camp had every square inch of the field covered with camping units; Pickens Nose area along FS Road 67 had 100-plus cars; and Tellico Gap had long lines of cars east and west of the Appalachian Trail head. 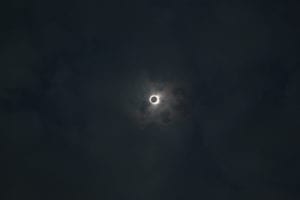 Falls and Whiteside Mountain,” said Wilkins.”The rest of our employees were out trying to facilitate folks having a good time and keeping the roads open at the pinch points, trail heads..etc.”

One of the busier places in the county was the Macon County Airport, which saw their busiest days on record.

“It was absolutely the busiest we have ever been in the history of this airport,” said Marc Bryson.” We had planes trying to land just before the eclipse and had to turn some away because we were just out of space.”

Bryson said Macon County Airport routinely houses 25-30 airplanes, but with planes coming in last week, the airport was beyond capacity with 60-70 aircrafts around the airport.

“We have started seeing larger jets use the airport regularly, but for the eclipse, we had two or three larger jets land that were too large for our equipment to move,” said Bryson.

Bryson said the airport was still bustling on Tuesday morning, as several visitors were just departing. He said planes landed from just about every state on the East Coast, from New York to Florida to Kansas and their passengers were traveling to events in Franklin to Highlands, and down to Georgia. At one point, Enterprise Rent-A-Car had 50 cars lined up at the airport waiting to pick up passengers. That doesn’t even county the 75-100 individuals who landed and watched the eclipse from the airport.

“I just want to personally thank the airport staff for all of their hard work,” said Bryson. “I am so grateful for them and of how well everything went.” 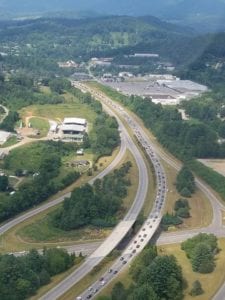 While the influx of visitors trickled in over several days, leading some to believe the estimated crowds weren’t as large as predicted, the hordes of people were manifested Monday just after the eclipse when U.S. 441 was virtually at a standstill in all of Western North Carolina. Motorists reported that it took two hours to travel through traffic just to get from Franklin to Sylva and those who had to continue to Asheville, said it took upwards of five hours to make the trip that would usually take just over an hour.

A trio from down in the eastern part of the state, Cindy Edwards, Terry Vader, and Sarah Neal, avoided the traffic and stayed in Franklin until Tuesday afternoon. The trio rented a house off of Parker Farm Road and enjoyed the eclipse from their deck. They arrived into town on Sunday and spent Tuesday venturing around downtown Franklin. They said they selected Franklin to view the eclipse over other destinations close to them because of the cooler mountain weather.