Four of the town of Franklin’s five council members voted Monday night to appoint Dinah Mashburn to fill the seat left vacant when Billy Mashburn, Dinah’s husband, passed away in November. Billy was first appointed to serve the town of Franklin in 1992 and ran successful re-election campaigns in 1993, 1997, 2001, 2005, 2009, and 2013.

Billy was up for reelection again in November 2017 but passed away from a three-year battle with cancer before the election was finalized. Voters who cast early ballots in the election, voted for Billy while he was still alive. Billy passed away on Nov. 1, days before Election Day. Despite his passing, Billy was still a top vote getter and would have been elected to office.

State statute dictates that in the event of a death, the town council is responsible for appointing a replacement. On a motion made by council member Joe Collins and seconded by Barbara McRae, Billy’s wife Dinah, who has been an active community member in both the town and county, was selected to fill Billy’s seat. The motion passed 4-1 with council member Adam Kimsey voting against Dinah’s appointment. Kimsey made a separate motion to appoint Angela Moore, who had run unsuccessfully for town office for the last several years. The motion did not receive a second by any of the council members, therefore that motion failed.

“I am very honored, but it’s also bittersweet,” said Dinah. “I am a Franklin native, and I love the town. I have always had the best interest of the town at heart, and I am very honored to be selected to fill the seat.”

“I always want to see Franklin flourish,” she added. “I am very excited to serve; although Billy and I did not see everything quite the same, I feel that I am well qualified since he won the seat to follow through with the things he believed in.”

Dinah will serve two years of Billy’s four-year term. During the next town election, scheduled for November 2019, Dinah can run for reelection at that point if she wishes. 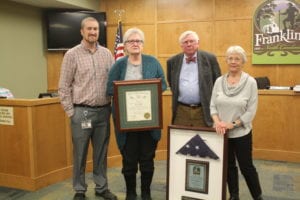 Franklin’s Town Council also honored Billy’s memory for his years of service and dedication to the town of Franklin. Franklin Mayor Bob Scott presented Dinah with a shadow box of a flag that had flown over town hall, Billy’s name plaque, and a declaration highlighting Billy’s service to Franklin. Council member Barbara McRae presented Dinah with a framed copy of the Order of the Long Leaf Pine, the highest honor a civilian can receive in North Carolina.

The recognition came from the office of North Carolina Governor Roy Cooper.  Since 1963, North Carolina’s governors have reserved their highest honor, The Order of the Long Leaf Pine award, for persons who have made significant contributions to the state and their communities through their exemplary service and exceptional accomplishments.

Near the end of the council meeting, Dinah Mashburn was sworn in and will assume her seat at the next board meeting Feb. 5.