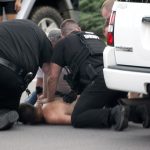 While attempting to address a public disturbance, Franklin Police Chief Bill Harrell found himself in a violent altercation Friday, June 11, near Macon Plaza off Highlands Road.

According to Harrell, based on his 27-plus years of experience in law enforcement, he observed a male without a shirt displaying traits conducive to being under the influence.

“He was flailing around and approaching some passing motorists, including those attempting to enter the Plaza parking lot,” said Harrell. “When I saw this, I activated my emergency lights to draw his attention away from others.”

After turning on his emergency lights, Harrell said he observed the male, later identified as 25-year-old Jesse Machuca, become increasingly agitated. Harrell exited his vehicle in an attempt to calm the individual down, at which point Machuca,  who is six feet tall and weighs 250 lbs., rushed Harrell who is 5’8’’, 200 lbs., and was able to overpower him, gaining control of Harrell’s police vehicle.

“As we struggled for possession of my vehicle, to which he gained entry, I engaged the emergency brake while he was trying to drive away and we then continued to struggle,” said Harrell.

According to Harrell, at that point, the actions of citizens nearby were directly responsible for preventing the incident from escalating further.

“This could have ended much worse if he had gotten control of the vehicle, but because of the fast thinking and actions taken by citizens and law enforcement together, this was prevented,” said Harrell. “Thank you to all those who acted selflessly, placing the safety of others above their own, and to those who have reached out to check on everyone involved.”

Citizens who witnessed Harrell struggling with Machuca acted quickly to aid Harrell in subduing Machuca until additional officers from the Franklin Police Department and the Macon County Sheriff’s Office arrived on scene.

“Several brave citizens that will be recognized at the appropriate time and place, stepped up and assisted until more officers from FPD and MCSO arrived,” said Harrell.

Discover Church teaming up with The Serving Spoon for free community...