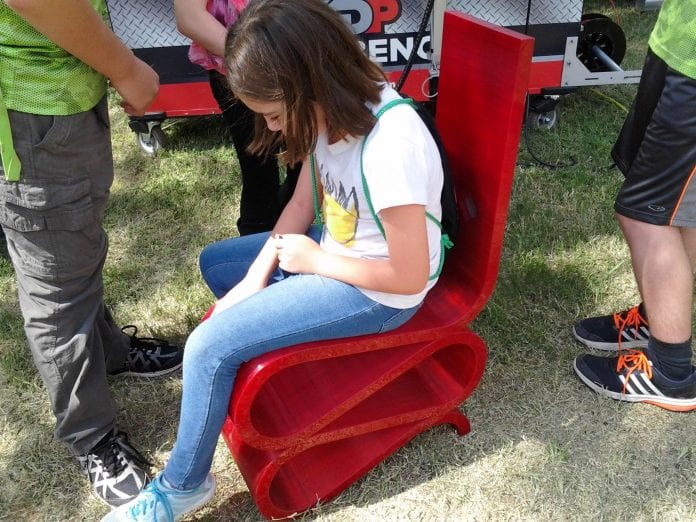 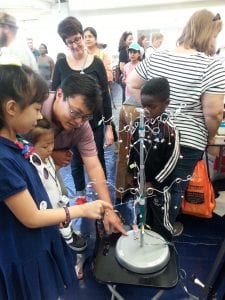 The Atlanta Maker Faire was held in Decatur Oct. 1 and 2. The Maker Faire has been called “the Greatest Show (& Tell) on Earth” and is a gathering of fascinating, curious people who enjoy learning and who love sharing what they can do. From engineers to artists to scientists to crafters, Maker Faire is a venue for these “makers” to show hobbies, experiments, and projects.

Much like a country fair, a variety of booths with a range of visions was spread out along several parks and the high school football field. Products of creative imaginations were on display such as a red chair made by a 3-D printer, a sailboat and canoe sealed with Tyvek instead of fiberglass, and robots, along with makers of bee boxes, gongs, video games, and drone racers.

A drone racer course was set up in a park with curves to follow, flags to pass, a small 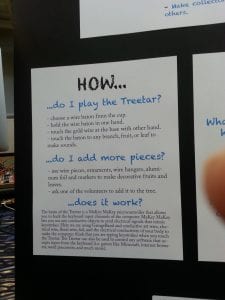 square to maneuver through, and a tent with netting to fly underneath. The quad copters started out the races speeding along, competing against other racers and the clock. The heats soon became races of attrition. Trees around the perimeter that were shading spectators became obstacles for the drones that were flying at speeds up to 60 miles per hour. Often only one drone would finish the heat. The crowd seemed to enjoy both the races and the crashes.

More races could be seen in the area that held the Power Wheels racetrack. Most people are familiar with power wheels; those kid-sized electric cars that are often themed like Barbie or a super hero. They don’t go very fast – usually. The pit crews in these races were allowed to spend $500 to soup up their cars. On a long straightaway, these modified cars could reach speeds of 25 mph. On the slalom track, the top speed was probably about 10 mph. 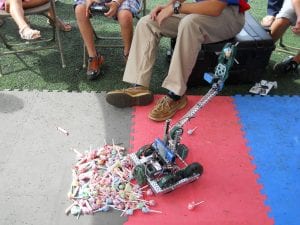 The Innovation Playground was for kids of all ages, but the younger ones especially enjoyed it. The center of the room held what were essentially kid-sized Lincoln Logs made of foam for kids to design and remake a fun play space. There were innovative musical instruments like the Treetar, Lego cars to crash on a track, a large Lego bridge with a working conveyor belt, and information about camps, schools and programs for kids in Atlanta. Kids were able to use their innate curiosity in a variety of ways.

One of the presenters at the fair was Geekspace Gwinnett (GG). The organization was 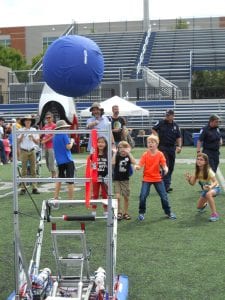 founded four years ago and has become a collaborative space for makers, with a large facility, equipment to share, classes to take, and open houses.

Inspired by Geekspace Gwinnett, a Macon Makers, a club for those who want to create is in the making. The first meeting will be held at The Rathskeller, at 5:30 on Tuesday, Oct. 18. Come with your robots, costumes, electronic creations, etc. and input and help create a makers space in Franklin.

Board votes to lease armory to SCC; construct burn building at...