Gosia Babcock has been living in the United States since she was 10 years old. But even after 58 years, she still maintains deep family, emotional, and patriotic ties to her native Poland. Most of her mother’s side of her family, in fact, is still in Poland. So when on Feb. 24, Russia invaded neighboring Ukraine, she was concerned for Poland, which borders Ukraine to the west.

As the bombings escalated and Russian troops began targeting Ukrainian civilians, many crossed borders into other Eastern European countries. As of April 10, 2.6 million Ukrainians refugees were in Poland.

Babcock began hearing from family members, including her cousin, Piotr Scherfenberg and his wife, also named Gosia, who lives in Jarocin, which is about 1,000 miles from the Ukrainian border. (Recent reports, including an April 9 article in WORLD magazine, indicate that refugees are having to travel farther into the country in order to find shelter and assistance. “… with Polish churches full to bursting and Polish social infrastructure strained, the reality is that people will have to keep moving.”) Babcock’s cousin and his wife tearfully relayed to her the desperation, fear, and needs of the mostly women, children, and elderly that were flooding into their communities.

“My cousin has gone through his own closet to supply refugees with clothing,” said Babcock, who has lived in Franklin for 11 years and is a part-time hair stylist at Sophisticuts on Depot Street in Franklin. “With tears, he has told me stories. It’s just terrible what the Polish people are seeing in the Ukrainians who come there.”

The Scherfenbergs found themselves assisting at least 300 refugees housed in a nearby donated apartment building. In fact, homes, businesses, churches, and other structures all over Poland have been transformed into shelters for refugees. Providing food, clothing, toiletries, laundry detergent, and other essentials has eroded the Polish people’s resources, so they have turned to the generosity of people in other countries. That is why Babcock decided to step up and “help from afar.”

Babcock, who visited her home country two years ago and credits the people with “compassion,” began last month to spread the word that she would be collecting funds to send to her cousin so he could purchase food and needed items for refugees.

“I’ve raised close to $7,000 so far,” she said. “One hundred percent is used for what the refugees need. I have sent over money every week or two through Western Union, as it is raised. It’s my pleasure to help. I want to do something for these people, who are neighbors to Poland.”

Babcock said she will collect monetary donations for as long as they are needed to help refugees. “The community has been generous, but they need to know this is not a one-time problem. These people have to be fed, and my cousin and his wife are doing what they can to help them. The government of Poland is not helping all the refugees yet. The problem is overwhelming for the country. I would like for some churches here to help if they can … helping Ukrainians will depend on the generosity of many.”

She accepts monetary donations, cash or checks made out to her – which she deposits and then sends through Western Union – at Sophisticuts, either in person or by mail to the hair salon. At the salon, she is also displaying collages of photographs of the refugees “so that donors can see the people they are helping care for.”

Already, a few letters of gratitude have been interpreted and sent to her via email.

“I am just the ‘middle man.’ But my heart breaks for what is going on. And these letters …” 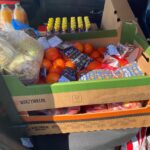 One she shared reads: “Hello. My name is Olga. I’m from Ukraine. I want to tell you thank you very much for your help for us. For everything to eat; for the detergents.” Another conveyed, “The things and food brought by your cousin and his wife are a great support and help for us.”

Babcock acknowledged that people globally have been moved by the classic good versus evil plotline of the unprovoked attack. She pointed out that while it might be difficult to imagine such a scenario happening in modern America, how our own mettle might be tested if bombs exploded around us, if we had to flee homes with our children and pets, or if we had to wonder how we might find food and shelter, the reality of such stresses was what she remembered growing up with.

“My father and his friends would get together, have a drink, and talk about World War II. I definitely feel that that history has had an effect on the Polish people … on their compassion and willingness to help, because of the invasion of Poland by Nazi Germany [1939],” she shared.

“If Putin wins, Poland could be next. Poland is right next door. I love Poland. I appreciate the country and it was a wonderful experience to visit there a few years ago. But it’s pretty scary what’s happening. I’m very afraid of a war. But the biggest thing we can do right now is to help. The Polish people have always been friends with Ukrainians; some have married one another. There are friends and relatives living in several of the Eastern European countries.”

Although Babcock and many other people are hoping and praying the war ends soon, the reality is that many Ukrainian refugees may be in Poland and surrounding countries for a long time. “Some of them have nothing to go back to right now. Their homes and business and lives have been destroyed. The children are already being enrolled in Polish schools, and we will have to figure out how to help them until they can go back.”

She concluded, “I’m very proud of what the Polish people are doing to help. And I’m very thankful for how the Franklin community is helping with that effort.”

Law says residency not required to represent a particular district