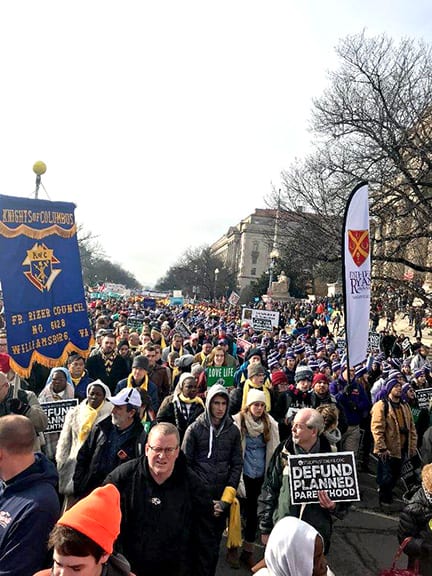 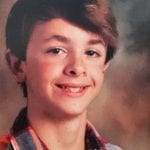 When Julie Tastinger marched with thousands of other pro-life supporters on a bright, cold afternoon in Washington, D.C. this January 18, she could not hold the hand of her adopted son, Shane.

On this, her 10th March for Life, Tastinger, 41, didn’t just march for her faith and her convictions, this year Tastinger decided she would march in memory of her son, who was killed tragically in a traffic accident in May 2017 at age 13. To commemorate what she called a pilgrimage, she posted on social media using the hashtag #becauseofshane.

Tastinger is the Respect for Life coordinator at St. Francis Catholic Church. She still recalls the dinner at her home a decade ago with Father Matthew Kauth. Her mother had recently died of cancer and Tastinger was searching for purpose. Father Kauth asked her if she could lead the group to Washington. 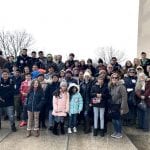 “In a way he felt like that was something that I would be good at,” she said. She took on the task and every year has taken a group of mostly youths aboard the Cherokee Boys Club bus with “good ole’ Bob” as driver for the 10 to 14-hour drive to the nation’s capital.

For an estimated cost of $200 each to cover transportation and lodging, the group stays at a hotel in Arlington and by 8 a.m. the following morning, the about 50 Catholics and Christians of different denominations, including youth groups from St. Francis Church in Franklin and St. John’s Catholic Church in Waynesville, attend an 11:30 a.m. mass at the Basilica of the National Shrine of the Immaculate Conception Friday morning before the march begins.

Good ole’ Bob then drops the group off as close to the start of the march at the National Mall as possible, they find a place in the crowd and walk the mile or so up Constitution Avenue toward the steps of the Supreme Court, finishing some time in mid-afternoon.

People as far as you can see 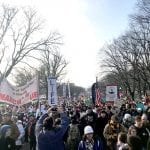 When encouraging young people to join the trip, Tastinger often talks about the impressive size of the march, where several hundred thousand attended the annual march that has taken place each year since 1973 on the anniversary of the Roe vs. Wade Supreme Court decision that made abortion legal.

“The first year I went, I was just so excited. I call it ‘the sea of people,’” she said, noting that she tells her group to make sure they turn around and look back when they reach the top of Constitution Avenue to take in the vast number of people participating in the March. “It’s just people as far as you can see.”

Her group also take in the monuments Friday afternoon after the March disperses, and breathe in the grandeur of the marble pillars, stone statues of America’s historic leaders and the vast open space of the National Mall.

“I like to see their reactions,” she said of the joy of bringing youth to the event.

Tastinger’s annual trip to the March for Life was inspired by her Baptist mother, who instilled in her a deep respect for life, and taught her that life begins at conception. Tastinger believes the science is clear on the subject, and Catholicism’s mortal sin for murder applies to abortion, no matter at what stage the pregnancy is terminated. 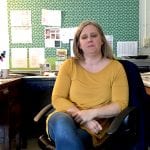 “For us this is definitely a civil rights issue for unborn humans and to speak for them because they truly have no voice,” she said. Nonetheless, Tastinger said she has many pro-choice friends, and she refrains from lecturing them about her beliefs, but welcomes respectful conversation.

The Franklin High School teacher considers herself an independent and used to compile a list of pro-life candidates before each election to hand out to friends. She said she never labeled candidates with their party affiliations, and often found that local candidates from both parties shared her stance on abortion.

Her reason for attending the March for Life is to voice opposition to the Supreme Court decision and call for it to be overturned. She believes the steps President Donald Trump has taken in the past two years by appointing more pro-life federal judges across the country may eventually lead to a Supreme Court overturning of Roe vs. Wade.

Tastinger was glad to know that Pres. Trump delivered a video message to the group by satellite this year, and that Vice President Mike Pence actually walked at the front of the march.

Tastinger’s daughter, Anna, 15, attended the march with 27 of her St. Francis youth group friends this year. “I like to support the babies,” she said, when she stopped by her mother’s history classroom during planning period. Anna remembers attending the march since age 5, her mother reminds her she had been attending even before then.

When the mother of four—two adopted and two by birth– speaks about her annual trip to Washington, she is excited, motivated and full of positive energy. She only slows when she reflects on her son, swiveling in her teacher’s chair to look at his photo on her wall.

“He was a wonderful kid, and I’m just blessed,” Tastinger reflected, noting that the NC Kids and Foster Care Network website currently has about 100 children waiting for adoption. She spent five years with Shane from the day after his eighth birthday until the day he died. Shane was born in Raleigh and adopted from Orange County Foster Care.

“He was very thankful for his life,” she said. “He knew his situation and he understood his mom’s situation, and he thought it was very probable that he could have been aborted.”

In early January this year, Tastinger said she spoke to Shane’s birth mother, who didn’t know that she was about to attend March for Life.

“His birth mother confided in me,” she said. “She was going to abort him, and she chose life for him.”

Tastinger continued: “God worked it out to where we got him, and I can’t imagine that time without Shane.”

COVID cases climbing in Macon County and across the state

Macon spends more per person on library than surrounding counties