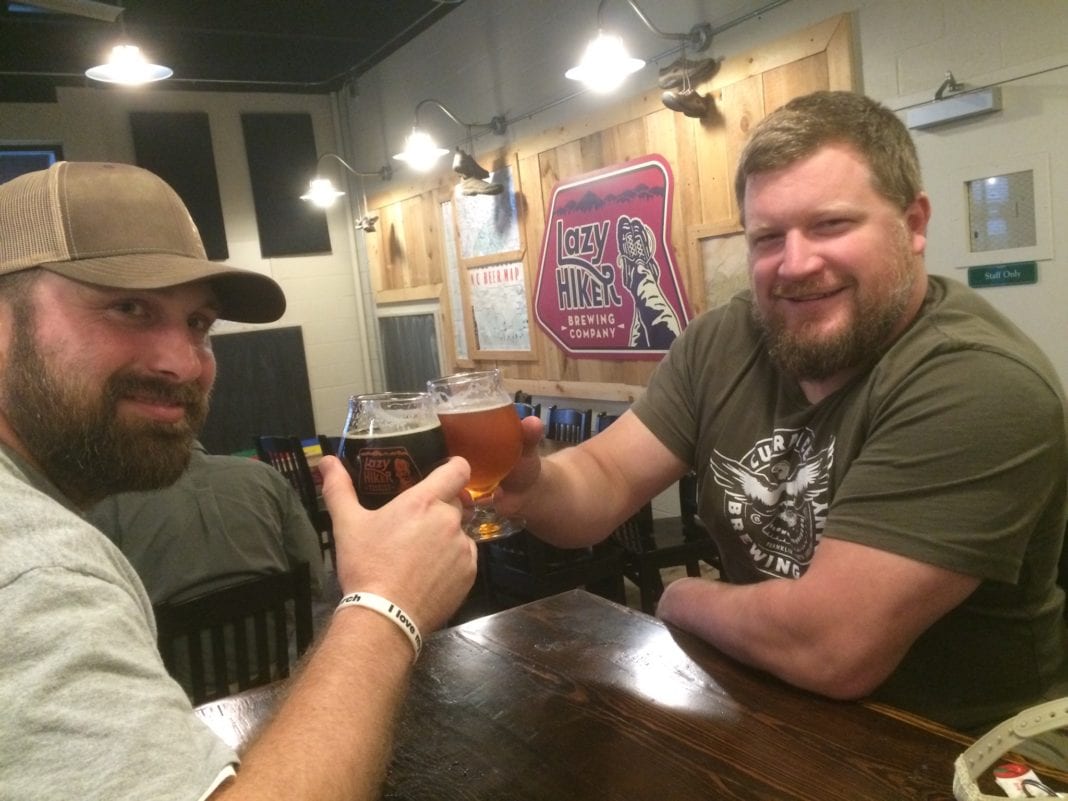 The annual economic impact of North Carolina-produced craft beer is estimated at $791 million, supporting more than 10,000 jobs across the state. With an opportunity to build on North Carolina’s rich agricultural heritage by sourcing local ingredients, Franklin’s two breweries operating just a mile apart in Franklin are working together to develop the “20 Minute Mile series,” a line of collaboration beers that foster community and inclusiveness in the craft beer world.

This weekend, Lazy Hiker Brewing Company and Currahee Brewing Company will be releasing their first in a series of collaboration beer that highlights the differences of each brewery, while coming together to produce a great local product for Macon County.

“We wanted to collaborate with Currahee Brewing Company because we believe that it’s important to form a partnership that embraces a sense of community in our small town,” said Alex Carrion, Taproom Manager at Lazy Hiker. “After all, we all have one goal and that’s to brew fresh craft beer not only to establish Franklin as more of a destination for our visitors, but also to provide a great product for our neighboring communities.”

The first collaboration beer between Lazy Hiker and Currahee, called the Christmas Stumbler, is a Belgian Dark Strong, brewed separately at each brewery. While both breweries used cinnamon sticks, orange peel, fresh ginger and the same recipes, they each put their own twist on the beer by using a unique Belgian yeast strain, to give the beers a subtle difference.

“This is our first collab beer, in a series of beers brewed together,” said Brandon Hintz, co-owner of Currahee Brewing. “The reason for the collaboration was really just to do something different, brewers and  breweries like keeping to what they know and do well. When you do a collaboration, you get to hear different ideas, things that sometimes you wouldn’t think of. We and the guys at Lazy Hiker have been discussing a collab for a while, we figured some type of Christmas beer would be a great start to the series.”

The Lazy Hiker will be celebrating the release of its version of the Christmas Stumbler on Friday, Dec. 16 at 6 p.m. with and Ugly Christmas Sweater Party.

This beer is actually going to be a two time release, one version of the beer will be released this weekend and the next will be released for Currahee’s Christmas in July party, which will be the same beer aged in red wine and bourbon barrels.

The goal of the collaboration partnership is to produce one or two beers a year and has been deemed the “20 minute mile series” because the breweries are just about a mile apart and it takes about 20 minutes to walk from one brewery to the next.

To celebrate the release of the collaboration beer, the two breweries are hosting a fundraiser run this Saturday, Dec. 17, at 12:30 p.m. called the 20 minute mile run. Participants will start at Currahee Brewing, drink a version of Currahee’s collaboration beer and then make the mile run to Lazy Hiker. There, participants will drink 10 oz. of Lazy Hiker’s version of the beer before running the mile back to Currahee where they will finish with another 10 oz. beer. The overall male and female winners of the race will get t-shirts from both breweries and any runners who can finish the run in under 20 minutes, will receive a pint glass from both breweries. The cost to enter the race is $15. Currahee Brewing and Lazy Hiker will be matching the amount raised in entry fees and making a donation to the Sky Valley/Scaly Mountain Fire Department, which is currently trying to raise funds to purchase a new fire truck.

The race will kick off Currahee’s release party for the beer, which will include Christmas movies, a special pancake dinner by the Mountain Fresh Food truck, and live music by Rachel Stewart.

To sign up for the race, all methods of payment are accepted in the  Currahee Brewing Taphouse or online at https://www.eventbrite.com/e/20-minute-mile-fun-run-tickets-30088633914. Must be 21 or older to enter and runner registration ends Friday, Dec. 16.