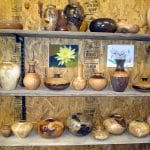 Fred Bulgin admits he’s a scavenger. In fact, he has a group of former colleagues who help him collect discarded wood. Bulgin retired in 2004 from Duke Energy but not from the friendship and camaraderie with divisions like the right-of-way group. These men and women, having been captivated by the works of art he created in his spare time, found it easy to contribute to his present woodturning craft. It is part of a family legacy of craftspeople steeped in historical contributions of wood and metal in Franklin, Macon County and the country. 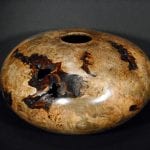 “Well, my great grandfather built the Episcopal church in Franklin,” said Bulgin. “He also built the big white gingerbread house (near downtown Franklin), and he built the courthouse in Hayesville. And my grandfather on my mother’s side, Fred Slagle, is a builder and cabinetmaker. George Bulgin, my grandfather on my father’s side, was a blacksmith, welder, etc. back around 1920. Daddy John (Bulgin) has wrought iron all around Franklin and a lot in Highlands. My brother and I built wrought iron for several years, and it’s spread all over the country, including Wild Cat Cliffs in Highlands.” 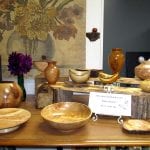 He was exposed to many crafts, but according to Bulgin, metal “chose” him for his professional career.  At Duke Energy, he worked as a welder, as a welding inspector, and then went into a nondestructive testing field, x-raying and examining metals. After leaving Duke, he became a metals consultant, traveling to Alaska, Canada and much of the lower 48 states. 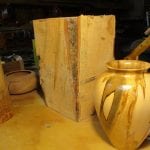 Bulgin soon felt his roots calling. He built a homemade lathe and began to work in his wood shop 10 to 12 hours a day for at least six days a week. As he began to perfect his craft, he wanted better tools and bought a larger, more professional lathe about five years ago, when he became more serious. Two years ago, he took classes and joined a professional wood turners organization, The Carolina Mountain Wood Turners. However, he credits his maternal great uncle Frederick Slagle, who lives up on Cartoogechaye, with teaching him quite a bit about turning. “Ever close” is not only his father’s instruction but also his old saw that the younger Bulgin “kinda rebuilt.” 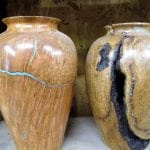 All senses are engaged upon entering Bulgin’s wood shop. The smell of the wood is sweet and inviting; the visual display of his finished work is intriguing; the feel of the wood is soothing; and the whir of the lathe is exciting to hear. It is easy to see how a young boy would become fascinated enough to learn and, then later in life, return to woodturning. Bulgin feels fortunate that he and his siblings were able to watch his father, grandfather and an uncle who were expert turners, and now his brother and both sisters are also into crafts.

“It’s his passion,” said his wife, Betty Ann Bulgin. “I’m just glad he has someplace to go (the shop) at 5 a.m. when he’s ready to start his day. And then I can sleep until a reasonable hour.” 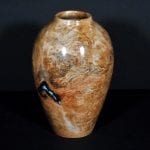 The long hours have paid off both in satisfaction for Bulgin and in greater exposure throughout the region. Much of his work is displayed at Creative Framing in Franklin, The Bascom in Highlands, and Mountain Favors in Waynesville. He has rotated out pieces in each of those locations as he perfects his craft and becomes aware of customer preferences. He is seeing a difference in response, including the past week when Creative Framing reported multiple sales.

“Beginning with beautiful pieces of wood, I create hollow vessels that exhibit graceful and blending lines and curves,” said Bulgin. 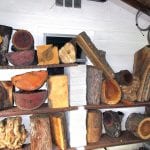 Bulgin showed pieces of wood collected through his scavenging efforts, finds from the Duke Energy right-of-way crew and gifts from friends. They included a shed full of varying sizes, types and shapes of wood, a specific piece of Osage orange from Florida and Camphor from Kentucky and some of his favorites – oak, cherry, walnut, maple, and dogwood. Then he demonstrated the wood turning process.

“You hold a piece of wood that you are going to turn in the lathe with a chuck, and you have to turn a tenon which is a projection on the end of your wood that will clamp into that chuck. The chuck is the part of the lathe that rotates when you turn it on.  Now when you turn it on, the piece of wood you’re going to turn will rotate. I also put the other end of the wood in what’s called a center so it’s between two centers that stabilize it as it turns.” 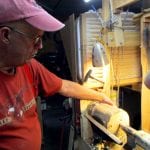 “Once I get it rough turned (that means I’ve turned it larger than what I’m going to have it when I’m finished), then I start drying it,” continued Bulgin. “I put it in a warm room. Before I start doing it, I have a baseline weight that may be three pounds. I will put it in the warm room for two or three days. I take it out, and I’ll weigh it again. What I’m interested in is not what it weighs but what it is losing. It loses weight and moisture. And I want it to finally almost stop losing weight. That way I know it after I’ve taken it out and weighed it every other day and maybe for two weeks. Finally when it stops losing weight, then I’m ready to start turning.” 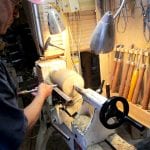 After Bulgin allows the moisture release, it helps stabilize the wood so he can begin to rough turn. Various time-consuming drying steps of the wood are involved before the final turning of a vessel. He explained rough turning as hollowing out a piece, which is his common practice. That’s when he goes inside and takes out the inside of a piece as opposed to just making a bowl or a plate. Some common items may be used along the way, including a hair dryer, small postage scale and a portable bathroom space heater for bulk drying. Bulgin explained a very complicated process where he works with various thicknesses, allowing for distortions so he has enough material when he puts it back in the lathe that allows him to turn it back to his true form and to get the shape he wants. Then he smooths and buffs. 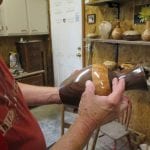 “I get my outside smooth,” said Bulgin. “Then I go and turn the inside, and it’s more difficult to sand. It takes some special tools, but once I have it sanded smooth and I’m satisfied and have all the turning marks out of it, then, I do a buffing process.  Finishing is a multiple-step process. When final form has been achieved by turning, each vessel is sanded, has a commercial liquid finish applied, undergoes two buffing steps and is then power-waxed while still on the lathe.”

This is an over-simplification for a very skill-intensive and complex process that continues to yield great results for Bulgin. Some of his intricate work includes enhancing natural crevices in wood by applying a small amount of copper or turquoise as inlays and mixing multiple species of contrasting colored woods to achieve customized looks. It is most important for him to preserve a graceful feel and appearance. Bulgin says he uses no technology other than a good lathe, good manual chisels and a small amount of power sanding. He should add a great dose of passion, creativity and pride.

Macon County School Board goes ahead with Plan “B” Schedule