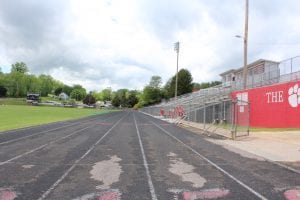 A year after the Board of Education began discussion on improvements needed at the Franklin High School track, the project is scheduled, although full funding hasn’t yet been secured.

The total estimate for the track resurfacing is $58,712. Macon County Schools currently has secured a donation of $27,500 for the project, which leaves $31,000 needed for the project scheduled to began later this month.

Macon County Schools Superintendent Dr. Chris Baldwin noted that hopefully after meeting with county officials in the next few days, the school system will have a better idea how to pay the remaining balance.

“The track is scheduled for resurfacing on May 23,” said Dr. Baldwin. “We will be holding a Joint Facilities Review committee meeting in the next few days.  Hopefully, we will have additional information at that time.”

Board of Education member Fred Goldsmith asked Dr. Baldwin for an update on the project last week during the monthly meeting, citing the disrepair of the track and the need to continue to move forward with the project.

The FHS track is the most widely used part of the high school and is used year round by not just the high school, but by the community. The track was last resurfaced in 2004 and is comprised of an EPDM rubber substance.

Each year, in addition to the more than $7 million in operating expenses the county allocates to the school system, county officials approve a capital outlay budget for “brick and mortar” improvements in the district. This year, at the request of county officials, county manager Derek Roland increased the district’s capital outlay budget to $300,000 for capital improvements in the school system.

The track repairs were left off of the list this year, due to more pressing needs in the district.

“There were a lot of other priorities, and we also knew until we did something with student parking, that we would have an issue with any sort of resurfacing,” Dr. Baldwin said in August.

In the coming budget year, commissioners have expressed their support for increasing the capital outlay budget again, which would provide additional dollars for improvement projects such as the track repairs, but the bid has already been submitted and the purchase order for the project is to be completed on May 23 of this budget year.

Threat of shooting at Franklin High School leads to speedy...

Macon Early College student’s head out for a field trip of...