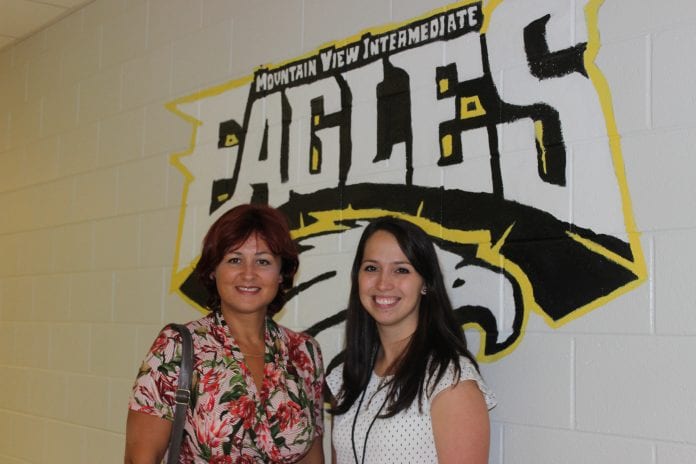 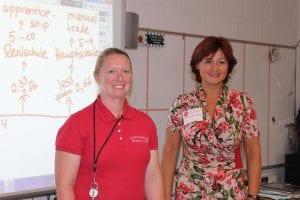 Having a pen pal conjures up nostalgic images of children sending handwritten letters across the ocean to foreign lands. These days with the Internet, the same relationship can blossom with pixels. Patri Cabe, a teacher who lives in Macon County, started an online friendship three years ago with Olga Hill, a teacher who lives in Bavaria. Part of their connection stemmed from the fact that both Cabe’s and Hill’s daughters have birthdays that are close together. Last week, the two met in person when Hill came to the United States for the first time.

Hill came to Franklin because of her friendship with Cabe and because, “As a teacher, I am very interested in how colleagues work abroad,” she said. “I am curious about what the lessons are like, since what I’ve seen in movies is not necessarily the same in real [life]. I’d like to talk with teachers to find out about what kinds of programs that they have, about how supported they are by the government. … Our profession is very important, and I think each country should do enough for the teachers because we raise the next generation. It depends very much on how we work with children … how the life is going to be in 20 years when these children are adults. When they start working, when they have their own families. If the teachers are not supported enough by good working conditions, and a salary and so on, and respect in the society, then the quality of the work will be worse.”

Hill teaches at Balthasar-Neumann-Realschule in Munich, Germany. The school 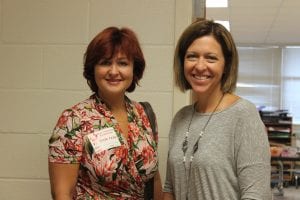 recently won a 10,000 Euro prize for work to improve the HVAC efficiency of the school, and for programs that teach about the environment.  Oliver Bauer, the teacher who was behind the work for this prize, also started activity clubs around carbon footprint reduction themes, including one to help students repair their bikes.

Hill grew up in Syktyvkar, Russia, where she attended the Komi State Teachers Training Institute. She has been teaching in Germany for 10 years. She described the system of schooling in Germany, which differs widely from the premises and structures of those in the United States.

In Germany, there are three tracks of schooling where children are separated by aptitude at the conclusion of Year 4 at about ten years old. The determination upon which track the child is placed is made by the child’s participation in class, his grades, and confidence demonstrated during the four years of elementary school. The evaluations from the teachers play a large part in deciding the path on which the child will likely succeed. The tracks are called “Gymnasium,” for those likely to go to college; “Realschule” for those children headed to average or white-collar jobs; and “Hauptschule” which is aimed at children who will likely work in trades and blue-collar jobs. Many parents put pressure on their children at a young age because their school work will determine whether they have access to university later in life. 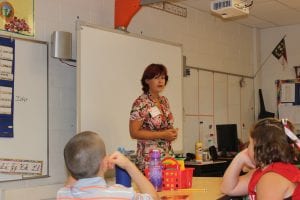 “If the parents don’t agree [with the determination of school track], if they want their children to go to a more challenging school, the high schools have sort of “probation days” for such children whose grades are not good enough. The children can go to these special classes for three days and again write tests. If the results of those tests are better, then the children can be accepted at that school. …They are tested basically on German and math. If the results are better than the results in elementary school, then they are accepted,” Hill said.

Another large difference between the school systems is the placement of children with special needs. Hill explained that, in Germany, Förderschulen or Sonderschulen are separate schools for those children who are blind, deaf, and those with physical or learning disabilities. The school of thought behind that system is that teachers who work with a class of approximately eight special needs children are better suited to focus on teaching them than if one or two children are mainstreamed into a class of 30. According to Hill, this practice puts some 430,000 German students into special, separate schools.

Home schooling is not allowed in Germany. Cabe introduced Hill to a family that home schools so she met children who have never been to school. “In Germany, that would absolutely not be allowed. You are fined 250 Euro per day for keeping children at home unless they are sick or have some other reason.” She continued, “In Germany, the whole state and society is invested in the children. In America, there is a chance to influence the children by only the parents.”

Because of Hill’s interest in meeting teachers and students, Cabe arranged for Hill to visit East Franklin Elementary and Mountainview Intermediate School on Friday, Sept. 2. The first noticeable differences were the Student Resource Officer and the locked front door. Hill thought that the security was a smart idea. “In Germany, everyone can just walk into a school. It is good that the children are protected in this way [here]. It is also good that as soon as you enter, there is someone at the school,” to answer questions or to direct you, she said.

Hill teaches German and English, and German as a Second Language (GSL). When she visited the local schools, she was impressed by the computerized English as a Second Language (ESL) tools. In Germany, while there are now some books, typically a GSL teacher has very little to choose from in the way of materials. For most of the past decade, Hill has had to make up lesson plans and tests because there were so few resources available. Hill has students who are from Afghanistan, Turkey, China, the former Yugoslavia, Vietnam and other countries. The variety of native languages adds an extra dimension of difficulty to the GSL program. Many of the parents came to Germany as guest workers. Children who came with them who were more than eight years old often have a hard time with lessons because of their difficulty learning the language. German is heavily reliant on structure and that, more than the vocabulary, seems to challenge the students. The principal at Hill’s school has recently increased the number of hours devoted to GSL classes in an effort to improve progress for the children in all classes.

“The schools are very clean and tidy, and well decorated,” said Hill after her visits on Friday. She sent a couple of pictures to a former student of hers and he, too, positively remarked on the décor and the cleanliness of the school. Another variation between the school systems of the two countries is that, in Germany, typically the teachers do not have their own classrooms. The children stay in the room and the teachers bring their materials with them every class period. She was impressed with the way Macon County teachers set up their classrooms and had storage for all of their classroom materials.

Hill made a presentation to Crystal Parker’s 4th Grade class at Mountainview. “I showed photos of my school and of Munich, and they were very interested. The nine-year-olds listened for one hour. I thought the presentation might be too long but they watched and were asking questions. The children here are more disciplined. Ours are more hyper.”

She said she had a very good impression of the local schools, teachers, and students.

In addition to the school visits, Hill’s trip has been filled with the activities that make Macon County unique. Cabe took her gem mining, hiking to a waterfall and to the rodeo in Cherokee, which was the first time Hill had ever been to that type of entertainment. “It was very, very special. I hope I can be equally good as a host in case she visits me,” said Hill.