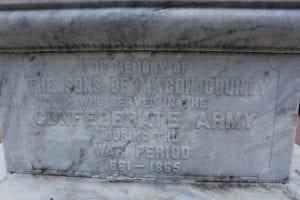 For 108 years, a confederate solider statue has been the centerpiece in Rankin Square in downtown Franklin. The monument was erected in memory of “The Sons of Macon County who served in the Confederate Army during the Civil War, 1861-1865,” according to an inscription on the statue’s base.

The monument weighs around 35,000 pounds and is made of 26 Italian marble stones measuring 25 feet high with a 6 foot statue of a soldier on top, but if North Carolina Governor Roy Cooper has his way, the monument on Rankin Square, along with more than 90 other monuments across the state will be removed and placed in museums, where he thinks they belong.

“We cannot continue to glorify a war against the United States of America fought in the defense of slavery,” Cooper said in a statement. “These monuments should come down.”

North Carolina is one of only three states — along with Virginia and Georgia — that have 90 or more Confederate monuments, according to the Southern Poverty Law Center.

Former Republican Gov. Pat McCrory signed a 2015 law that prevents removing, relocating, or altering monuments, memorials, plaques and other markers that are on public property without permission from the N.C. Historical Commission. The law protects statues from removal by officials, but protesters pulled down a Confederate statue at the old Durham County courthouse Monday. Durham’s Confederate Soldiers Monument, dedicated in 1924, stood in front of an old courthouse building that serves as local government offices.

White nationalists in Charlottesville were protesting city plans to remove a statue of Gen. Robert E. Lee when they clashed with counter-protesters. A car ran into a crowd of people, one woman died and dozens were injured. Gov. Cooper said that in light of the event in Charlottesville, he believes the monuments around the state should be removed.

The statue in Franklin specifically names seven units who fought in the way and originated from Macon County. The county’s first Confederate military force was Company H, Sixteenth North Carolina Regiment; they were honored with their inscription placed directly above the primary inscription. The three remaining sides of the monuments each display an inscription to an infantry unit and below, a cavalry company.

According to the University of North Carolina, the monument cost $1,650 when it was constructed and was dedicated with quite the ceremony. UNC archived that roughly fifteen hundred people were present for the unveiling of the monument, including sixty veterans and the governors of North and South Carolina. The two-part ceremony was conducted by W. A. Curtis. The monument was unveiled by a cord pulled by seven women who were descendants of the commanding officers of the seven companies from Macon County who served in the Civil War.

The first part of the ceremony included a speech by North Carolina governor W. W. Kitchin and songs sung by the Franklin Choir. The party broke for a meal in which the veterans and governors dined at the Junaluskee Inn, returning later in the afternoon. Then, Miss Clyde McGuire recited a poem called “The Conquered Banner,” which was the same poem her mother orated twenty years prior at the first reunion of Macon County Veterans. The poems were both recited under a torn flag of the 39th N.C. Regiment. The flag was held by J. W. Shelton, the last remaining color bearer of the regiment. The recitation was followed by a speech given by Governor M. F. Ansel of South Carolina, and sketches of each of the seven companies, written by Major N. P. Rankin.

The statue was sold by the McNeel Marble Company from Marietta, Georgia, which produced many other Confederate statues including the Confederate monument that was just illegally removed in Durham.