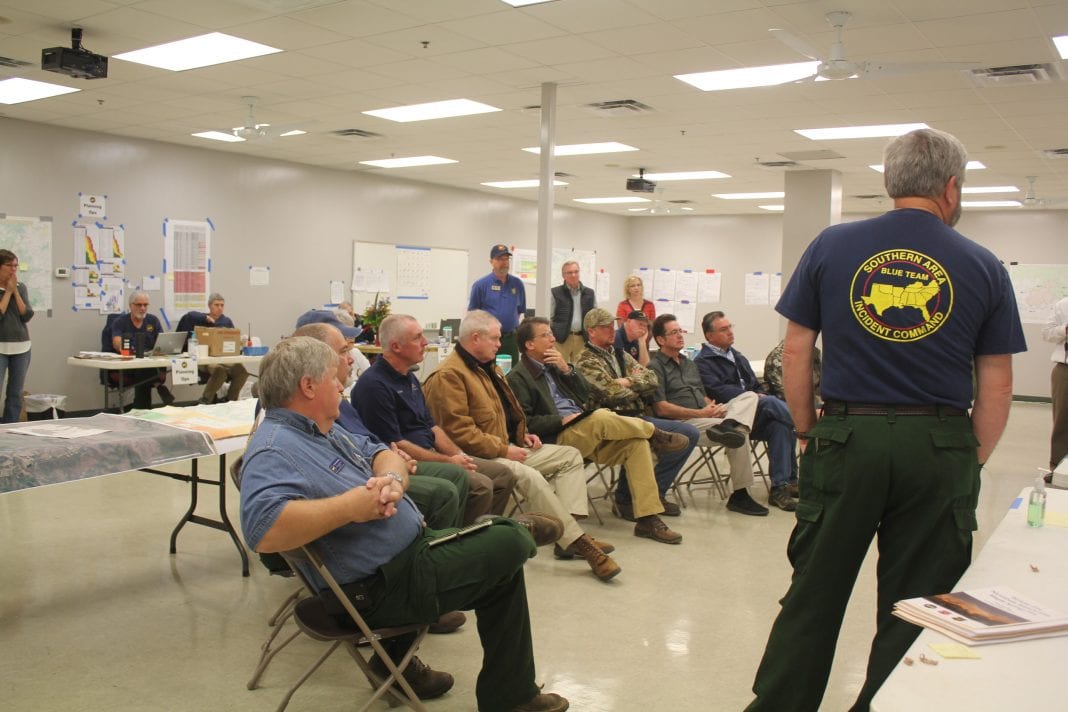 Macon County officials met with North Carolina Governor Pat McCrory on Wednesday morning at the Incident Command Center located at the former Caterpillar plant. Officials were briefed on the Rock Mountain Fire, which is pressing its way into Macon and Clay counties from Northern Georgia. Officials were also notified of a new fire that was reported just after 5 a.m. this  morning on Wayah Woods Lane.

“We are still averaging about a fire a day,” Mike Wilkins, District Ranger for the Nantahala National Forest informed Gov. McCrory. “The new fire will probably grow to around 500 acres before we have it contained.”

Macon County’s newest brush fire was reported at 5:22 a.m. on 510 Wayah Woods Lane and officials immediately responded. Until the Wednesday morning fire, officials informed Gov. McCrory that much of the focus in the region has been on containment of the 26 active wildfires burning nearly 30,000 acres in Western North Carolina.

“We are grateful for the support that the Governor, the state, and the U.S. Forest service has shown since the fires first started last month,” said Commission Chair Kevin Corbin. “We face a new challenge everyday, but together we are working to ensure our residents are as safe as possible.”

The Rock Mountain fire, which originated in Clayton, Ga., has been burning for just over a week in North Carolina and focus and resources are currently being shifted to help build containment lines and enforce structure protection around homes in that area. The Mulberry Community in South Macon County will likely be the only area impacted by that fire. The most significant threat to Macon County at this point, is the Rock Mountain fire, which has reached 16,698 acres with only a 30 percent containment. The fire has 467 personnel working on the fire, which was first reported on Nov. 9.

“These fires are unprecedented and the diligence of the communities, the volunteers, and the firefighters from all over the United States who have come to help is truly remarkable,” said Gov. McCrory. “The firefighters and these communities enduring these wildfires are truly resilient.”

The Tellico Fire, which sits at 91 percent contained, has reached 13,874 acres, but is being well managed by forest service crews.

Earlier this month, Gov. McCrory visited Clay County to visit the site of the Boteler Fire and commented on how much the conditions and air quality have worsened in the few short weeks since his last visit.

According to the governor, an emergency session of the legislature is likely the first few weeks of December to discuss emergency funding for both Hurricane Matthew on the coast and the wildfires ravaging the western part of the state.

On Tuesday night, the forest service held a public information meeting at the Otto Community Building to inform residents of the dangers being presented by the Rock Mountain fire and let them know to remain alert and to please listen for evacuation notices that may have to be issued for safety.