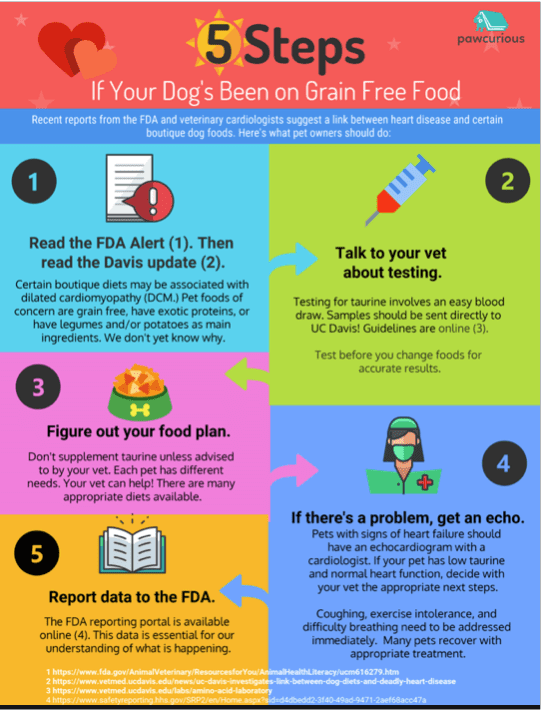 In 2017, a handful of Veterinary Cardiologists began noticing an increase in patients being diagnosed with Canine Dilated Cardiomyopathy (DCM) a disease of a dog’s heart muscle, which can often result in congestive heart failure. They also made the connection that dogs being diagnosed with this serious condition were consistently being fed certain types of diets. The research revealed that the cause of this uptick in cases was that many canines had critically low levels of the amino acid, taurine. When given a taurine supplement and change in diet, along with cardiac medication, most patients improved. A study conducted by the Food and Drug Administration (FDA) reports from a five year period, January 2014 – April 2019, 524 reports of DCM (515 canine reports, 9 feline reports) in which the animals were all being fed some type of grain-free diet.

One of the arguments supporting grain-free diets for dogs is the fact that wolves, the ancestors of dogs, don’t eat grains in the wild. However, dogs aren’t wolves and over time they have evolved to be able to consume grains and carbohydrates through living alongside humans. The real reason grain-free diets for dogs have become so popular is not because they are necessary, but because they are easy to market. Pet food companies are universally digging in and issuing press releases defending the safety of their diets. However, the FDA stated that it has received many reports of non-DCM heart disease and cardiac symptoms in pets during the reporting period and only included those with a confirmed DCM diagnosis in the numbers reported. The FDA cautions that cases of DCM and other heart diseases may be underreported.

Not all grain free diets are created equal. Many brands that sell grain-free dog foods are replacing nutrient-dense meats with plant-based proteins like potatoes, which are an inadequate substitute for real meat. When dogs are fed grain-free food, it usually ends up having more fats and more complex carbohydrates from those replacement ingredients such as potatoes and lentils, which leads to weight gain over time – just like in humans. The depletion of taurine, which plays a vital role in cardiac functions in dogs may be linked to grain-free dog foods that are using meat alternatives and dogs aren’t receiving the proper protein to produce the taurine that they need. This is not the case with fresh diets, where whole, quality meats are a sufficient source of taurine.

Along with causing weight gain, low quality grain-free diets may actually contribute to DCM and other types of heart disease. More than 500 grain-free dog food brands are currently being investigated by the FDA for their effect on DCM in dogs and a list of brands thought to be directly linked to the disease has been released. Cardiac exams and diagnostic tests are cost prohibitive for many families and many pets are treated only to alleviate their symptoms, so the true number of pets suffering from DCM or other cardiac conditions may be substantially higher. While the FDA has not mandated a dog food ban,it does warn against food that contain a lot of lentils, peas and potatoes. Each dog food manufacturer listed in this report doesn’t have just one formulation of food, most of them have many different formulations.

A Franklin vet suspects it was very limited formulations that would be implicated and it is a pattern that has been emerging quickly. He said, “of the canines reporting to eat ACANA dog food, a full 55% of the cases were on one of three limited ingredient formulations: lamb & apple, pork & squash, and duck & pear.” His conclusion, after reading the hundreds of cases submitted to the FDA, is that hundreds (and maybe thousands) of canines have become ill, and certain diets – particularly very limited ingredient diets – fed exclusively for long periods of time are a common denomination in this problem. The following are the dog foods on the FDA warning list:

Taste of the Wild (53 reports)

One of the alarming aspects about DCM is that it won’t show any notable symptoms until the dog is very sick. Pet owners are advised to take preventive measures against DCM and other heart diseases by consulting with your vet about diet choices. Vets suggests that if you have been feeding your pet the same diet without any variety for more than one year, change their diet if it contains lentils, potatoes, sweet potatoes, beet pulp, and corn. Avoiding foods containing any bi-products of any sort is also recommended.

Cooking your own food for your dog is another option. Here is a basic cooked recipe that you can make at home.

2 pounds of lean ground turkey or chicken, cooked – drain fat if you don’t use the ground breast.

Mix all ingredients together. Recipe should yield 8 cups of food.

• Be alert for early signs of heart disease. A sudden decline in energy level, such as tiring out on walks more quickly; coughing, fainting, general weakness and lethargy are all classic symptoms of heart problems. If you are able, schedule a comprehensive physical exam for your pet. If diagnosed early, pets have a better prognosis for recovery.

• Change your pet’s diet. if you have been feeding the same diet without any variety for greater than a year. Change their diet if it contains, green peas, pea protein, pea fiber, pea starch, garbanzo beans (chick peas), soybeans or soy products, lentils, potato, sweet potato, beet pulp, and corn. Avoid foods containing “by-products” of any sort.

When you feed dogs a healthy diet they will feel better and will be around for you to love and play with for years.

County looking at ways to reduce the number of involuntary commitments