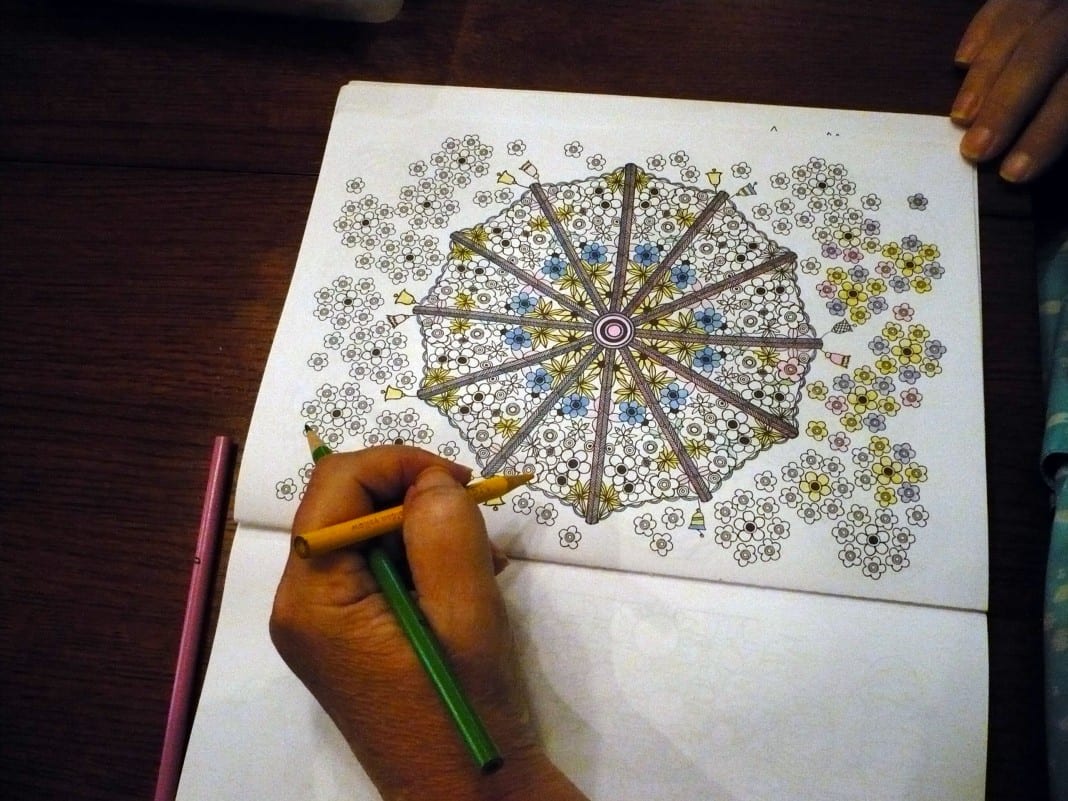 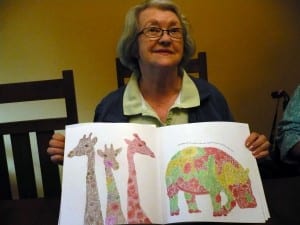 Coloring books bring back childhood memories. However, the pages have become much more complex since that box of colorful Crayola crayons was last opened. Last year, a group of women at Grandview Manor found that they had a common interest in coloring.

“Some time back, a great thought occurred that we all needed something to do that would be fun and productive,” said Cookie Paquette, one of the core members of the group. “And coloring came to mind. And here we are.”

They had been coloring in various coloring books when Deborah Strum, director of Grandview Manor, suggested that the pictures would look very pretty as placemats. Pam Tillis, activities director, brought the completed pages to Franklin Office & Art Supply where they were laminated with the guests’ names so that they could also serve as place cards at meals. “We use them as a way to identify people’s dietary requirements,” said Pam. “When those were done, there were people who left notes on my desk that said the placemats turned out beautiful. They’re fun.”

“We started coloring in October,” said Martha Rogers, familiarly known as Martha 1. “And

While these women color together in a common room, according to Tillis, some guests of Grandview Manor color in their rooms.

They buy their books and the selections are as varied as the women. Some of the books they use include traditional henna designs, animals, whimsical gardens and art masterpieces. The details involved take a sharp eye and a steady hand. 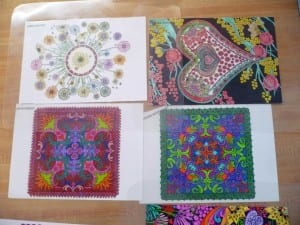 “This is the thing, one of the ladies that…illustrated one of these books, basically said, ‘It doesn’t matter. If frogs are green, what does it matter if you do a blue one or a purple one?’’ said Martha Lind, known to the group as Martha 2. Martha 1 piped in with, “It’s our choice.” Martha 2 continued, “It gives you a great deal of liberty.”

“Well, I was told when I was handed the book, the rule is there are no rules,” said Kathy Maps. “I just started in January, I didn’t even know these things were out here. Too much fun.”

“There’s so many books out there that they have to offer, just go on the Internet, it’s incredible what’s out there. And then the ladies that get to Michael’s are just raving about how many there are,” said Kathy. “As a matter of fact, I was in the bookstore and a woman working there said she had to take her mother over to Mission … she was in the waiting room, they had pictures that they had torn out of the books, they didn’t have the books, just the separate pictures in the waiting room, and color crayons for people to pick up where someone else left off. I thought that was cool.”

The time they invest in this activity varies. “I spend hours, hours,” said Martha 1. “It kinda keeps us out of trouble.” Kathy chimed in,”How many hours in a day, let’s deduct from that. I could sit here all day.” Jean Bartel concurred.

“The other thing about this is, that when people are in here doing this, it’s really 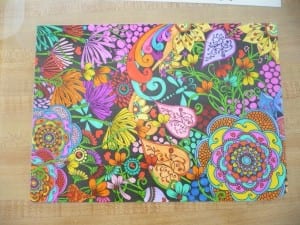 peaceful,” said Martha 2. “People are engaged in what they’re doing so there’s no arguing, no fighting over which tv station to watch or anything like that, people are just engaged in this thing they do. As you can see, everybody’s got a different kind of book. There’s nothing here but companionship and you doing something you really enjoy.”

Jean said that after coloring she feels “Relaxed, relaxed…I keep looking for new ones to do and I’m saving this one (pointing to her book as she leafs through it) because it has flowers all over it. I just have a couple left in my book, so I’m saving them for special times.” She points to a particularly intricate design, “This one would take a lot of work to do so I’ll get to that later.”

Martha 1 said that she is,” very pleased usually, very pleased, that I did something that pretty, to my eyes anyway.”

“I have three of them framed in my room, sunflowers and a couple of Monets that I did,” said Kathy. She gave a coloring page to a friend who has it framed in her room. “I also gave her a free-hand drawing, first one I’ve ever done. Now I would like to take some art classes. Another good thing about these is it’s the most inexpensive hobby I’ve ever had in my entire lifetime. I’m only 29, like Pam, but the fun and the enjoyment that you get out of it… these books are inexpensive. The Masterpiece book that Martha 2 just held up was $8.99 for 60 pages.”

Martha 2 said, ”The originals are on the front and back covers so you can see what they look like…What’s so neat about it is, when you look around this table, there’s just all kinds of different ways of looking at things,” said Martha 2. “And they’re beautiful.”

“It’s a strange thing to get an idea, and start just thinking out loud about it, and people jump into it. And then there you are, and you’re surrounded by all this talent, and you’re sitting here like a dork ‘cause I’m not an artist. These people are. I only stand back in amazement. Such talent we have here. Amazing. They do beautiful work. Me, I’m a colorist.” Cookie said. Kathy added, “You just pick out a color and go with it.” Cookie continued, “There you go. It’s nice, it’s comfortable, it’s easy, you don’t have to travel, it doesn’t cost much money. What more do you want?”