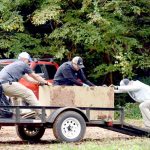 Last Saturday was bright, beautiful, cool, and for some people, wet. Hosted by Mainspring Conservation Trust, the annual Little Tennessee River Cleanup involved multiple volunteers in various areas of the river pulling out large pieces of trash, such as a sofa, pieces of metal, old tires, and more, as well as collecting plenty of discarded cans and bottles around the river’s edge. 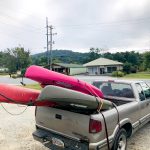 “The weight was just over 2,500 pounds, which was 500 more than last year. It’s exciting that we removed this much debris out of and around the river, but disheartening that littering continues to be such a rampant problem in Franklin,” said Newcomb.

Focus on a ‘Living System’

While there are many at Mainspring and other entities who are tuned into the environmental needs of the river, someone who has spent a good portion of his life in or beside the Little Tennessee is William (Bill) McLarney, Ph.D., an aquatic conservation biologist.

Before settling along the Little Tennessee River in the Oak Grove community, Dr. McLarney worked in aquatic ecology in such areas as the Great Lakes region and in Alaska. Currently, he splits his year between Macon County, where he has directed a biomonitoring study of the upper Little Tennessee watershed for more than 30 years and the Talamanca region of Costa Rica. He said he was motivated to make fish his life’s work after his father took him fishing as a young boy.

He explained that the watershed includes all streams and creeks that flow into the river starting in Rabun County, Georgia, and flowing down through Macon and Swain counties in North Carolina.

“The upper Little Tennessee watershed is an outstanding biodiversity resource; in particular, the 27 miles of free flowing river between Franklin and Fontana support the most nearly intact assemblage of aquatic life in the southern Blue Ridge.”

Dr. McLarney’s ongoing Biomonitoring Program at Mainspring is nearly unique in its effort to involve local people in the process and in subsequent conservation activities. The program has been recognized with the North Carolina Governor’s Award for Water Conservationist of the Year in 1994 as well as numerous other awards throughout the last few decades, including the American Fisheries Society’s Fred A. Harris Fisheries Conservation Award in 2014.

Often accompanied by other students and conservationists, Dr. McLarney spends much of his spring-to-early-fall days conducting biomonitoring surveys on the streams and creeks of the upper Little Tennessee watershed. Essentially, the health of the waterways is tracked by studying the fish and organisms that live there.

“So if an excessive numbers of stonerollers are in the creek, you could conclude that the water is inadequately shaded,” said Dr. McLarney. “All kinds of information determines if the habitat continues to be livable or unlivable for sensitive species. And we also learn, potentially, how to fix problems of urbanization and agriculture, which change the rivers over time.”

Conserving the water quality of Western North Carolina, including the Little Tennessee River, is one of the main goals for Mainspring Conservation Trust, shared Newcomb. Mainspring’s ongoing efforts have resulted in more than 35 miles of protected streambanks, making it one of the cleanest and biodiverse rivers in the Blue Ridge Mountains.

While periodic cleanup efforts and general river health education are both imperative to the overall viability of water bodies, Dr. McLarney encourages anyone interested to participate in periodic Stream Visual Assessment Protocol activities, which teach people how to observe the elements of the water habitat.

“Anyone who is observant can be trained to do it,” he said. “Volunteers or people that live on a stream can and should learn this.”

He added, “Part of the purposes of all this is to encourage and motivate younger people to take an interest in this field of work that has been my life’s work … to motivate and educate.”

For more information about how to get involved in Little Tennessee conservation efforts, visit www.mainspringconserves.org, or contact Rachel Newcomb at 524.2711, extension 305.

Local business helping gift visitors with a taste of Franklin