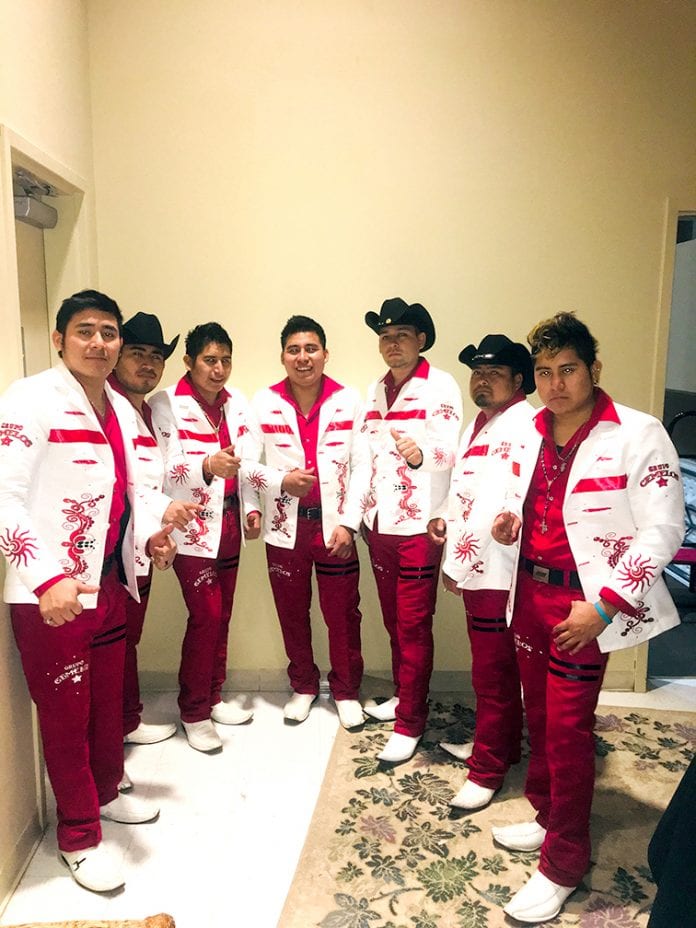 When twin brothers Pedro and Moises Candelario García, 19, were kids back in Oaxaca, Mexico, they had a special talent for music. By age 3, Moises was already playing the drums on empty milk containers.

Their grandparents took notice, asking their parents who were already in Franklin to send money earned from restaurant and construction work back to Mexico to buy instruments and pay for music lessons.

As they grew up, the brothers joined up with family members and became the centerpiece of a seven-person band called Los Gemelos, “The Twins.” They played ranchera – a traditional Mexican music inspired by rural folk and mariachi styles – at weddings, baptism parties and quinceañeras, a girl’s coming-of-age 15th birthday celebration.

But slowly, band members began to join family in Franklin, breaking up the family unit. Los Gemelos still played in Oaxaca but were losing cohesion. Their gigs weren’t as big and less-committed replacement musicians were no shows.

“My uncle and older brother, who also played, were already here,” said brother and bassist Jesus Candelario García, 22, in a Spanish-language interview. “We had to bring them here and get the group back together.”

Virgin of Guadalupe Festival in Franklin

Franklin’s Mexican population was more than 2,200 or 6.6 percent according to the 2010 census. More than 400 regularly attend Sunday Spanish-language mass at St. Francis Catholic Church and about 300 attended the Virgin of Guadalupe festival at La Poblana party hall on Depot Street last Wednesday.

“With the current group of organizers, we’ve been celebrating for about 10 years,” said festival organizer Gabriela Montero, 33, in a Spanish-language interview, after preparing food and helping to serve 17 multi-generational tables of guests.

Music is an important part of the Hispanic community’s biggest celebration of the year. Three years ago, Montero brought in a ranchera band from Atlanta, complete with trumpets, tubas and tambor drums.

“A lot of people are very interested in not losing the tradition,” she said, noting that locals hail from the Mexican states of Guanajuato, Michoacán, Oaxaca, Guerrero, Jalisco and one person is from San Luis Potosí. “In my state, we have a lot of fireworks for Guadalupe, just like the Fourth of July.”

The annual religious festival in Franklin starts with prayer at St. Francis and ends with a feast and celebration, including a showcase of traditions from across Mexico. Montero said the community has held a range of creative fundraisers to put on the event.

“For the past eight consecutive years we have had Miss Franklin Latina,” she said, proudly. This year’s winner, Brandy Zagal, 15, of Highlands, raised $3,500. Runners up, Natalie Camacho, 13, of Franklin, and Karla Díaz, 14, of Highlands, rounded out the $7,000 in donations needed to put on the event.

Getting the band back together

“We never thought we would make the band again,” said uncle and Los Gemelos bandleader/guitarist José Simón García Ruíz, 26. “We were working here—working, but we were thinking: ‘This town, they need a band, too, a Mexican band, a Hispanic band, to play because they have a lot of parties here, too.”

In 2015, after the group had been separated for about four years, Pedro and Moises Candelario García arrived to Franklin. But Moises traded his drumsticks for a spatula and worked in the kitchen of L’italiana Restaurant on Highlands Road, while Pedro went to work in construction.

“We came here for work, but when I saw everyone together – he played piano, he played drums, other guys sing – I said, ‘Why don’t we start the band again and buy the instruments?’” he recalled.

On the feast of Our Lady of Guadalupe in 2017, Los Gemelos were reunited for the first time. On Wednesday, the band celebrated a year playing together at the Guadalupe festival.

“Now, we play everywhere here. In Franklin, I know every building,” said García Ruíz. “We are the one, the only one that a lot of people love in this town, in Franklin.”

Toy museum in the works for Franklin