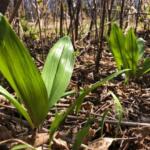 Some people refer to them as wild leeks, but the pungent smelling native plant is accurately called Allium tricoccum, or ramp. Ramps have been described as a cross between a green onion and garlic and have been a culturally important flavoring food for centuries. According to Michelle Baumflek, research biologist for the Forest Service’s Southern Research Station in Asheville, ramps are even sought after by chefs all over the United States.

“The green part and the leaves are delicious,” she said. “They can be sauteed with vegetables, put it in meatloaf, eggs – all kinds of dishes.”

Baumflek, an ethnobotanist, studies the relationships between people and plants.

“And, ramps are a big one in that category,” she said. “Ramps have been harvested in this area for thousands of years; in fact, there are so many people in Franklin and other areas of Western North Carolina who harvest ramps. Although I study them, the native people know more about ramps because of their multigenerational family experiences in the harvesting and eating of ramps. I am always open to learning from them.”

Ramps mature in the Appalachian Mountains from March through April and are one of the earliest spring greens, playing important cultural, nutritional, and socioeconomic roles for many communities, including for Cherokee peoples.

“There are a few ongoing projects involving ramps … one of those is with the Eastern Band of the Cherokee Indians,” said Baumflek.

Retired U.S. Forest Service scientist Joan Walker monitored populations of ramps in the mountain coves of western North Carolina for many years. Last year, she presented at Cowee School Arts and Heritage Center, sharing not only the importance of ramps to the local culture, but she also focused on sustainable harvesting practices.

“She set up a population monitoring study in the Nantahala National Forest due to concern about over-harvesting of ramps,” said Baumflek, who explained that each national forest has specific regulations regarding harvesting ramps, whether for personal or commercial use. For example, an individual might be able to harvest a small bag of ramps in the wild without any restrictions. But if someone wants to harvest larger quantities, to sell commercially at a roadside produce market, for instance, he or she will need to register with a ranger station and acquire a permit.

“Ramps are perennial plants,” said Baumflek. “If they are starting from a seed, it might take five to seven years for a plant to get large enough to harvest. People have really different opinions about whether to take the bulbs, take the whole plant, or just take part of the plant.”

One sustainable way to harvest ramps is to cut only one leaf and leave the bulb and second leaf to continue growing. Baumflek suggested harvesters “at least leave some of the bottom of the bulb part, where the roots are, in the ground and then the ramps have a better chance of growing back.”

To responsibly take part of a ramp’s bulb, a harvester can insert a knife into the dirt at an angle and slice off a part of the bulb but still leave most if it so the roots continue growing.

“We’ve seen unmitigated poaching and decimation of some patches particularly at Standing Indian and Jones Creek areas,” explained Angela-Faye Martin, who owns and operates Alarka Expeditions/Institute with her husband Brent, the executive director of the Blue Ridge Bartram Trail Conservancy.

“The unfortunate thing is that the USFS [United States Forest Service] doesn’t have the law enforcement capacity to enforce the limits,” Martin added. “The correct way to harvest them is pain-staking; you need a sharp knife and you must leave the threads in the ground. I’ve seen people use regular shovels making it look like Russian boars have ravaged the place.”

“A lot of people harvest properly and respectfully, but some people do not,” noted Baumflek. “It’s important not to over-harvest one spot.”

For individuals who find a ramp patch growing in their yard or woods, they can nurture the patch and just take a few ramps for use annually or harvest the green parts like a green onion and leave the bulbs and roots underground to continue maturing.

Don Deal, Deal Farm, who sells produce weekly at the Franklin Farmer’s Market, sells ramps in season. He said a ramps patch was started about 20 years ago and has re-seeded to include approximately one-half acre of the aromatic plants.

“You can either put the whole plant in the ground to start a patch or at least part of the bulb,” he said. “They need to be planted in full shade, in moist soil … ideally above or near a stream.”

Deal said he has always eaten ramps and suggested that soups, fried potatoes, eggs, and salads and salad dressings benefit from the flavor of the wild native plant.

Anyone uncertain about identification of ramps in the wild or proper harvesting techniques can consult online instructional videos, and additional information is available on Forest Service and U.S. Department of Agriculture websites.