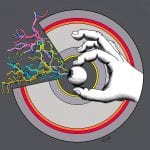 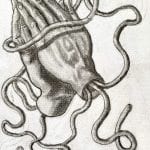 Last month, Elijah Hawkins, a sophomore at Western Carolina University, and a 2019 Franklin High School alum, was awarded the Arts Council of Macon County’s annual $1,000 art scholarship for the second year in row.

Hawkins did not realize he had an innate talent for art until he began doodling in his chemistry notebook. Since elementary school, he had been drawn to science. By the time he entered Franklin High School, he was set on becoming a marine biologist. However, over time he began to recognize that the doodles in his chemistry notebook were taking on a life of their own – and improving in their imagery and clarity.

“I never took an art class in high school, just one in the sixth grade,” said Hawkins, “so it’s interesting that this ability just happened.”

The Arts Council recognized Hawkins’ artistic ability, and learned of his dedication to art through recommendation letters from some of his professors. Although he is now pursuing a degree in fine arts with a graphic design focus, he said he was self-taught until he entered WCU.

His interest in science, however, is conveyed through his art, which he describes as “noodling abstract … grotesque, but not in a gory way … more biological with split images.”

One modernistic image, for example, conveys a hand holding an eye ball with what resembles veins reaching out of the pupil area. Another is of severed praying hands with worm-like images emerging out of and around the hands.

Hawkins has sold two of his pieces so far, and he adorned a guitar with his art. Although he realizes he will need to most likely make a career as a graphic artist, he said, “I hope to one day make money from my original art work.”

He added, “I’m very grateful for the support of the Arts Council.”