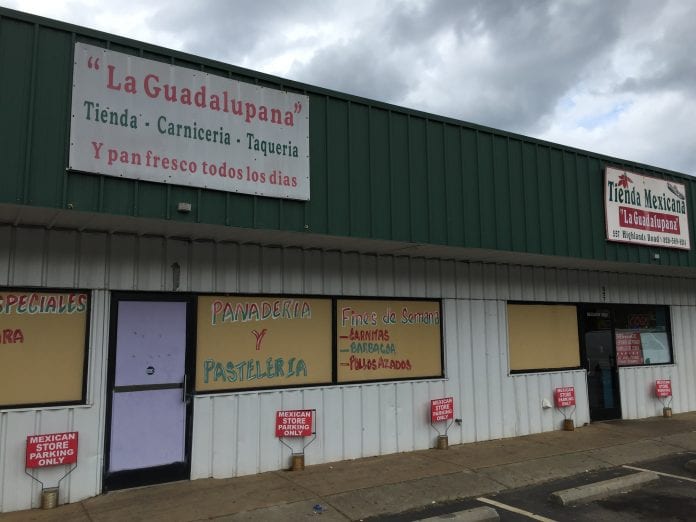 Hispanics in Macon County are not afraid to call the law. 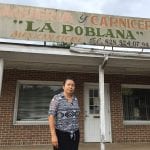 La Poblana Mexican store and restaurant on Highlands Road was hit by burglars three times in a month. Nearby La Guadalupana was hit twice. La Abeza on Georgia road, which is owned by an Anglo-American, was also hit, all in August. Each time, shopkeepers called authorities to respond, and through a mix of hand signs and interpretation from bilingual family members, authorities obtained clues that led to an arrest within weeks.

“They think that because we are Hispanics we aren’t going to do anything, that the police won’t do anything for us,” said 17-year Macon County resident Sabina Flores, a native of Puebla, Mexico.

“That’s what I thought, at first,” she added, describing the robberies in Spanish in the empty dining room of her restaurant. The smell of grilling meat and spicy peppers wafted from her kitchen on the morning before a suspect’s arraignment. “But yes, they work. Yes, they did it. And yes, the police have already taken the first [suspect] into custody.”

Flores admitted there is a language barrier communicating with authorities, but that didn’t discourage her from reporting the crimes.

None of the 18 Franklin Police Department officers nor any of the 22 Macon County Sheriff’s Department officers are fluent in Spanish. But they get by. When necessary, they rely on Josie Alonso, a bilingual receptionist and interpreter at the Sheriff’s Office. Macon County’s majority Mexican-origin Hispanic community had 2,246 members, or 6.6 percent of the population, according to the 2010 census.

“They did everything they were supposed to do, which helped us,” said Police Chief David Adams. “A lot of Latinos may be afraid of the law enforcement in the countries where they come from. That’s probably part of the perception by these people involved in the illegal drug market.”

Surveillance cameras provided key evidence in the first La Poblana robbery. In the footage, a man with his head covered by a garbage bag walks up and down the store covering and turning away the cameras.

“But he didn’t realize there was another right here,” said Flores, 54, turning to point over her shoulder at a place where a camera once hung.

La Poblana’s second robbery took place with a key entry shortly after the owner briefed her employees on the nature of the first robbery. The morning of the second robbery two former employees failed to appear to work and $9,200 of patrons’ money was missing. Money that did not belong to Flores, but was destined for wire transfer to families in Mexico. Those suspects remain at large.

By the third La Poblana robbery, the cameras were also stolen.

“They must think that we will keep our mouth shut and not say anything. Sometimes it is the case because of the language barrier,” said Jolanda Montero, a Guanajuato, Mexico native who along with her husband have operated La Guadalupana Mexican store on Highlands Road for 13 years.

An exposed leg tattoo captured on camera helped police identify the suspect, even though he had covered his face and head with a hat and sweatshirt, turning away cameras before stealing about $1,000 from the cash register.

An August 15 Sheriff’s Office report on the La Abeja robbery indicates that even though the surveillance camera system was stolen– including footage of the robbery– owner John Bailey handed over footage he had saved from the night before, when two suspicious persons entered his store.

“When something like this happens, we have always called the police,” Montero said in a Spanish-language interview, standing beside her husband at the entrance to her store. Montero added that police have increased patrols and stop in the store from time to time to check that everything is all right.

An officer awakened employees of La Poblana at their nearby home on September 18 when he noticed a back door had been tampered with and left open, potentially preventing a fourth robbery at that location, according to Flores.

Aaron Michael Waugh, 39, of Franklin, was arrested August 19 and arraigned August 28 on charges of stealing $629 in April from the Little Caesar’s Pizza store where he worked. In the days before his arrest, he allegedly went on a spree of robberies that targeted the three Mexican stores, according to court documents, and police and sheriff’s reports.

“With their assistance we were able to identify the suspect and get him arrested,” said Chief Adams, who commended the victims for their cooperation and confirmed that Waugh was linked to all three crimes.

“We’re a little better now than before knowing that they are more vigilant,” Montero said of the increased police patrols. “We only ask that they don’t forget us, so that we can feel safer.”