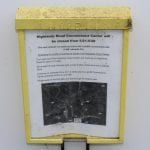 One of Macon County’s busiest recycling centers will be closed this week, pending inspection and repairs.

Located alongside 2116 Highlands Road, the Cullasaja area facility will be closed to the public until at least May 28, according to Chris Stahl, director of the county’s Solid Waste Management program. Stahl said the closure was due to “needed repairs to the wood-beam retaining wall.”

He noted that a portion of the wall was replaced several years ago, and the remaining sections are now being finished off for general safety purposes.

“We expect the construction to take two to three days; weather permitting,” he said. “Once the contractor’s equipment has been removed and we can pull the forms, we will reopen the site.”

Stahl explained that the wall repair is due to wood beams rotting. Contrary to what some in the community have speculated, he said, the closure is not due to the county discovering a sinkhole beneath the site.

“The wall replacement is not tied to a sinkhole,” he said, emphasizing the issue is time and rot, which have created a safety issue for the center. “We just have to add gravel.”

The facility serves approximately 3,000 county residents every day, according to officials.

The county will divert waste drop-offs to the its main facility, located at 1448 Lakeside Drive, in East Franklin, which will be open extended hours–7 a.m. to 7 p.m. daily. The county operates a total of 11 solid waste recycling sites.

“This center is approximately 3.6 miles from the Highlands Road Center, and is on the same road,” said Stahl. “The name changes as the Highlands Road crosses East Main Street and becomes Lakeside Drive.  Brochures with a map and directions are being handed out at the Center. We did have a sign up, but it was stolen the first night.”

Stahl added that there will be extra staff on duty at the East Franklin location during the closure, to assist with traffic control.

But the added traffic into town is seen as an inconvenience by some Highlands Road locals.

“It’s going to impact a lot of people,” said Lynn Wyman, 48, of nearby Saunders Road. “They say it’s only a couple thousand residents that [the closure] will impact, but we’re not considering all our guests, the folks from Highlands, tourists. I hope they figure this out before the fall. I really have to go out of my way now just to throw away some trash.”

Twenty-nine year-old Mellisa Puckett, who lives just a mile east of the Cullasaja center, echoed Wyman, but finds the county’s notice of the closure adequate.

“I’m just glad we live in a county that cares enough to make recycling a priority,” she said. “Yeah, it’s a couple of extra miles … but it’s a small price to pay. I just hope they get it fixed soon.”

As of press time, Stahl has yet to confirm the cost of the repairs, however he did indicate that they were less than that of the official bid.

Back in 2010-11, the county and its municipalities managed approximately 36,332.16 tons of waste, nearly 30,000 of which were disposed of in area landfills. Roughly half of that waste was produced by county residents.

This data was compiled back in 2012, for a 10-year plan by the county for its recycling program. At the time, it had taken into account the nation’s recent drop in housing rates–a market downturn which impacted all facets of county planning, including solid waste. According to Stahl, these plans were removed from county law a few short years afterward, although such data was important enough to be included into the county’s annual report.

“The plan became more of a hindrance over time, because changes had to be re-approved by the county and both towns [Franklin and Highlands],” he said. “Thus, programs were delaying new initiatives until the next update.”

Macon County has operated a recycling program since as early as 1992. The Highlands Road facility was purchased back in 1987 for $3,000.