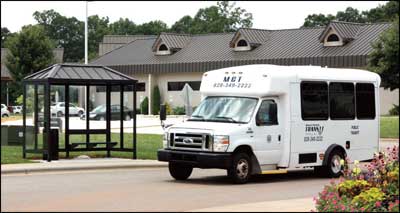 The mission of Macon County Transit is to provide transportation services in an efficient, coordinated, cost effective manner that is responsive to the current needs of the residents of Macon County. In April, Macon County’s Transit’s primary route, the Mountain Gem Route, experienced record ridership for the month.

“The Mountain Gem, the route that runs in town, had record ridership during April,” said Macon County Transit Director Kim Angel. ”From July through March, the average ridership was just over 1,000 boardings per month.  In April, there were 2,405 boardings for the month.  We attribute the increase in ridership to the hikers that were in the area.”

A survey conducted by the Franklin Appalachian Trail Community Committee in 2016 showed that transportation was the most common area suggested for needing improvement by more than 200 hikers who were surveyed. The majority of the hikers who made their way to Franklin did so utilizing shuttles offered by lodging facilities. Macon County Transit was also commonly used by hikers, as well as a large number of hikers getting rides from local residents to and from the trail. While hikers suggested more transportation to get to town, they suggested that transportation such as taxi services or a bicycle rental option might be made available for hikers who spend several days in Franklin.

In 2017, Macon County Transit worked to advertise the county service with hikers, and based on April ridership numbers, the efforts seem successful. In 2017, Macon County Transit served 994 hikers and drove 9,935 miles for the program at a cost of $14,945.37. In 2017, the hiker shuttle service was reduced in terms of how long it operated, to more specifically target the peak season that hikers were in Franklin. The reduction of days lowered the programs cost to $13,197.39 and was still able to serve 955 passengers who traveled 8,092 miles.