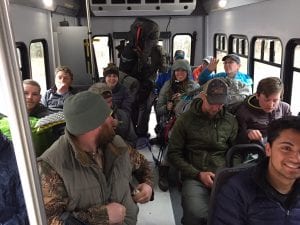 A record number of Appalachian Trail thru-hikers traveled through the Great Smoky Mountains National Park in 2017, a trend seen all along the entire 2,200 miles of trail. Extending between Springer Mountain in Georgia and Mount Katahdin in Maine, the Appalachian Trail crosses through Macon County and brings hundreds — if not thousands — of hikers into Franklin each year.

Despite frigid temperatures this week, hikers have already started to funnel into Macon County, with a full load of hikers being bused into town last week. Nantahala Hiking Trail volunteer Bill Van Horn reported that eight thru-hikers boarded a bus at Rock Gap and were joined by seven more hikers at Winding Stair Gap last Wednesday, all heading into Franklin to refuel and rest before heading back onto the trail.

“For 2017 in terms of thru-hikers we saw the most thru-hikers come through the park on record,” backcountry management specialist Christine Hoyer said. “2015, 2016, 2017 – each year is the new record.”

Hoyer says around 4,400 hikers passed through the park in 2017. Combined with other backpackers staying at campsites and shelters, visitors spent the night at backcountry facilities more than 104,000 times in 2017.

Appalachian Trail Hikers mean big business for Macon County and Franklin. From specialty outdoor businesses such as Three Eagles Outfitters and Outdoor 76 to hostels such as Gooder Grove, businesses in Franklin specifically cater to the hiking market. The Franklin Appalachian Trail Community Committee works to provide opportunities and expanding services to hikers visiting town. Van Horn said that the FATCC has five major events scheduled for the 2018 Celebration Period (www.discoverfranklinnc.com/at110).  The Nantahala Hiking Club (NHC) will be replacing the privy at Standing Indian Shelter as soon as weather allows, to provide a safer, drier stopping place for hikers in the county.

“The United States Forest Service just gave us permission to improve the camping area at Betty Creek Gap and add spots for 20 tents,” said Van Horn. “NHC is planning a fundraiser (March 24 -April 28) with the goal to raise $5,000 of the $18,000 to replace the 50-plus-year-old Rock Gap Shelter.”

Donations can be made for the project by sending them to NHC, 173 Carl Slagle Road, Franklin, NC 28734.

The First Baptist Church of Franklin, 69 Iotla Street, will once again provide a free hiker breakfast to A.T. hikers beginning March 14 and will continue through April 14 at 7:15.  For more information call (828)369-9559.

Snow arrested in Florida; now in custody in Macon County

Town hires its own engineer