For just a year shy of a century, Rickman General Store has thrived in the Cowee-West Mill area, now considered a National Historic District. When merchant Thomas Rickman died in 1994, after operating the store since 1925, it floundered somewhat – until Mainspring Conservation Trust purchased it in 2007 for $225,000 so that it could enjoy new life as a “community gathering place,” said Mainspring’s executive director, Sharon Taylor. 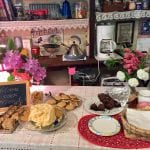 Rickman Store opened May 4 for its season, which runs through December. Friends of Rickman Store, a group of dedicated volunteers, hosts each Saturday (until the second Saturday in December) an open house and old-time jam session from 10 a.m. until 4 p.m. A table full of savory and sweet treats are offered to visitors, as well as a chance to view vintage items and furnishings from when the store was in operation. Plus, works by local artisans, photographers, writers, quilters, and more are available to purchase. (All the money collected from sales and donations help maintain the property.)

“It’s so important to conserve the area’s cultural heritage,” said Taylor. “And Rickman Store has worked.”

Taylor said maintenance and upkeep costs on the 124-year-old structure is also offset by the rental of an apartment over the store that was once the home of the Rickman family.

“Tom Rickman and his wife raised their children there and went up and down those stairs to work in the store,” she said.

Thomas Rickman was born on Rickman Creek Road in the Cowee community in 1901 to Roland Riley Rickman and Arba Zena Leatherman. Thomas was one of 12 children.

Thomas married Fannie Alva Holbrook in 1926, one year after purchasing what was previously the John Hall Store owned by W.H. Bryson. The couple had two children, Zena Pearl (Brogden), and James Roy, who owned and operated Auto Parts and Equipment in Franklin until his death in 1990.

Zena Pearl, now 92, wrote some of the family history in the

1987-published “The Heritage of Macon County,” of which there are two volumes at Macon County Historical Museum. She shared that her father attended Cowee School, before it became Cowee School Arts & Heritage Center, and traveled by wagon to acquire an education in Sylva at the Collegiate Institute.

Zena Pearl, who taught at Cowee School and still lives near there, recorded that when her father was courting her mother, “She wrote notes to him on the shells of the eggs that were sent to the store by her mother (who became Zena’s grandmother). Several dozen eggs later, they were married.”

The Rickman family first used curtains to section off “rooms” in the apartment over the store. Eventually, wooden partitions were added. Zena Pearl, who recently attended  the 12th re-opening on May 4, said she was “born upstairs and married upstairs.”

The store stocked necessary items, but Rickman also operated a grist mill for about 20 years. His wife, Fannie, assisted at the store and sometimes managed it, especially when Thomas became involved in the operation of an apple orchard.

Zena Pearl, who was married for 62 years to her husband, Ed who died in 2009, remembers helping at the store when her father was busy in the orchard or delivering mica and wood to customers. Once, when she was around 10 years old, a customer brought three chickens, tied together by the legs, into the store for weighing and credit. She told him to put them in a spot under the counter because she was afraid of chickens. She forgot about the chickens and, during the night, they made a mess, including knocking over and breaking some Coke bottles. “It was the only time I got spanked,” she said, “because my daddy wanted me to help with those chickens and he didn’t know I was scared of them. He told me later he was sorry he ever spanked me.”

A happier memory was receiving a nickel on Saturdays if she did not “whine for” candy during the week. She could purchase for five cents 25 Hershey kisses, her favorite. “People often came in for just a drink and a pack of crackers or some candy,” she said.

Zena Pearl has seen the dynamics of the area change from horse-drawn wagons to automobiles – from Sears & Roebuck catalog orders to a Super Wal-Mart. But she said “seeing the store being used in this way is wonderful.” She often tells visitors, “My father is dancing in heaven.”

“I became involved with the store in 2006 … The possibility of its purchase was initially a dream, but it became the topic of conversation among many neighbors and friends. On Sept. 16, 2017, we re-opened the store to the community to celebrate and began a series of open houses to discuss the best uses of the building. We became known as the Friends of the Rickman Store.”

She explained that she is not the only one committed to the site’s future.

“Our volunteers feel strongly about preserving this wonderful Cowee treasure and we encourage the community to help in keeping this historic building by becoming supporters and volunteers.”

For sale are a myriad of hand-made crafts, such as wood items by one of Zena Pearl’s two sons, Mack Brogden, as well as pottery by Doug Hubbs, who sometimes gives demonstrations at Rickman Store.

One of Mack Brogden’s favorite memories as a boy involved “the old black stove,” which still exists at Rickman Store.

“On rainy and snowy days, seeing 25 to 30 men piled up around that wood stove talking about everything …. And I loved eating fried baloney cooked on that wood stove.”

Carlson, an ESL (English as a Second Language) teacher at Mountain View Intermediate School, met Thomas Rickman in 1987 soon after arriving in Macon County from her native Peru to meet future in-laws. “He was such a kind, welcoming person,” she said.

Others in the community remember Rickman that way.

“He never sold anything on Sunday, the Lord’s Day,” said Zena Pearl, “but during the blizzard of ’43, when people couldn’t get anything, he opened the store to people needing supplies. And if someone wanted to buy gas, he told them he wouldn’t sell it on Sunday, but he would give them some if they needed it to get home.”

Carlson recalls him telling her about his first customer on March 3, 1925.

“Eva Bryson came to the store for a spool of thread and bartered for it with three eggs. He was so proud of that transaction that he kept in a display a picture of Ms. Bryson next to a small basket with three eggs. That display is still in the store and when time came to select a logo for the Friends of the Rickman Store, we all agreed to continue sharing that story. You will find the three eggs and the spool of thread on our aprons, t-shirts, pamphlets, and labels.”

Carlson has served as an unofficial Rickman Store historian. A slide show of the store’s history since 2007 plays on a computer in the stone-works cellar room, where apples and items such as milk and eggs were stored, and she has compiled newspaper clippings, flyers, and newsletters into several notebooks. In the store are also framed histories and family photographs.

She said she feel very much a part of the Rickman family, and believes she honors them with her service to the store’s present purpose.

Town rolls over TDA surplus to 2021