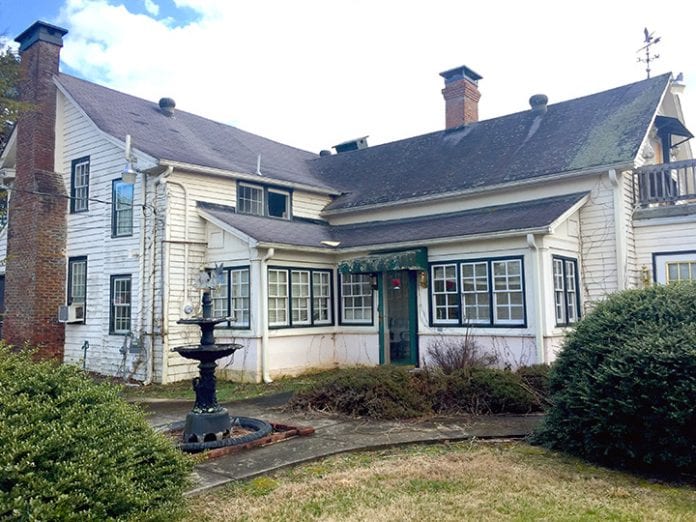 For more than a decade, the Addington home has sat – unoccupied. Yet, for almost two centuries, the home and the land that surrounds it was a center of activity not just for the Addington family, but also for generations of Macon County residents.

A 1980 published Macon County Historical Society Architectural Survey Form listed the home, which is located six miles south of downtown Franklin on the old US Highway 441 ( now Addington Bridge Road), as “one of the oldest in the county.” The original dwelling was a chestnut log structure. Chestnut trees, once a sustainable, sturdy construction resource in the area, were wiped out in the early part of the 20th century due to a fungus, referred to as chestnut blight.

That original 1822-built log structure still exists, but has been absorbed by various additions over the years. Currently, the home, by all outward appearances, is a two-story frame design with gable-end chimneys of Flemish-bond brick construction. It has a wide, enclosed front porch and a mudroom/side entrance porch.

Inside is evidence of decades of various interior trends: rustic, farmhouse, Victorian, 1960s, and more. The chestnut logs, some with bark still intact, can be seen from rooms both upstairs and downstairs.

Although all that remains of the property, currently unoccupied and for sale, are three-plus acres, Addington farm once bustled with foot, horse, and eventually automobile traffic from all corners of the county due to its vast land holdings, working dairy, and grain mill.

Said Frank Moffitt, realtor for the property, “Mrs. Addington couldn’t get much done sometimes because people coming to the mill or the dairy stopped to talk.”

Henry Addington, second son of Revolutionary War soldier William Addington, moved in the early 1820s from Buncombe County to Macon County to establish the home near Skeenah Creek. He began amassing vast land holdings over the next several years. Much of the land formerly belonged to the Cherokee. Henry’s wife, Mary, had cedar trees planted which are still in the front yard. Whether they are originals or offspring of originals is not entirely known.

Documents at the Macon County Historical Museum show that in the 1830s Henry purchased five slaves to work on the property. Addington’s slaves, as well as various Addington family members throughout the generations, are buried in the same graveyard (currently just to the left of Prentiss Church’s driveway) on a hill overlooking the home.

Six children were born to Henry and Mary. When Mary died in 1859, Henry divided among four sons his extensive estate, which included land in Union County, Ga., proceeds of the sale of timberlands in Nantahala, the Macon County farm, 13 slaves, and furnishings. Son James B. (Jim) Addington received the home and several hundred acres, and Henry continued to live with his son until his death in 1878. He is buried, along with Mary, in the Addington cemetery.

It was Jim who had the mill built in 1861 (which was also the year the Civil War began). His conversation with the mill builder, Tom Vanhook,  reportedly went like this: 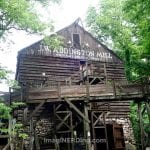 “Be over tomorrow.” And the deal was closed.

Water was directed from nearby Skeenah Creek to power the mill, which provided residents a place to grind wheat and corn. According to the Architectural Survey Form, “The mill received the water, which turned its wheel from a race leading from a small impoundment near the junction of the creeks.”

Where the house sits, the mill was visible beyond the small yard, past the decorative iron fence, and across the old highway.

Jim passed the farm and mill to son Jake, who operated the farm from 1907 and into the 1950s. Jake’s dairy was considered “one of the two sources of milk for the town of Franklin,” cites the Survey Form, which also included in the 1980 report: “Many Franklin people still remember the rich Jersey milk which this friendly, dignified man delivered in the afternoon after delivering mail in the morning.”

After the 1950s, the home was still owned by Addington heirs for a time, but it was eventually sold.

Moffitt, who was born and raised in Macon County, says different members of his family worked for the Addingtons “as did just about everyone in that community at one time.”

Years ago, Moffitt found one of the Addington’s daily work journals, which includes entries from 1894 until 1900. In it are penciled work notes regarding employees, purchased items and services, as well as sales of goods. Some interesting notations include:

The mill was purchased by Ed McNish in 1958; he then sold it to someone who dismantled the mill, shipped it to Sandusky, Ohio, and reconstructed it to become the J.W. Addington Grist Mill at Cedar Point. The mill is a part of Cedar Point’s Frontier Trail, a theme-style park that opened in 1971. Cedar Point Amusement Land documented in 1973: “The Addington Mill features an overshot wheel. That is to say that it derives its power from water passing over the top of the 14-foot waterwheel, which causes it to turn. The waterwheel in turn causes another huge wheel called the crown wheel, or pit wheel, on the same shaft, and inside the building, to turn. The teeth of the crown wheel mesh with the wallflower gears on either side and turn the stone nuts. These stone nuts drive the corn and wheat millstones on the floor above.”

At some point after the mill was moved from the Addington property, a small replica of the mill was built and still exists on the property.

According to Moffitt, the home has changed hands for the last 40 years, with most of the land sold, including acreage acquired by Macon County Schools for the building of South Macon Elementary School. Then, about 20 years ago, the intention was for the home to become a bed and breakfast. Although current owner Patricia Robinet’s husband, Jerry, died before that idea completely came to fruition, the couple planned for the multi-fireplace, multi-room house – overlooking a pond, three acres, and the replica mill – to be a place where locals and out-of-towners alike could experience a piece of history. The couple made many improvements to the property, said Moffitt, but Robinet has not been able to live there alone and has had the Addington place on the market.

Moffitt points out that even though “the place was something back in the day,” it could still offer someone a unique residential and historical experience.

A trio of quinces pretty enough to eat