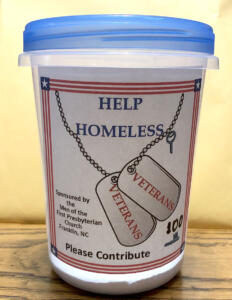 The Franklin community has focused on the needs of the area’s homeless veterans for the last four years. Officially known as Help Homeless Veterans Week, Sept. 4-10 this year reminds citizens of opportunities to support veterans.

“We’ve been raising money to help homeless veterans (through festival booths) since 2014,” said Kraft, current president of the church’s men’s group. “Since 2014, we’ve raised over $50,000. Only $.02 is used for administration costs, with the other $.98 going to help veterans. We send the money to Asheville Buncombe Community Christian Ministry, which covers all of Western North Carolina counties. They are in their 51st year of operation and they can house homeless veterans for over a year. They also work to provide housing and job training. A large commercial kitchen is for training in culinary jobs, and another training opportunity is as a tractor trailer driver. After five years, veterans who go through these programs are reportedly still working.”

Kraft, who is not a veteran but has served as a volunteer in various capacities, indicated homelessness has been an issue due to “the difficulty of veterans coming back from being deployed and trying to assimilate back into regular life.” Of the more than 600,000 veterans in North Carolina, approximately 1,000 regularly experience some form of homelessness, according to Census Bureau statistics.

“Monies collected during Homeless Veterans Week are not just for homeless veterans,” he said. “It’s for all veterans in need – to pay a utility bill, to get them to a physician, and more.”

The annual effort is approved by the Town of Franklin council, which issues a proclamation for the September Help Homeless Veteran Week signed by Mayor Jack Horton. The proclamation encourages citizens to participate.

Heightened attention paid to schooling at home and homeschooling