While there may have been more outward signs of slavery from the 1600s to 1865, enslavement in the 21st century exists in dark alleyways, inside seemingly reputable businesses and homes, and within the confines of the internet.

“I was shocked,” said Abigail Christmas-Hill, sharing about her first glimpse into human trafficking/sexual exploitation. The now 32-year-old mother of small children was a 21-year-old Chick-Fil-A manager when she heard a talk on the issue that Fortune magazine in April dubbed an American “epidemic.” Historically, slaves may have been paraded, bought, and sold in town squares, but in modernity children and young women and men – pointed out Christmas-Hill – are daily lured away, held captive, and exploited.

“I felt like I was being held to the chair during that talk,” said Christmas-Hill, “because I was supposed to hear it. I left there and started doing research and it just broke my heart. It’s a problem that’s right in our backyards.”

Christmas-Hill, a native of Atlanta, Ga., who is a seasonal resident of the Rose Creek community with her author husband Roger Hill and her children, became for nine years an active volunteer for various organizations and eventually joined Out of Darkness full-time.

“I wanted to be on the front lines and involved in an organization that takes a holistic approach.”

Christmas-Hill explained that the main intent of Out of Darkness is to reach, rescue, and restore. Trained volunteers participate in what is called “Princess Night” to hand out roses and handwritten cards of encouragement, scripture, and information to known and suspected prostitutes; answer calls on the hotline; manage the safe house; mentor victims; and more. Paid counselors and case workers are also on staff.

Sexually exploited victims who reach out for help through hotlines and other means and desire to be rescued are taken to a safe house, where they can stay for up to 30 days, rest, learn life skills, and begin the restoration process. From there they are given a choice of three, long-term (12- to 18-month) live-in programs so they can learn to live life free of their former bondage and shame. “It’s at one of these facilities that the counselors go in-depth with them and they truly have a chance to heal,” said Christmas-Hill.

The recidivism rate is high, however. Most trafficked victims have Stockholm Syndrome, defined as “feelings of trust or affection felt in many cases of kidnapping or hostage-taking by a victim toward a captor.” Bondage to sexual exploitation is often what a victim comes to know, and traffickers are skilled manipulators.

“Social media is the worst,” said Christmas-Hill. “There’s something called ‘boyfriending,’ where a male will target a female and patiently court her. There was one girl I knew who had been on several dates with a guy and one night he pulled over and forced her out and told her he would pick her up after she made $1,000. He threatened her by telling her he knew where her young children were.”

In the North Carolina General Statutes in Chapter 14, Article 10A, human trafficking is defined by “coercion, deception, involuntary servitude, minor status, and sexual servitude.” Reported cases in Macon County are rare, but one was included in a patch.com report titled “NC Child Sex Exploitation Ring Bust Nabs 76 Arrests, 13 Rescues” that included: “A 36-year-old man Macon County man was accused of hands-on sexual offenses against up to five children in crimes that allegedly occurred in North Carolina as well as other states.”

Former Franklin resident Camila Wright Zolfaghari said, “Human trafficking happens in every type of community, but people often expect it to look like it looks in the movies rather than what it looks like in real life, so it often goes undetected.”

Zolfaghari was born at Angel Medical Center and raised in Franklin, and she became a prosecutor first in Jackson County and then head of the human trafficking unit at the Fulton County District Attorney’s office in Atlanta, Ga. Eventually she moved to the Georgia Attorney General’s Office, where she became the first prosecutor charged with prosecuting human trafficking at the state level in Georgia.

“After years of prosecuting and working with law enforcement, I moved into the nonprofit sector and am working with Street Grace, because of their focus on preventing human trafficking from happening in first place,” she said.

Roger Hill, author of the recently released book, “Dog Company,” met Abigail during a Princess Night when he volunteered to be a driver for volunteers conducting outreach for victims of sexual exploitation in downtown Atlanta. He shared that at the time, Jesus had healed him from an intense addiction to pornography. His goal in becoming involved with Out of Darkness was “to fight against the injustices suffered by sexually exploited people for which I had indirectly participated.”

“It’s a slippery slope,” said Hill. “Pornography is one arm of the monster that can easily and quickly lead to one patronizing strip clubs, massage parlors, escort services, and more. And traffickers are so nefarious, charming, and creative. This underbelly must also be eradicated in order to truly cut off the demand for human trafficking and the sex exploitation industry.”

Christmas-Hill said it behooves teachers, business owners, parents – “really everyone” – to spot the “signs” that someone is being held against their will and/or exploited. Fear, fatigue, and agitation are often exhibited by someone who is being trafficked. Also, a victim may not be able to look someone in the eyes.

“Mostly, if it doesn’t seem right, it probably isn’t right. One of our volunteers was in a store and she saw a younger female with an older male and the volunteer saw the signs,” relayed Christmas-Hill. “When the female went outside without the male, while he continued shopping, the volunteer introduced herself and asked if she was being trafficked against her will. The answer was yes, and then the volunteer asked if she wanted to be rescued, and the answer again was yes. So she was rescued.”

Education and training key to prevention

Zolfaghari said there is much that citizens of her hometown of Franklin, as well as in Macon County – everywhere – can do to become vigilant regarding human trafficking. The organization Street Grace, with which she is involved, focuses on education and training. She suggested citizens:

– schedule training for the community or church to learn both the red flag signs for trafficking and how to protect the children in the community;

– become educated – Street Grace (https://www.streetgrace.org/resources/) and other organizations have resources about red flags and protecting children;

– be very involved in the lives of children (for example, know their friends in person and online);

– volunteer with an organization that serves trafficked victims (contact REACH of Macon County, for example);

Christmas-Hill said Out of Darkness (https://atldreamcenter.com/outofdarkness/) also educates regarding how to become aware of tell-tale sexual exploitation signs.

She also warned that because social media plays such a significant role in traffickers’ ability to lure children, especially teenagers, parents need to “do research to know about various social media sites, don’t trust all social media platforms because some have titles that seem harmless, and caution children never to tag the location of where they are eating, shopping, living, hanging out, and doing sports.” Parents, she insisted, must be vigilant and continue ongoing conversations with children about what is okay and not okay to share, say, and post on social media. “Traffickers are expert profilers and can find children who are most vulnerable,” she asserted.

“Ten years ago, when I started prosecuting human trafficking in Atlanta, most of our cases involved a victim who had already run from an abusive home before she met her trafficker,” said Zolfaghari. “In my last years of prosecuting, nearly every single one of our victims met her trafficker online while she was home. Traffickers now sit online and send messages to hundreds of girls, waiting to catch the one who believes their lies of love, fame, or fortune.”

Hill conveyed that parents, teachers, coaches, youth pastors, etc. should not leave boys out of warning talks concerning traffickers. He shared a quote from a court-appointed special advocate interviewed in April:  “I think even when we think about human trafficking, we think about young girls in our mind’s eye. But we know boys are also trafficked. Anywhere from 25 to 50 percent of trafficking victims are male.” Unfortunately, there are currently fewer resources for male victims.

Because of her convictions, Christmas-Hill became involved as a consultant in a 2016 feature movie (available on such streaming services as Amazon and Netflix) called “Priceless.” Director Ben Smallbone contacted her and asked her to evaluate the script for authenticity, which she did. She told him he would have to go on a Princess Night before she approved anything. He did.

The movie stars one of Smallbone’s brothers, Joel Smallbone, from the Grammy-winning Christian-crossover band For King & Country. The movie is a suspenseful, multi-faceted love story that delves into the issue of human trafficking. During shooting in Albuquerque, N.M., Christmas-Hill was asked to visit the set for a week to ensure authentic depictions of trafficking.

“I had been asked to read other scripts, but none have been completely accurate and some are dishonoring to those who are trafficked,” she said. “Ben and I had some long conversations about the script and he allowed me to offer some modifications. I am beyond pleased with how the film turned out.”

Although Christmas-Hill is currently taking a break from what she calls “a beast so large,” so that she can concentrate on motherhood, her focus will always be on the victims of sexual bondage and exploitation. She and her husband desire, “to raise our children as justice fighters.”

“Abigail is focused on doing that which can best prevent sex exploitation,” said Hill, “and that is showing our children they are loved and cherished; she is pouring into their identities so that they won’t be susceptible to those with nefarious intentions later in life. I’m so proud of her. Abi is someone who truly practices what she has preached and shared with countless audiences.”

The couple stresses that everyone should have the National Human Trafficking Hotline in their phones for quick access in case any number of suspicious scenarios might be evident at area stores, schools or parking lots. The number is 1-888-373-7888. If not able to speak to someone, callers can text 233733 or HELP or INFO. 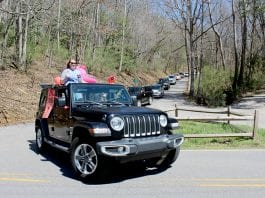 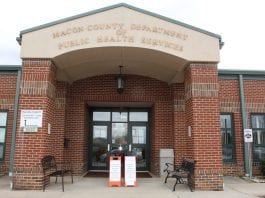