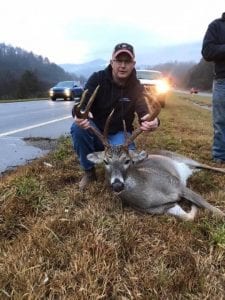 Darrell Mason choked up when he talked about the buck.

He was standing between the counter and the cigarette and chewing tobacco rack at his Car City gas station on Sylva Road. He looked somewhere down and away as he spoke. The cursive letters “Car City Gas & Oil Co.” sewn in white thread onto his denim button up shirt and the bright orange University of Tennessee “T” on the mast of his ball cap were entirely too joyous for this conversation.

It happened Friday. The eight-point buck was in rut, unaware of potential danger and chased a doe into the four-lane highway. The doe got away, and the biggest buck Macon County has seen in recent memory was dead on the roadside, hunted by no one.

“It was a beautiful deer and a testament to the kind of deer we have here in North Carolina,” said Bill Fuchs, co-owner of Wilderness Taxidermy on Highlands Road.

“We haven’t had deer very long,” he explained, describing how deer had been hunted out of the area in the ‘30s and ‘40s and reintroduced in the 1970s. “Being a new harvest there hasn’t been a lot of inbreeding and stunting of the horns.”

A lot has been written about the factors that contribute to the deer’s mating season, when bucks become more active and less vigilant, but Fuchs assessed with confidence: “The rut is in full swing right now.”

His wife Linda also saw the deer in the meadow along the roadside. “He was huge!”

“We’re starting to get some really fine deer in Macon County, who knows how,” she pondered. “Stronger conservation and the forage they eat.”

The buck was special to Mason. He lives on the hill behind his gas station and would watch it in the meadow. He fed it. He spotted him on his wildlife camera. Roadkill is not how he should have gone.

“He was a friend of mine,” he said. “He was just servicing these does. I just hate to see him killed that way.”

Mason could’ve killed the buck himself but prefers not to shoot any animals up by the house.

“The challenge is getting in the woods, outsmarting the deer, get your scent down and if he gets away, he outsmarted you,” he said. “There is no sportsmanship in getting one standing in the yard.”

The buck should’ve been hunted properly, and Mason had hoped a neighbor’s daughter would have had that opportunity. He suspected hunters leasing the property across the highway had also been watching the estimated 190-pound animal on video feeds. Bill Fuchs estimated the animal’s Boone and Crockett score would have been in the 140 to 150 range. Boone and Crockett is a scoring system that measures various aspects of the antlers of a trophy buck.

Gary McMahan spotted the trophy buck roadkill from his truck and pulled over to take a photograph with it. The photograph has been circulating on social media ever since. Where the buck was taken later could not be immediately determined.

“All I got was heartbreak,” said Mason. “But it was a good deer.”

WNC ideal for growing and foraging for mushrooms