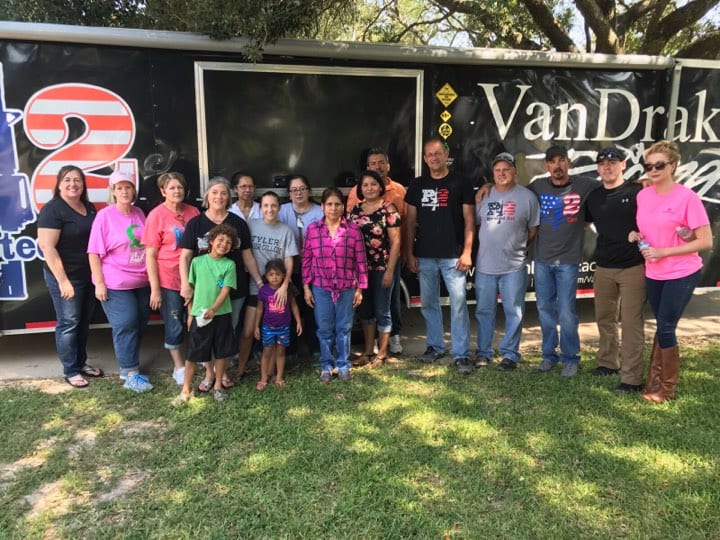 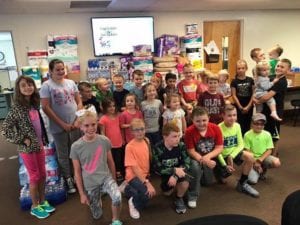 Before Hurricane Irma, Hurricane Harvey was the largest hurricane on record. The storm dumped more than 50 inches of rain on Texas, dumping feet of rain in some areas causing them to receive more rainfall in an hour than they typically see the entire month of August. Despite the storm impacting an area 900 miles away, Macon County residents, along with people around the country, wanted to do something, anything to help.

“I just had a thought about it last Thursday,” said Kevin McCall, who was one of a group that collected hundreds of supplies for victims of Hurricane Harvey. I called Mike [Gibson] and went home and researched smaller towns outside of Houston. I made a phone call to Chambers County Emergency Management and asked them about their situation and what they needed.”

McCall said that within 30 minutes of coming up with the idea, he called Mike back, posted the idea on Facebook, and the offers for donations and help began to pour in.

More than 300 people were rescued by the Chambers County Sheriff’s Office, Cove Volunteer Fire Department and Trinity Bay EMS in the first hours of the storm hitting the Texas county. 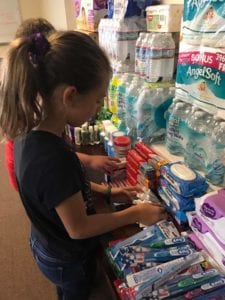 Josh Drake and Ben Vanhook with VanDrake Racing to haul supplies the 900 miles to Chambers County.

“Ben Kopsezcki jumped in to help with drop-offs and load the trailer,” said McCall. “My family, Mike’s family, Farm Bureau Insurance, but most of all,  just local people from Franklin made all the donations possible.”

The Macon County Sheriff’s Office launched “Operation Cops’ Kids for Texas” and collected diapers, water, pet food, and a mountain of other items to send with McCall and the team to Texas.

“’Operation Cops’ Kids for Texas'” was in response to the hurricane and all our kids witnessing the aftermath on the news,” said Macon County Sheriff Robert Holland. “As many children do, they were asking questions and were concerned with what was happening to those poor people in Texas.  We wanted to do something to teach our own children this is what people do when others are hurting and in need.  We knew that a few of my friends and our community were also getting involved in Texas relief efforts so we took advantage helping with those efforts.  During our 72-hour operation the children of the MCSO along with their parents began going to local businesses and together made purchases of nonperishable food items, bottled water, toilet paper, paper towels, tooth brushes, toothpaste, soap, diapers, and many other goods and delivered them to the Sheriff’s Office where we had a pizza party for the MCSO kids.”

McCall, who often teams up with Gibson for community outreach efforts, said that he never had any doubt about being able to reach their goal.

“We knew Macon County would do more than their share,” said McCall. “Our only concern was being able to get all the supplies we received to Texas.”

After the trailer was stocked full, the Macon County Sheriff’s Office gave McCall and the team a police escort to the county line as they headed to Chambers County. More than just escort the team to the county line, Sheriff Holland sent Macon County Sheriff’s Deputy Blake Buchanan, along with Deputy Buchanan’s wife, in his patrol car to make the 1,800 mile round trip to Texas to make sure the donations arrived safely.

“With the support of our county manager and commissioners, one of our officers and his wife escorted the group all the way to their destination in Chamber County Texas and escorted them all the way home,’ said Sheriff Holland. “We wanted to do this to ensure safe travel and delivery and to return home safe as well. While I’m proud of our kids for stepping up and helping those in need, what we did was just a very small part in doing a very big thing for a community in need that until now none of us had ever even heard of before. I am extremely proud of everyone who took part in this relief effort and as those who organized the effort will tell you God was in it and he showed out all of us.  It was a blessing to be a very small part of it.”

McCall said that even visitors just passing through stopped to see what was needed and came back with donations. Businesses like Protected Second, Lowes and Walmart also got on board to help collect donations to send.

“There is no way to keep up with the value of the items donated because it all came in so fast that we could barely keep up with sorting, boxing and labeling it all,” he said. “But if everything cost a dollar, we easily had $150,000 worth of stuff packed into the VanDrake Racing trailer.”

When the team from Macon arrived in Chambers County, they saw water lines three and four feet high on the sides of buildings and homes.

“Cars and campers were washed up against trees and piles of furniture, sheet rock, and carpet were along the roadsides waiting to be hauled off,” said McCall. “Also we found very tired but so humble and grateful people. It was just like talking to people from here at home. We made lifetime friends for sure. It was a long trip down and back, but we knew it was worth it the minute we met those people.”