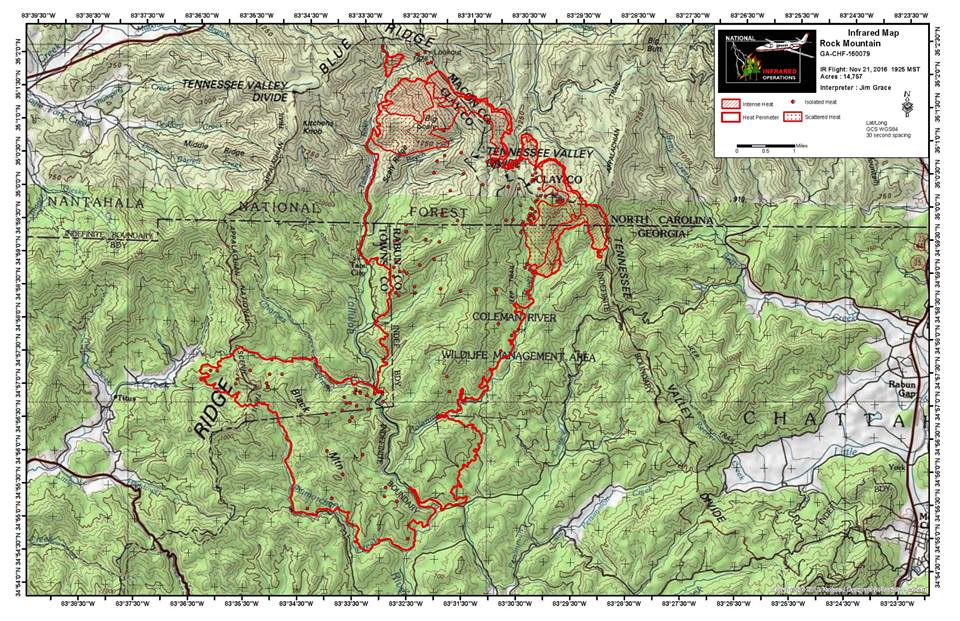 Firefighters have been battling the Rock Mountain blaze in Rabun County, Georgia for the last couple of weeks and the fire has quickly become one of the largest wildfires in the region at 14,757 acres. As of Tuesday morning, the fire was considered 30 percent contained and had 458 personnel from 10 different crews, 23 engines, four water tanks, three dozers, and five helicopters.

Flames from the Rock Mountain Fire were visible Monday night from Patterson Gap, Betty’s Creek, and the Wolffork Road areas, which was the focus for firefighters on Monday.

Officials are planning an informational meeting at Otto Community Building tonight at 6:00 p.m. Because the fire will possibly be affecting the Mulberry Community, Macon residents are encouraged to attend to ask any questions or share any concerns at the meeting.

Throughout the day today, fire crew will continue with structure protection on homes on the fire’s east side. The area extends roughly from Patterson Gap Road and Betty’s Creed Road in Georgia to Pagonia and Beasley Gap in North Carolina. Crews will also continue to patrol and maintain the souther perimeter of the fire and structures in the Tate City area.

Air operations will be active today, with five helicopters and the opportunity to pull additional air resources to support firefighting efforts.

An area closure had been issued for the Nantahala Wilderness area:

To get more information, or to keep up with current conditions, you can simply go to http://inciweb.nwcg.gov/incident. This website can provide numbers and maps on the current Rock Mountain Fire.