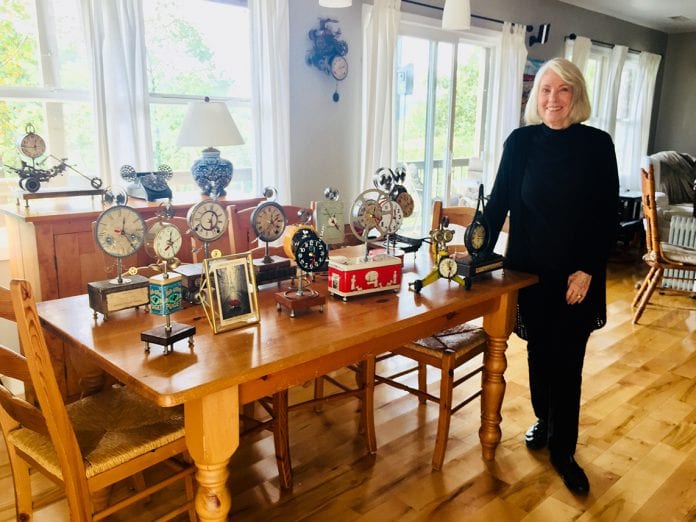 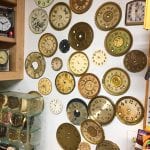 At any given time, Carol Mayer is surrounded by 20 or more wall and table clocks — all set to the exact hour and minute. Mayer is a functional artist, with a focus on clock making. Her clocks are one-of-a-kind whimsical creations made from myriad pieces and parts. In fact, her shop, adjacent to her and her husband’s home in Cowee overlooking the Little Tennessee River, is replete with organized shelves of everything from old film canisters and silver serving pieces to candlesticks and salt and pepper shakers.

“I especially like the old, rusty, well-worn items,” said Mayer, “you know, the things people throw away.” By using them in a clock design, she pointed out that she is giving old pieces “new life.” 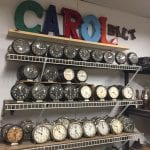 Mayer is not an educated or trained artist. After 30 years working for RCA, eventually promoted to program manager in the design center, Mayer decided it was time to retire – and find creative outlets. She married her childhood sweetheart, Tom Hopkins, in 2002, and asked him, “What am I going to do now?” His response, “Anything you want.” She decided to become a functional artist since she had always been interested in working with her hands.

“Art was just innate in me,” she said. “When I was a single parent raising my son, I did so much building, fixing, and repairing, so creating just came naturally.” 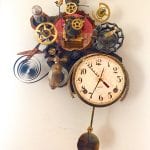 Mayer concentrated first on furniture craftsmanship, making buffets and a bathroom vanity. When a family member, who admired the work of artist Salvador Dali, especially his melting clock images in “The Persistence of Time” oil painting, asked her to make a real-looking melting clock, she rose to the challenge.

“Then other people wanted one. So I made more. Tom began to take them to galleries and they started selling. That’s how I became a clock artist.” She named her venture Carolbilt Creations.

The Florida-based couple happened upon Franklin during an evacuation from Hurricane Wilma in 2005. They immediately fell in love with the area and decided to relocate. Hopkins built his wife a shop, outfitted with saws, drills, a vice, grinder, and more, and by 2006, Mayer began to focus solely on clock art. 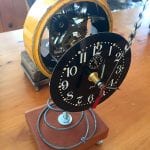 To find items for her clever wall and table clocks, Mayer peruses antique, thrift, and junk shops, and garage, estate, and yard sales. A current line, “Paris Collection,” includes books, tins, scales,  etc. that she picked up during travels to Europe. She said her clocks sort of “design themselves.” She starts off with a foundational item and then tries other pieces, which “audition” for a place on the new clock.

One clock, for example, has as its base and face an old, black, rotary dial telephone. Replacing the ear and mouth-piece ends of the phone’s handset are two kitchen drain strainers. She also makes “exploding” clocks with old gears from 1930s and ’40s clocks. “They look like the parts are flying out of the clocks,” she said, pointing out that these are best sellers. 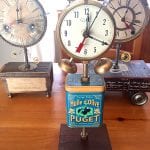 Some of her clock bases are old books. When she found hand-written notes in a 19th century book, she crafted a pocket under the clock base to hold the notes “I like for my clocks to have surprises,” she said. All the clocks also have a delicate feather on the moving time piece, a paw-print ribbon for pulling out the battery, and accurate working parts. Each clock is signed and numbered. She has made more than 1,000 so far.

Her clocks are represented by      Desirant in Asheville, Hamilton Williams Gallery in Morganton, Art on Depot in Waynesville, and Bungalow in Indianapolis, where Mayer and Hopkins grew up. Each gallery carries around a dozen clocks. “They’re so great to work with,” said Mayer. “Gallery owners tell me, ‘no pressure, we’ll take what you have.’ So I work in my shop when I feel like it.”

Locally, the Franklin Health & Fitness Center will feature Mayer’s clocks at some time in the near future.

Mayer will often pass the better part of a day, or an entire day, lost in the creative process. In his own adjacent shop, Hopkins crafts distinct, utilitarian flies as he is an avid fly fisherman and sometimes guide.

“Time flies by,” she said, not intending a pun. “I often go into my shop early and come out of it late.”

Most important to Mayer is the joy her clocks bring to customers. Three grace the newly renovated home that serves as offices for Noah’s Ark Companion Animal Hospital. But some are keepers for her and her husband.

“He won’t let me sell the one on our wall.” It features gears, handles, a faucet, and a small propeller. She names all her clocks and named this one “Propeller.”

Although she never imagined herself as an artist, Mayer “loves” this chapter of her life and said her next creative outlet may be painting. But for now her clock ideas keep coming.

“I’m going to make them until the ideas dry up.”

Fate of rural hospitals more uncertain than ever