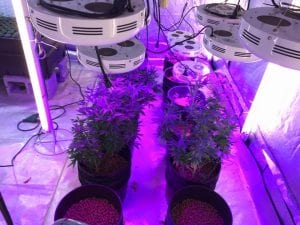 Both Macon and Jackson County Sheriff’s Departments wrapped up extensive undercover operations last week that resulted in large quantities of drugs being seized.

On Thursday, the Macon County Sheriff’s Department, along with the State Bureau of Investigation (SBI), executed a search warrant at a residence in the Holly Springs area of Macon County. As they were making entry into the residence, Sheriff’s Tactical Team were confronted by a male subject, later identified as Richard Alfonse Davidek, with a loaded shotgun. Davidek immediately surrendered and dropped his weapon when the Tactical Team identified themselves. A female suspect inside the residence, later identified as Christa Lee Chambers, was also detained. Once all buildings were secured, investigators began searching the premises and located a large scale indoor marijuana grow.

According to statement from the department, there were at least two rooms in a building located next to the suspect’s residence where a large crop of marijuana was being grown. Inside the suspect’s residence, Investigators located multiple pounds of marijuana that had already been processed. Anonymous tips and letters over the past several months led investigators to initiate their investigation which has lasted several months. The tips from the public provided some of the initial information.

”I appreciate the hard work and dedication that everyone has put into this investigation,” 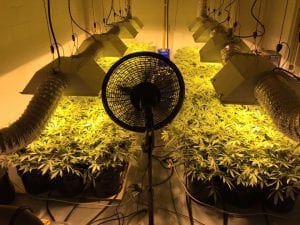 said Macon County Sheriff Robert Holland. “We also appreciate the tips from the public who helped in getting this case started. This case should serve as an example to people that when you give information to law enforcement and you think nothing is being done, that may not be the case. Having suspicion of drug activity is one thing but getting enough to act on sometimes takes time.”

In Jackson County on Friday, deputies with the Sheriff’s Department teamed up with the SBI executed a search warrant on a home and building located at Blueberry Place in Sylva.  During the service of the search warrants, an active clandestine methamphetamine laboratory was found in operation.

Authorities remained on scene throughout the day Friday, and while charges are pending a full investigation, four individuals residing at the Blueberry Place residents were taken into custody.