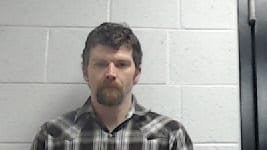 The Jackson County Sheriff’s Office arrested David Christian Griffith, 39 of Cashiers, on Tuesday, Jan. 23, for a slew of charges including breaking and entering, felony conspiracy, attempted larceny, resisting a public officer, and damage to personal property. Andrew Parker made the arrest and Griffith was booked into the Jackson County Detention Center on a $100,000 bond.

After the arrest, JCSO transported Griffith from the detention center for a medical evaluation at which point Griffith attempted to escape custody.

“After his arrest and during his detainment here, he attempted to run in our secure parking lot while his legs were ironed and cuffed,” said Jackson County Sheriff’s officer Major Shannon Queen. “He had been out of the jail for a medical evaluation and when he returned he tried to run.  He was quickly apprehended but never left the secure area.  But the charges are the same as breaking out of the jail once someone is in custody versus resisting during an arrest for suspect during the initial arresting process.”

An attempt to steal copper interferes with county’s 911 system