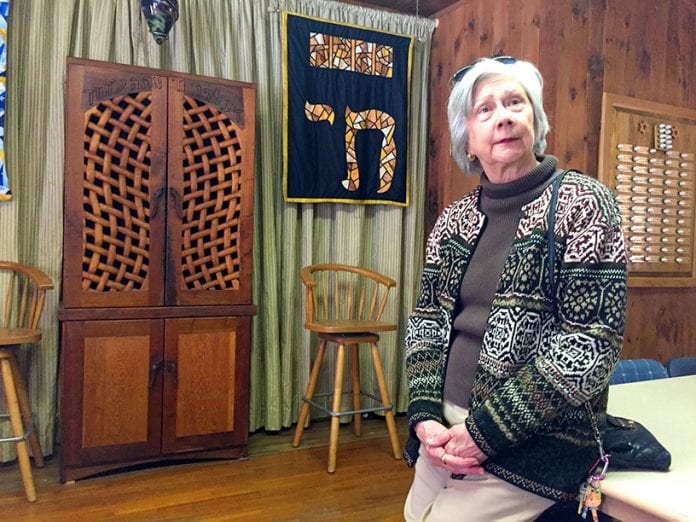 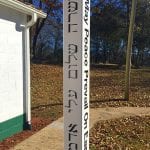 After the Pittsburgh synagogue shooting that left 11 dead, Franklin resident Phyllis Cardoza, 81, started receiving compliments on the Star of David pendant she wears prominently. Others in Macon County’s Jewish community concealed their faith from their neighbors.

Cardoza moved to Franklin from California 12 years ago after her husband died. The gold star of David is encrusted with her wedding diamond. Actually, the diamond was first a part of her father’s bar mitzvah ring. After her husband passed away, Cardoza didn’t want the ring to gather dust in a drawer. So, she had a jeweler in Santa Cruz fit the diamond to a symbol of her faith.

“I wear a Star of David clearly because Christians wear their crosses,” she said. In the week after the Tree of Life Synagogue shooting on Oct. 27, local community members took notice. Several complimented her on the streets of Franklin. “I felt a sort of support for our community after the shooting.”

Cardoza came to Franklin for its peace and tranquility, and she appreciated the community’s acceptance of other faiths. She was surprised to find a Jewish community and started attending the Mountain Synagogue, whose services and location have been shared by word-of-mouth for more than 40 years.

Mountain Synagogue draws 30 to 40 regular attendees, and more than 100 on high holy holidays, traveling from as far away as Sylva, Waynesville and Northern Georgia to attend the only area synagogue.

Recently, board members discussed putting up a sign to proudly indicate where the Mountain Synagogue worships. Following Pittsburgh, others were fearful. They point to hate speech on local community forums like the Facebook page Macon Issues.

“I’ve been trying to get him to put a sign for years,” Cardoza said of synagogue president Joel Edelson. “After the Pittsburgh incident people were saying, ‘Do you still want a sign?’”

A safe community or insurance?

“There are two camps,” said Edelson. With some believing Franklin is a “nice, small town where nothing ever happens. In the other camp, there are those who believe we won’t need security until we need it. It’s like insurance.”

Edelson said that like other congregations and public places, the synagogue’s board takes safety very seriously. A number of security precautions are in place, including cooperation with the Franklin Police Department and Macon County Sheriff’s Office. Further measures are being discussed within the congregation and with other houses of worship through Edelson’s participation in the Macon County Interfaith Coalition, which has held two meetings since the Pittsburgh shooting.

Sgt. Laurie Beegle of the Franklin Police Department has close friends in the congregation. For the past three years she has volunteered off-duty hours to help members of the congregation feel safer when they close their eyes to pray.

“They are wonderful people and I find it absurd that they have to be so afraid,” said Sgt. Beegle, who was raised Christian, but has concealed her beliefs sometimes in the interest of safety.

Things changed after Pittsburgh, she said. Some members of the congregation got more worried. Others felt safer after an interfaith potluck dinner.

“They realized that they have support, and that they were not alone, and that people in the community did care about them,” she said. “Sometimes something different is a world away from them and sometimes it is a shock to them.”

While acknowledging that the vast majority of locals are open to others’ differences, Sgt. Beegle said there are people at both ends of the spectrum. She reflected on the heavy security at Franklin’s Town Hall, a product of a shooting that took place there two decades ago.

“There are even white supremacists here in Macon County,” she added. Nonetheless, she spoke favorably about recent meetings among houses of worship, highlighting the value of leaders of different faiths getting together and publicly showing that they get along.

“Is the extreme here? They are. They’re here,” she said. “You don’t know who the extremist is until it happens.”

Measures to Increase Security for All Faiths

He offered active shooter and church safety training in August that was attended by about 30 community members representing five denominations, a program he intends to revise and expand in 2019.

He encourages all local houses of worship to have armed security.

“Having someone armed to prevent it or stop it quicker,” he explained. “That’s the way it needs to be in the kind of environment we live in.”

Chief Adams said he is not aware of any current threats to Franklin-area houses of worship but encourages congregations to take safety precautions that can save lives.

“Each individual worship center should come up with its own plan,” he said. “It could happen anywhere.”

After the Pittsburgh shooting, Donna and Gary Sinrich received numerous phone calls from friends who knew they were Jewish and wanted to express their concern.

“All kinds of people were calling wanting to know if we were okay,” said Donna Sinrich, who moved permanently to Highlands from South Georgia with her husband four years ago. She said the congregation decided having an interfaith potluck on the Friday after the Pittsburgh shooting would be the best way to bring together members of the community who wanted to show their support.

Instead of regular service, members of the congregation came prepared to answer five questions to be discussed at each table.

“No matter what our religious affiliation, the community was there to support us,” she said with a soft, Savannah accent. Gary Sinrich added, “It was a good show of brotherhood.”

Donna Sinrich said Pittsburgh didn’t make her more fearful because the synagogue has had security for a while. “We feel we are doing what we need to be doing,” she said. “To say we are very fearful, I don’t think so. We are cautious.”

Gary Sinrich gave an analogy of the concern someone might have after a neighbor’s house has been broken into.

“I don’t think the people in Pittsburgh thought they needed it,” he said. “There’s a fine line between safety and a fortress mentality.”

The Sinrichs unlocked the door of the synagogue to give a tour. The synagogue is in a nondescript building, nestled in the woods and out of view of the roadway. Neighbors could pass by it for a lifetime without knowing it was there, unless they had a peek inside. Colorful quilts with Hebrew letters sewn by elder members hang on the wall. During service, an elegantly carved wooden case holds a Holocaust-era Torah, a Jewish religious text rescued from Poland and is more than 200 years old. Aside from its religious value, safekeeping of the ancient religious text by the Mountain Synagogue is a sign of the strength of the congregation.

“It represents congregations that no longer exist,” said Donna Sinrich. “Franklin is a wonderful town. We don’t really see divisions. We meet, and we talk.”

The Sinrichs admitted their congregation is considering different ways to protect the community and quell the fears of some members. Of the debate about putting up a sign, Gary Sinrich said some people think it’s a good idea.

“Others think it’s a reason to destroy the signs, or mark them up,” he said. “You just don’t know and that’s the fear.”

Edelson is doing his part to balance the comfort levels of his congregation while also strengthening ties to leaders of other faiths, discussing best practices, and maintaining regular contact with authorities.

“We try to let people know we are here,” he said.

But, for now, there will be no sign indicating where Mountain Synagogue worships.

Becky’s Got a Gun

Roadside garbage a concern for some Coon Creek residents; county...