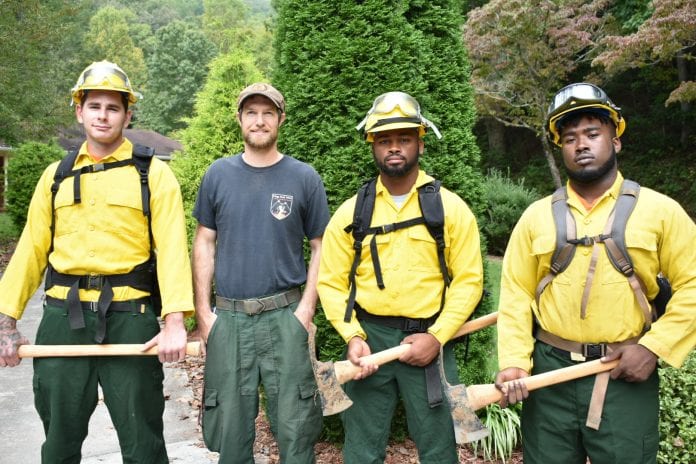 A rare gem is hidden in the mountains of Franklin that most people have not yet discovered. Only 131 of these gems are located in the U.S. and Franklin is one of those locations – the Lyndon Baines Johnson Civilian Conservation Center, better known as Job Corps.

Job Corps is located just 10 miles from Wayah Bald at 3170 Wayah Rd. The program offers career planning, job placement, driver’s education and English language learning.  Job Corps provides residential housing for men and women ages 16 to 25.  Students can choose from several trades offered and are able to obtain their high school diploma or equivalency, while enrolled in the program.  Included in the student package is food service, health and dental care, a bi-weekly basic living allowance and a clothing allowance.  For many of these students this is an alternative to traditional school, which for one reason or another didn’t work out.

LBJ offers several trade courses where students earn a certificate and go on to secure a job or continue their education to further advance in their chosen field. Obtaining a trade certificate in a high demand industry can lead to a lifelong career. The Franklin Job Corps offers several trades right on campus. Students can choose from welding, masonry, culinary arts, IT (information technology), painting, cement and facilities maintenance. Recently a new course has been added in which students are able to study to become fire fighters for the U.S. Forest Service.

In Franklin, the fire program is just getting started thanks to the dedication of the new Fire Crew Director Jamie Tyson. Tyson is certified to teach all aspects of firefighting required, in order for students to attend advanced training. He has been part of the U.S. Forest Service with the Fire Crew since 2006 where he was stationed at the Kentucky Job Corps Center. Another Job Corps is located in Oconaluftee in Cherokee that Tyson oversees also. Both programs are in their infancy but the hope is to grow the program to what it had been back in the 1990s. He said that the program just sort of dissipated and that now he wants to revive it.

In order to become a member of the Camp Crew, an integral part of the fire fighting program, students must pass an endurance test by being able to carry 45 lbs. of equipment for three miles in 45 minutes. Once that is accomplished they then take a class called Introduction to Wildland Firefighting.  This course is offered over a one week period for 8 hours per day. This will entitle students to obtain a basic certification to perform various duties regarding Wildland Firefighting

Upon completion of these criteria LBJ students have been deployed to several areas of the U.S. to help firefighters battle forest fires. This past year alone crews from LBJ Job Corps have been sent to Texas, Florida, Idaho and Utah. Camp Crews are a crucial element for firefighters on the front lines. The Camp Crews are in charge of supporting larger operations. They are the overseers of day to day needs such as equipment, truck loading/unloading, food preparation, building sign boards or whatever else the frontline firefighters might be in need of. Their rate of pay is $15.20 hour, working for 14 days, approximately 16 hours per day.  They are often in tents and exposed to the elements such as extreme heat or cold, freezing rain, and steep unforgiving slopes. Wildland Firefighting is strictly concerning fighting fires that burn the terra firma (ground), such as the devastating fires in California earlier this year.

Students are also able to take other courses to obtain an FF2 card which entitles the bearer to assist with Fire Suppression. This included digging barriers, extinguishing heat and turning the dirt embers. Their assignments last for two weeks and the rate of pay is $16.68 hr., for a 40 hr. work week. These students must purchase their own fire safety boots which can cost more than $200 pair. After completing the Camp Crew course and the FF2 courses, students who wish to continue their training are able to take the advanced firefighter training offered at alternate sites in the U.S.

John Getro, 22, a graduate of the LBJ Camp Crew program, said that when he was in Utah helping with the Bald Mountain Fire he met someone there who offered him a job as a diesel mechanic. Getro already had obtained his high school equivalency when he was just 16.  He is in the process of finishing up the Welding Certification Program. Students who enroll in the firefighter program are also required to complete a trade while on campus. Although he very much enjoyed his duties as camp crew personnel, he felt that he would be better served working as a diesel mechanic as his father was. He said had he not gotten the chance to go to Utah with the fire crew he would have missed out on a great opportunity.

Another student, Kwashon Adams, 19, who was also with the Camp Crew, said that it was hard for him to decide which road to take as far as careers were concerned. He breezed through his high school equivalency program scoring extremely high scores, received his Camp Crew Certification and is now finishing up with his Welding Certification. He was recently offered a job with a traveling welding company known as Steel Clad.

Xavier Hogan, 19, is another example of how Job Corps affects the lives of the students who attend the program.  He was also on the Camp Crew that went to several states. He said that helping out those firefighters made him feel important. He thoroughly enjoyed his time working on the Camp Crews and he racked up some decent money while doing so. He is just about to complete the Job Corps Program and then he will be joining the Navy. He feels that the skills that he learned through the Camp Crew deployments will serve him well in the military.

So, while not all students go on to advanced fire training, each student who enrolls in the fire program receives benefits that they might not have found elsewhere, including a substantial savings account for them to get started, in whatever career they might have chosen.

Students at Job Corps who do not enroll in the fire program are required to obtain their high school diploma or equivalency along with a trade certification. Of the 117 students who enrolled in the Franklin area Job Corps last year, 110 graduated. Graduates who complete both requirements (diploma and trade certificate) are paid $1,000 upon leaving the program, to help with housing or perhaps a down payment for a car. Students also receive $1 per day while attending the program. Many students are able to secure jobs in their trade without needing higher level education. There are those who choose to get their trade certificate and then enroll in college in order to start a business in the future. Trade certificates offer students, who might otherwise have fallen through the cracks, various ways to become productive members of the community.

Being involved in the community is an integral part of the Job Corps mantra. Students volunteer for programs such as the Macon Program for Progress Summer Lunch Initiative. Culinary arts students prepared the food for this program and also helped to serve it at the various locations throughout town. Other forms of volunteering include cleaning up the ball field at Franklin High School. Many were involved in assembling bicycles for the Toys for Tots Program. Still others were involved with the Conservation Field Day at Standing Indian and setting up and taking down chairs and tables at the BBQ festival at the Franklin fairgrounds. Several students built pottery kilns for the Boy Scouts of America and some assisted at the Chamber of Commerce office relocation project.

AmeriCorps is another offered program. When students enroll in AmeriCorps they volunteer to help with current issues facing communities such as poverty, education, public safety, housing, civil rights, and employment. AmeriCorps helps develop and mobilize resources that create long-term sustainable benefits at a community level.  Most of these programs of service last for 10 months to one year. Skill levels vary from those with high school diplomas to those with bachelor’s degrees. A modest living allowance is given to members and upon completion a $5,550 education grant is awarded.

Students are also placed in internships as part of the trade certification. Fire crews are placed in out of state wildfire sites. Other trade graduates are placed in administrative business operations support at local businesses. One young lady landed an internship at an Ecosystem Forest & Natural Resource Management System for aquatics training. Many other students take on part time jobs at local area establishments such as Huddle House, Burger King and Goodwill. Students are taught how to perform on the job through CTT (Career Transition Training) on site at LBJ. Presentations are also a part of the training that students receive from businesses, such as banks, which teach them how to handle credit and deal with other financial transactions, skills that are not usually taught even in high school.

LBJ Job Corps also has a Community Garden on site, where students learn about agriculture and take part in tilling, sowing and reaping the harvest.  Danny Davis is in charge of this program and food that is grown and harvested at the Community Garden is used by culinary students to help prepare meals for the residents and staff. This summer an abundance of tomatoes, peppers, cucumbers, zucchini, potatoes and more were grown and harvested by LBJ students.

Another prerequisite of the Job Corps program is that it is possible to take the ASVAB (Armed Service Vocational Aptitude Battery) in order to enlist in the military. LBJ has worked closely with the Navy and Army that recruits students who pass the test, into their branch of military. Other branches of service are also available for students who wish to join a different arm of the military.

So this gem, hidden deep in the mountains of Western North Carolina, is a very valuable resource for many young people who have struggled with issues involving traditional educational sites or who just want to learn a trade. Many students who already have a high school diploma often enroll in LBJ’s trade programs since college is not a road they want to pursue.  If you or someone you know is interested in finding out more about this comprehensive program, they may contact the LBJ Job Corps at (828)524-4446 to arrange a tour and meeting with a career counselor on site.

20 years of providing Christmas to those in need

Designer adds ‘flare to the square’ for Christmas